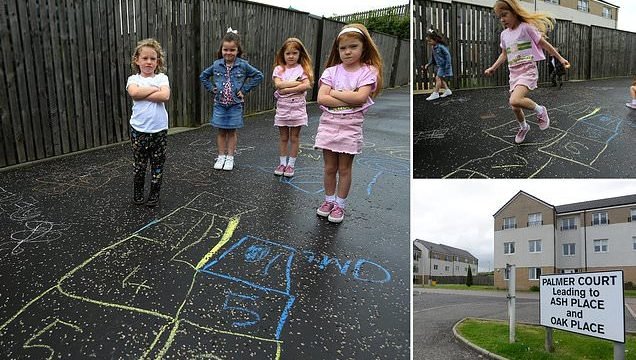 Furious parents have hit out at a property firm after it banned children from playing hopscotch on a Scottish housing estate.

Spiers Gumley demanded that children stop drawing hopscotch markings with chalk on monoblock areas of the estate in Bishopbriggs, East Dunbartonshire in a letter to residents.

The firm claimed the markings for the popular game, which has been played in Britain since the early-Roman period, were ‘detracting from the overall appearance’ of the estate. 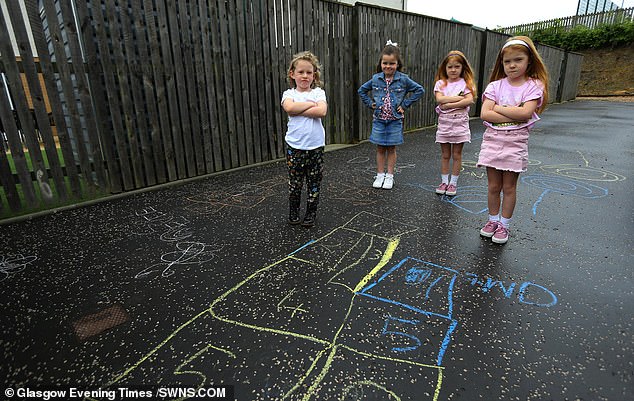 Furious parents have hit out at Spiers Gumley property firm after it banned children from playing hopscotch on the Bishopbriggs housing estate. Children are pictured next to the markings

But fuming parents say it is a ‘disgrace’ that children are being told not to play the popular game and the markings are ‘harmless’.

The letter from the company that manages the estate read: ‘I notice that children are being allowed to chalk all over the monoblock areas at the front of the development.

‘This detracts from the overall appearance of the development; therefore I would ask if these children belong to your family they refrain from this practice immediately.’

Bemused residents say the markings have been drawn on the pavement between townhouses and not the monoblock and say that the letter sent by the firm is ‘nonsense’.

A resident, who doesn’t wish to be identified, said: ‘It’s a disgrace to say that children chalking hopscotch detracts from the appearance of the development, when we have been raising issues with them regarding things that are more concerning than the estate’s appearance.

‘They are having a great time drawing with chalk in the path and it’s not harming anyone.

‘As soon as it rains it gets washed off – it’s not as if they are writing graffiti on walls. It’s nonsense for the factor to attempt to crack down on kids just having fun. What next? A curfew?’. 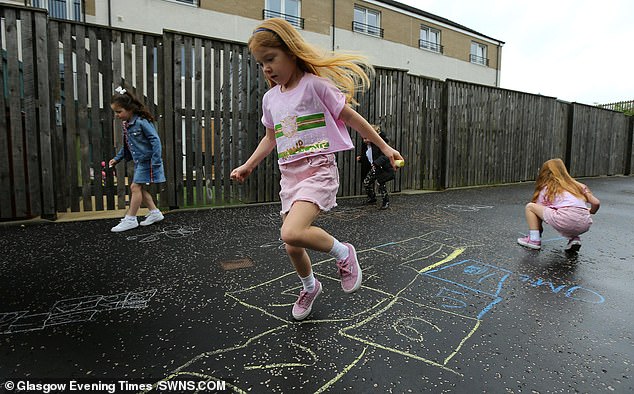 Parents in the Bishops Grove development said they would be ignoring the request in the letter.

‘When I first saw the letter I laughed and thought ‘no, this can’t be happening’.

‘They are scribbling in a small lane.

‘There are more issues in the area rather than just chalk.

‘You want to keep your children outside to keep them fit.

‘I’ve got twins and this is just ruining their fun.

‘I don’t think we’ll be telling them to stop having fun.’

Mother-of-one Suzanne Mitchell, 33, said: ‘It’s a joke.I just think it’s embarrassing that they would even put that out there and ask kids not to do that because it literally doesn’t do any harm.

‘There are bigger issues that are making this area look worse than chalk.’

Donald Macdonald, chairman of the Woodhill Residents Group, said the firm should ‘try to remember’ when they were children themselves.

He said: ‘We can’t have children having any fun, you never know where it’s going to lead, it could be fun one day and then enjoyment the next. It’s a slippery slope.’

‘The reason people come and live in Bishopbriggs is quite simple, the high quality of the schools attracts young families in the area.

He said that he wanted children to ‘go out and play responsibly’ and to be ‘encouraged to play outdoors’. 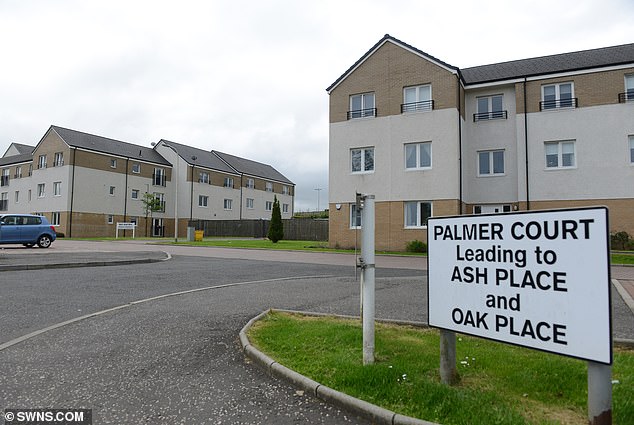 The firm claimed the markings of the popular game, which has been played in Britain since the early-Roman period, was ‘detracting from overall appearance’ of the estate (pictured) 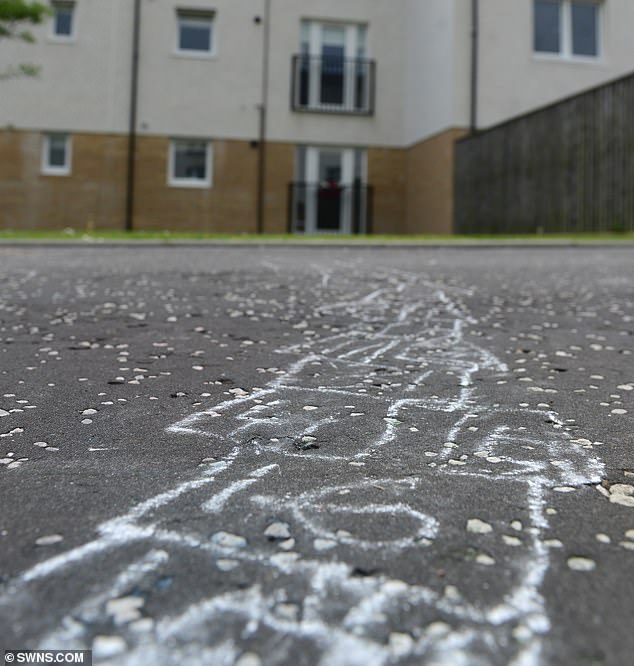 He added that it’s well documented that children are spending too much time indoors and on digital devices.

In the letter, Spiers Gumley, also asked residents to stop leaving children’s bicycles and toys on a grassy area  – because they were obstructing landscapers.

It also claimed various items including prams and toys are being left inside the shed area on the estate and asked for them to be removed, because the area is meant for the storage of cycles.

‘I have to say I am disappointed that such a letter was issued by Speirs Gumley and it was a poor judgement call on our part to do so. Admittedly, we do get these type of complaints from time to time in housing developments that we manage and, of course, we recognise that clients in the same development can hold differing views on how to resolve things. My view is that common sense should have prevailed and it should have been dealt with more sensitively by us.

‘This is all somewhat ironic given that Speirs Gumley is a big supporter of local charity PEEK, whose mission it is to improve the lives of children and young people by unlocking their potential through play and by being creative.

‘We will of course be apologising to our clients for the handling of this.’