The ABC's flagship radio news and current affairs programs are set to be permanently presented from areas outside of Sydney, Melbourne or Canberra for the first time.

Journalist Sabra Lane has been hosting mornings program AM from Canberra for three years. In January, she will relocate to Hobart and continue to host the show from there – but she will relinquish her role as the president of the National Press Club. 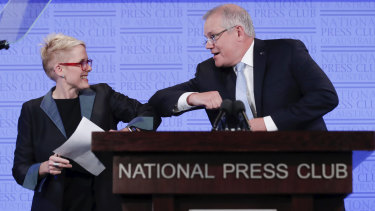 Lane, who was 7.30's political editor before making the switch to radio, said she has wanted to move to Tasmania for some time.

"A couple of years ago I fell in love with Tasmania and its glorious native forests and had a dream to move there," she said. "I asked if it was possible to present AM from Hobart and was delighted the answer was yes. I'll still be keeping a ferocious eye and ear on federal politics and national affairs."

The host of AM's sister program, PM, is also on the move. Linda Mottram, who has been presenting the evening news and current affairs show from the ABC's Sydney and Gosford studios for more than two years, is relocating to Bega next month.

"We've never been a family that sits still for too long. We've travelled the world to work and just on a whim," she said. "Our family has south coast history from way back and there has been a real pull.

"Planting PM in a regional centre will also bring a deeper understanding of rural communities."

The ABC says the relocations will help expand its footprint beyond Australia's major east-coast cities, but it's not yet known whether other roles at AM and PM will be relocated.

The public broadcaster's five-year strategy, announced in June, calls for $40 million to be saved through cost-cutting measures, as well as for more content-making roles to be shifted to regional Australia.

Under the plan, lifestyle division ABC Life will be rebranded as ABC Local and shift its focus to suburban and regional news. The 7.45am radio news bulletin has also been axed and hundreds of jobs are set to go as part of the broader restructure.

The ABC has long been accused of being too city-centric, with Communications Minister Paul Fletcher among the critics. On Friday, Mr Fletcher said he was pleased that two of the ABC's most senior and prominent journalists were relocating out of the major cities.

"The ABC is a national broadcaster serving all Australians," he said. "Yet the tendency is to have the biggest names based in our biggest cities. This move is a welcome step in the other direction."

Former ABC Radio Melbourne presenter Jon Faine said it's not about the location so much as the quality of the program.

"It's the output and the content that matters more than which studio it comes out of," he said.

AM is one of the ABC's longest-running current affairs radio programs. It debuted in 1967, with PM launching two years later.