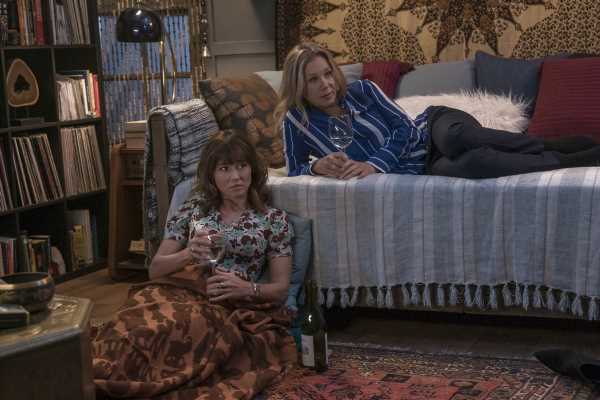 Early on in the new Netflix series Dead to Me, audiences are treated to several scenes of the two main characters Jen (Christina Applegate) and Judy (Linda Cardellini) bonding over bottles of wine and boxes of cake. They’re the kind of scenes of female friendship that audiences have seen before: scenes that offer a glimpse into the connections that women form over their creature comforts and emotional vulnerability. But, there’s something special about the scenes on Dead to Me, something that makes them ring especially true. The female friendship on Dead to Me is perfectly complex, and it’s in large part thanks to show’s primarily female perspective.

Dead to Me tells the story of Jen and Judy, who meet in a grief support group. They’ve both experience various types of loss in their lives, but they each deal with it in very different ways. While Jen is a bit hardened by the world, Judy embraces her softer, spiritual side. Despite their differences, the two characters grow closer and closer over the course of the first season.

In addition to the series’ female stars, the behind-the-scenes team was mostly female as well. Dead to Me was created by Liz Feldman and was partly inspired by her life, and the majority of the directors for each episode were female. That female perspective helped to give Dead to Me‘s markedly female story some added truth. Speaking with Elite Daily, Applegate and Cardellini talk about the what went on behind the scenes of Dead to Me, and how that positively impacted the female characters at the center of the story.

"[The series comes] from a female perspective, which is not to say that it’s going to be light or anything. It’s going to be raw and real," Applegate explains. "Female relationships are skewed sometimes when they’re written by men, unfortunately, because they have their own perception of what female friendship is like, and that’s not really the truth, especially when you’re dealing in trauma, when you’re dealing with these two women who are broken and find each other. There is such support there and it had to come from that real place." 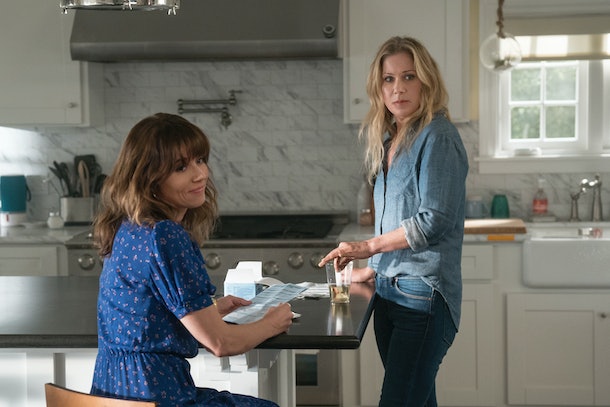 Not only did the female perspective impact the writing of Dead to Me, but it also helped to create a supportive environment on set. Both Applegate and Cardellini explain that the primarily female crew were able to work with them to help draw out the nuance of the characters’ emotions.

"I think sometimes in a workplace you try to keep it together as a female amongst males," Cardellini explains. "And I think when it’s predominantly female we can understand the complexities of each other’s emotions as very emotional, outwardly emotional beings. I don’t feel like that’s not part of being on a set with men as well. But I felt like there was a sort of sisterhood that we had on set that was comforting."

It’s important that the Dead to Me actors had that support on set because their characters and their relationships are filled with complexities, and so there was plenty to explore. Cardellini says, "[Our characters are] a lot of things at once. They’re strong and they’re weak. They’re emotional and resilient. There’s a lot about them, but they bond over grief."

Jen and Judy are new types of characters for both Applegate and Cardellini. While Applegate has mostly played comedic roles in the past, Jen is dealing with some heavier feelings. She explains that the role allows her to show off a "different facet" of herself. Meanwhile, Judy is a departure from some darker roles that Cardellini has been playing recently on series and in movies like Bloodline and Green Book. For each of them, that new emotional territory was ripe with opportunities to dig into they ways in which complicated women connect.

You can watch all of Season 1 of Dead to Me on Netflix now.