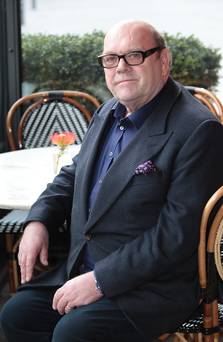 TV producer and former U2 manager Paul McGuinness has said that he hasn’t ruled out shooting a big screen hit in Ireland – and that one potential movie is already in the works.

After finishing a 35-year stint managing one of Ireland’s biggest bands, McGuinness made waves in the television scene with his sun-soaked Sky Atlantic show, ‘Riviera’.

The glamorous drama, which cost more than €40m to create, is back for a second season this month.

Season one, which aired in 2017, drew 20 million downloads and views, making it Sky’s best-performing original series. Speaking at the season two premiere in the contemporary Saatchi Gallery in London this week, McGuinness said that he hasn’t cancelled out the idea of filming a similar show in Dublin.

“Maybe we will get to Dalkey one day,” McGuinness told Independent.ie.

“But the weather is so good in the south of France, and you point a camera in any direction and its going look beautiful.

“I am dabbling in cooking up a couple of other TV projects and at least one movie that looks like it is going to go, but I have to wait till somebody gives me the money.

“One of the film projects starts out in Ireland and then, like all my projects, goes to the south of France.”

After a hit first season, executive producer McGuinness is already planning on returning for a third series – but admits that he originally felt “nervous” switching from the music industry to TV. “I was very nervous and it was a whole new world that I knew very little about,” he said.

“I knew about actors and I knew about films but I never had to make any, even though I was a kid when I started out, working in films in Ardmore studios and I later became one of the owners, so I suppose I had always been around.”

The first season of the thrilling drama, which aired in June 2017, left viewers gripping the edge of their seats as Georgina, played by actress Julia Stiles, sought to uncover the truth about her husband’s death.

This time around, the show’s highly anticipated return picks up in the immediate aftermath of the explosive first series finale, where the Clios family is faced with the tragic death of one of their own.

This season sees English model and actress Poppy Delevingne join the cast, and McGuinness said that television shows are “getting better” by allowing actors to help shape the roles.

“You don’t really know where you are going when you start, and the characters start to develop – not a life of their own – but the actors become as important as the writers.

“With each episode or every couple of episodes there is a new director, and the actors will say ‘oh she wouldn’t do that’ and you should listen and pay attention.

“More attention is paid to the actor’s opinion than is normal in conventional film making, and they love that.”

McGuinness believes that the reason the series is so attractive is because of the alluring appeal of the sunny French coast, alongside the glamorous lives of the super-rich.

“I think everyone is pretty excited about the south of France, if they know anything about it, it’s historically where rich people go to misbehave on yachts, misbehave in Ferraris, so there’s a vicarious aspect to it.

“We’re showing a version of the lives of rich, nasty, corrupt people who maybe do all the of things the rest of us would do if we could… like have affairs and shoot people.

“We always knew that the show would be rich people doing terrible things in beautiful locations, and that is what it has turned out to be.”

And while Brexit is still looming overhead, McGuinness doesn’t think that it will have an impact on shooting a potential season three.

“I think we can all survive Brexit no matter what happens,” he said.

“The show is financed out of the UK by Sky who are now American owned. They’re very good to deal. Sky sell it in every country in the world now and long may that continue.”

Riviera, starring Julia Stiles and Poppy Delevingne, returns to Sky Atlantic and NOW TV with more drama on the Cote d’Azur on Thursday May 23.