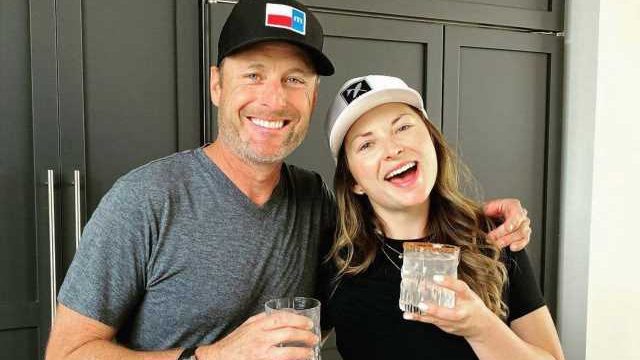 When celebrating his relationship milestone with Lauren Zima, the former host of the ABC dating series treats his fans to some sweet pictures of the two.

AceShowbiz –Chris Harrison is finally back on Instagram. Having been absent from the social media platform for around two months since his exit from “The Bachelor” franchise, the TV host made his return as he celebrated his third dating anniversary with his girlfriend.

On Saturday, August 7, the 50-year-old shared several images of him and Lauren Miza. The snaps saw the couple enjoying a beach day, hanging out on a boat, relaxing at home and taking a romantic stroll by the beach.

In the caption, Chris wrote, “Another incredible trip around the sun with this beautiful woman. @laurenzima I love you for your wisdom, strength, vulnerability, theatrics, compassion, advice, laughter, grace…your love. The only woman that can remain chic as s**t while doing a Voldemort impersonation.” He added, “I love you LZ Happy anniversary! Can’t wait to see what the next trip around the sun brings us.”

Also celebrating the relationship milestone was Lauren. Alongside photos of her and her beau, she noted, “HAPPY ANNIVERSARY, Chris Harrison. Three years of sunsets with you, and I’m feeling more blessed than ever that I get to live each day with you. You are an immeasurably incredible partner, and every time we look out into the night sky, I’m grateful we’ll greet and experience the next day together.”

“It’s cheesy, it’s romantic, it’s true,” the Entertainment Tonight correspondent continued. “I love you for all the right reasons : ) – for the man you are through and through. Cheers to the future! #happyanniversary @chrisbharrison.”

The special occasion arrived nearly two months after Chris announced that he quit “The Bachelor” franchise. He took the decision after defending former “Bachelor” contestant Rachael Kirkconnell over her past racist behavior in an interview with Rachel Lindsay.

On June 8, Chris declared on Instagram, “I’ve had a truly incredible run as host of ‘The Bachelor’ franchise and now I’m excited to start a new chapter. I’m so grateful to Bachelor Nation for all of the memories we’ve made together.” He then added, “While my two-decade journey is wrapping up, the friendships I’ve made will last a lifetime.”