Los Angeles: The FBI has launched an investigation after an American Airlines pilot said he saw what appeared to be a man flying with a jet pack Sunday night near Los Angeles International Airport.

"Tower, American 1997. We just passed a guy in a jet pack," the first American Airlines pilot states as he puts a call in to the control tower. 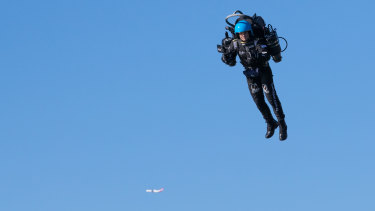 "American 1997, OK, thank you. Were they off to your left or right side?" the tower operator answers.

"Off the left side, maybe 300 yards or so, about our altitude," the pilot responds.

"We just saw the guy pass us by in the jet pack," a second pilot from Jet Blue Airways then tells the tower, which warned another pilot about the sighting.

The controller then advised another aircraft flight crew to use caution.

FBI spokeswoman Laura Eimiller said Tuesday that agents at LAX were investigating after the pilot reported the incident to the control tower.