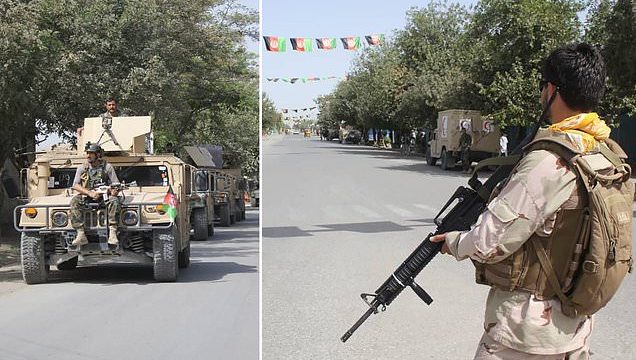 The Taliban launched a large-scale attack today on Kunduz, one of Afghanistan’s main cities, killing at least 15 people and wounding more than 75 others.

It comes as the insurgent group continues negotiations with the US on ending America’s longest war.

The militants, who have demanded that all foreign forces leave Afghanistan, now control or hold sway over roughly half of the country and are at their strongest since their 2001 defeat by a US-led invasion. 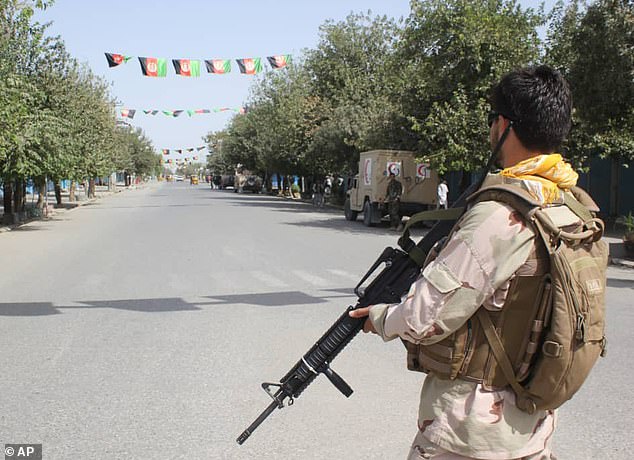 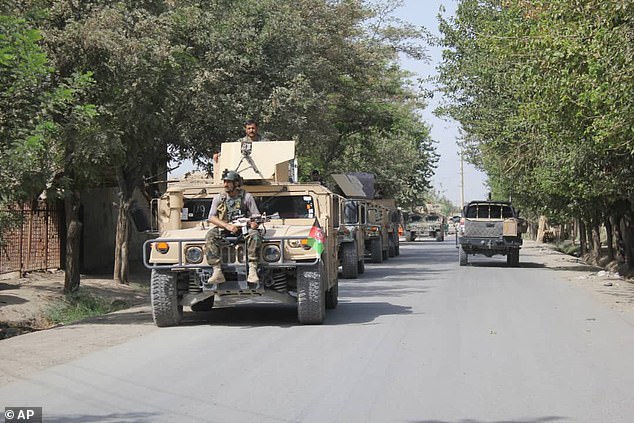 Attacks such as the one seen today are seen as strengthening their negotiating position.

The US envoy in the talks, Zalmay Khalilzad, said in a Twitter post that he raised the Kunduz attack with the Taliban and told them ‘violence like this must stop.’

He is expected to visit Kabul on Sunday to brief the Afghan government.

A suicide bomber detonated his explosives at the main intersection in Kunduz after hours of efforts by Afghan security forces to push the militants into the city’s outskirts.

The Taliban quickly claimed responsibility for the bombing, which occurred after the defence and interior ministers visited Kunduz and asserted that Afghan forces had repelled the attackers. 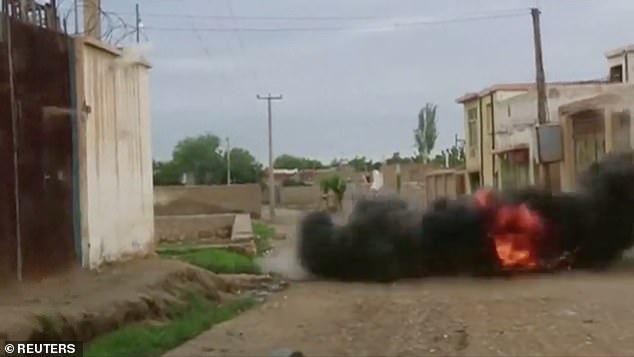 The commander of US forces in Afghanistan, Gen. Scott Miller, also visited the city, Khalilzad said.

Afghan officials confirmed casualties among security forces in the day of fighting but did not say how many and said at least 60 Taliban fighters had been killed.

As night fell, they said gun battles continued on the outskirts of Kunduz, a strategic crossroads with easy access to much of northern Afghanistan as well as the capital, Kabul, about 200 miles away.

The bodies of at least three civilians and two members of the security forces were taken to the Kunduz hospital earlier in the day and at least 80 wounded civilians of all ages were treated, including women and children, said the provincial health director, Esanullah Fazeli. 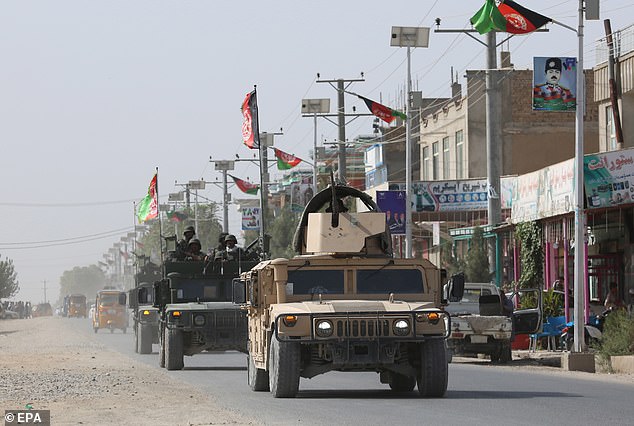 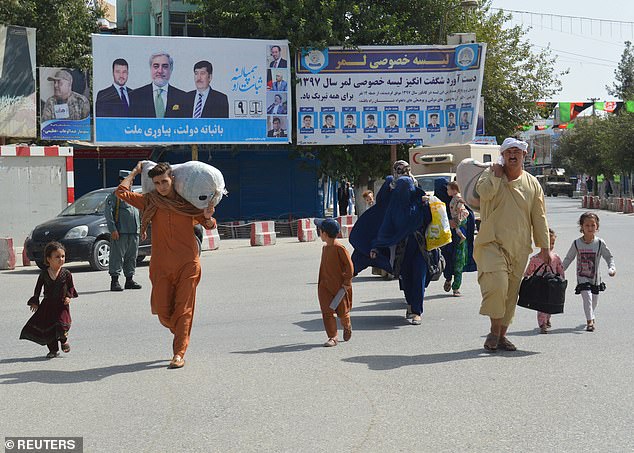 People leave an area during a Taliban attack, in the downtown of Kunduz city

Rabani said the insurgents briefly took control of the hospital, but Fazeli said the fighters left after staffers told them the patients could be hurt in any cross fire.

‘In a way we are thankful that the Taliban accepted what they were told,’ he said.

The Taliban have continued bloody assaults on civilians and security forces even as their leaders meet with Khalilzad in Qatar to negotiate an end to nearly 18 years of war.

Talks continued today and Afghanistan’s chief executive, Abdullah Abdullah, said Khalilzad would visit Kabul on Sunday to brief the government. Both the US and Taliban in recent days have signaled they are close to a deal. 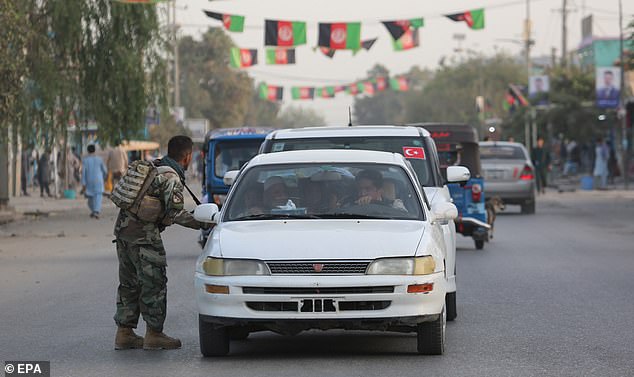 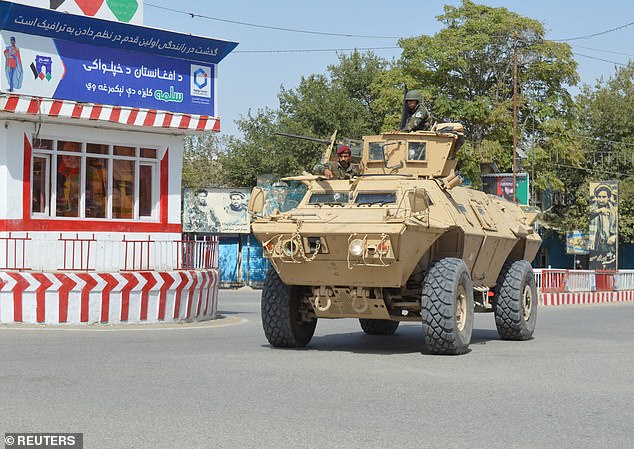 One Afghan analyst, former deputy interior minister Mirza Mohammad Yarmand, said the attack on Kunduz showed the Taliban are not interested in a ceasefire, which has been a key issue in the Qatar talks.

The United States has also sought Taliban guarantees that Afghanistan will no longer be a launching pad for terror attacks such as 9/11. The Taliban government had harboured al-Qaida leader Osama bin Laden.

Some 20,000 US and NATO forces remain in Afghanistan after formally ending their combat role in 2014.

They continue to train and support Afghan forces fighting the Taliban and a local affiliate of the Islamic State group. 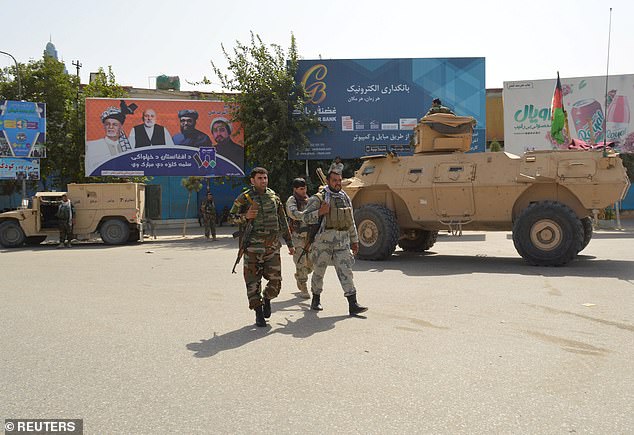 Many Afghans worry that an abrupt departure of foreign troops will leave Afghan forces vulnerable and further embolden the Taliban, who already portray a US withdrawal as their victory.

‘We have lost the city in the past and know the Taliban can attack again from insecure areas,’ a lawmaker from Kunduz, Fatima Azizi, told the local Ariana television channel on Saturday.

‘Unfortunately, civilians are again the victims,’ she said.

The Taliban seized Kunduz, at the heart of a major agricultural region near Tajikistan, for around two weeks in 2015 before withdrawing in the face of a NATO-backed Afghan offensive.

The insurgents pushed back into the city center a year later, briefly raising their flag before gradually being driven out again.