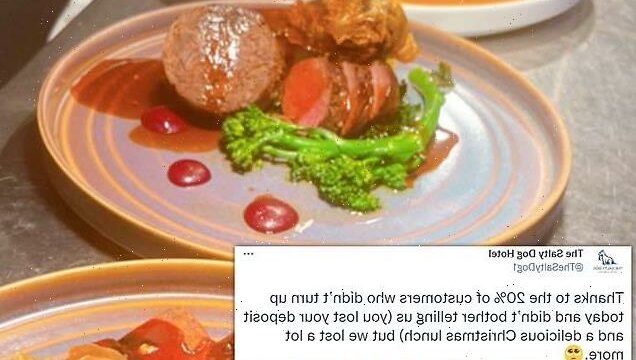 ‘Thanks to the 20% who didn’t turn up and didn’t bother telling us’: Pub bosses hit out at customers for failing to turn up for Christmas dinners – as industry pleads with Boris Johnson not to bring in New Year’s Eve restrictions

Pub bosses have hit out at customers for failing to turn up for Christmas dinners.

The Salty Dog Hotel and Bistro in Bangor, Northern Ireland, tweeted: ‘Thanks to the 20 per cent of customers who didn’t turn up today and didn’t bother telling us.

‘You lost your deposit and a delicious Christmas lunch, but we lost a lot more. We have never in ten years had Christmas Day no-shows.’

Has your business experienced no-shows?

MPs and hospitality bosses have warned Boris Johnson not to bring in new restrictions before New Year’s Eve or risk ‘devastating’ businesses.

The Prime Minister will tomorrow be presented with the latest data on hospital admissions and could rule on whether to clamp down further to limit the spread of Omicron.

It comes after papers released by the Scientific Advisory Group for Emergencies (Sage) on Friday included modelling for tighter restrictions from December 28 or New Year’s Day which could last as long as March 28.

Last night Tory MPs issued a warning shot at Mr Johnson and his Government to resist any lockdown measures. 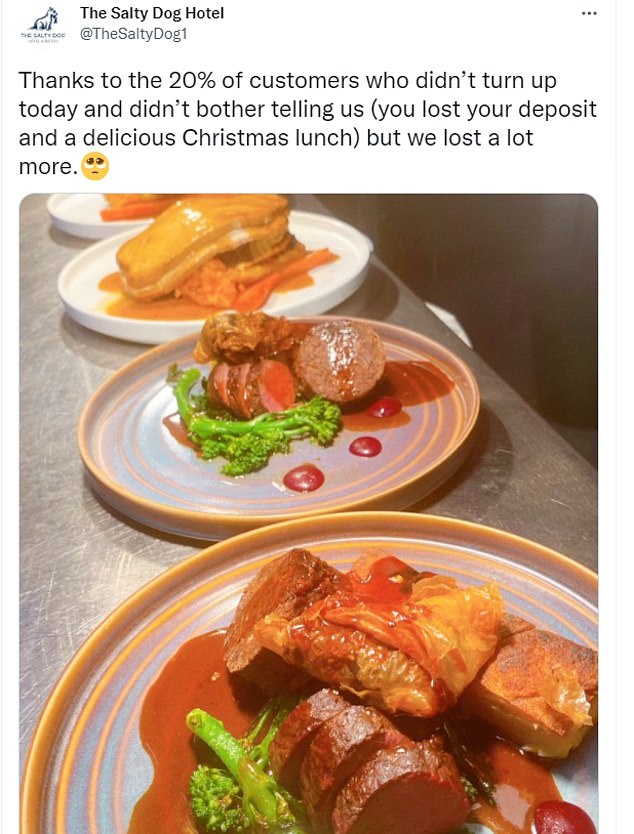 The Salty Dog Hotel and Bistro in Bangor, Northern Ireland, tweeted: ‘Thanks to the 20 per cent of customers who didn’t turn up today and didn’t bother telling us’ 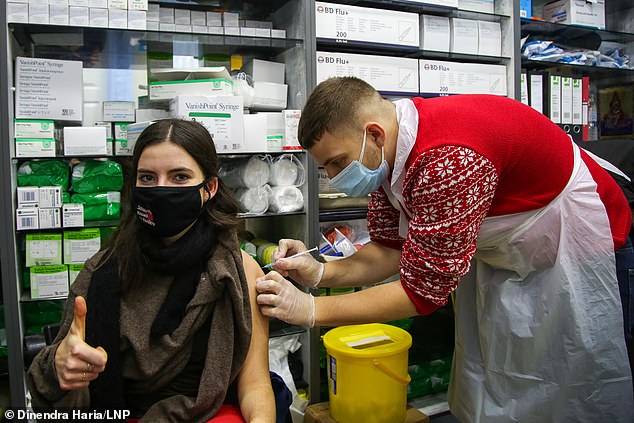 One MP, who is a member of the Tory backbench Covid Recovery Group, said: ‘If it turns out that Cabinet Ministers last week just delayed more business-crushing, illiberal restrictions till after Christmas, then not one of them deserves my vote in a future leadership election.’

Separately another Tory MP, Alec Shelbrooke, said of the Sage papers: ‘Despite this new warning, the Prime Minister must stand firm and refuse to impose new restrictions this week.

‘We’ve had dire forecasts before that have not come true. There is no justification for ruining people’s New Year celebrations and inflicting yet more damage on our economy.’

Following studies last week that showed Omicron is significantly less likely to cause hospitalisation than the Delta variant, Mr Johnson is not expected to bring in legally binding restrictions or lockdown measures.

In a more likely scenario the Prime Minister could issues guidance telling people to limit their contacts. 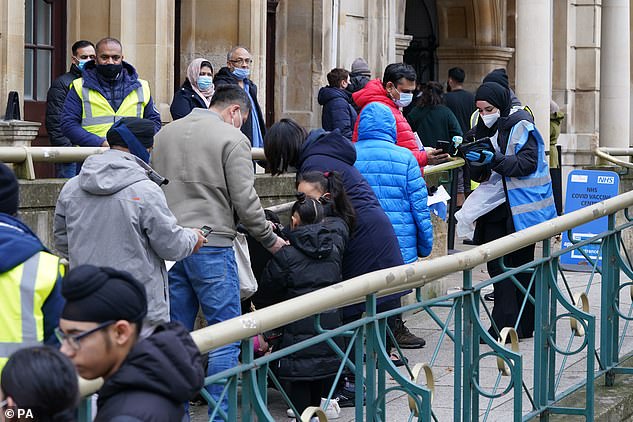 But writing in The Mail on Sunday, Sir Graham Brady, who chairs the influential 1922 Committee of backbench MPs, warns Mr Johnson not to do anything to ruin New Year’s Eve plans.

‘Enough is enough,’ he writes. ‘There must be no new unnecessary restrictions this week whether the PM sees fit to recall Parliament for an emergency session or whether he resorts simply to more guidance.’

Kate Nicholls, chief executive of trade association UK Hospitality, said: ‘For many beleaguered hospitality businesses the New Year period is the last chance they have of making some much needed revenue to be able to get them through the lean months of January and February.’

Michael Kill, chief executive of the Night Time Industries Association, said: ‘The uncertainty is killing our sector at the moment.

‘If the Government closes businesses for New Year’s Eve, people will simply gather in people’s households or at illegal events and it’s going to be counterproductive.’

Des Gunewardena, chief executive of the D&D London group, which owns 40 venues including Bluebird and Le Pont de la Tour, said: ‘New Year’s Eve is massive, it’s the biggest night of the year for us across all of our restaurants.’

Meanwhile the head of the Roman Catholic Church in England and Wales has urged the Government not to close churches and places of worship once again.

Speaking to the BBC, Cardinal Vincent Nichols said: ‘I think this country has shown that people can make good judgments themselves.

‘We’re at that point of saying we understand the risk. We know what we should do. Most people are sensible and cautious. We don’t need stronger impositions to teach us what to do.’

But a Government source told The Mail on Sunday there is a ‘danger’ that people who were careful in the run up to Christmas to be able to see their loved ones will start mixing more after today. 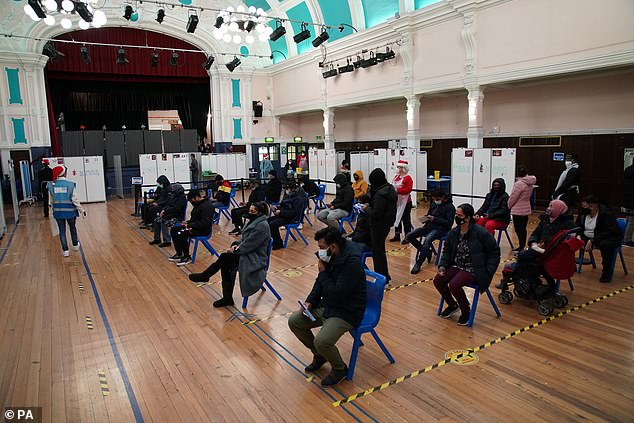 However the source said the overall picture on Omicron is ‘more optimistic than people thought’.

Tomorrow a ‘Covid-O’ committee of Ministers and officials will discuss the frontline staff shortages as a result of Omicron spreading.

The meeting will include Chancellor Rishi Sunak and Health Secretary Sajid Javid.

The appeals from MPs and business leaders came as new Sage papers and fresh modelling warned that Omicron may yet lead to a higher peak of hospitalisations than last winter’s – despite its lower severity and widespread vaccination.

But although three UK studies last week found that Omicron was much less virulent than Delta – between 15 and 70 per cent less likely to lead to hospitalisation – Sage cautioned against optimism.

It warned these figures were largely based on younger people who have formed the bulk of infections so far.

Unvaccinated people who catch Covid are up to 60 times more likely to end up in an intensive care ward than those who have been jabbed, startling figures reveal.

And the difference that vaccination makes to the chance of needing intensive care is starkest among older people – who are more likely to suffer serious Covid illness in the first place.

Figures from the Intensive Care National Audit and Research Centre (ICNARC), which covers units in England, Wales and Northern Ireland, show that between May and November the rate of admission for double-jabbed Covid sufferers in their 60s was just 0.6 cases per 100,000 people per week.

But among people of the same age who remained unvaccinated, the rate was 37.3 per 100,000 per week – equating to a relative risk about 60 times higher.

Among those in their 50s and 70s there was almost a 30-fold difference in average weekly admission rates between the vaccinated and the unvaccinated.

In younger age groups the difference was lower but still marked – unvaccinated people in their 30s and 40s were between ten and 15 times more likely to end up in intensive care with Covid than those who had received their jabs.

Last night an intensive care consultant in London said the unvaccinated were putting ‘extra pressure’ on intensive care units (ICUs), which also care for people with a wide range of problems from accidents to medical emergencies.

The doctor, who wished to remain anonymous, said: ‘Their presence puts extra pressure on our service. If these people had been jabbed they would be enjoying their Christmas and not filling our wards. The worry is more unvaccinated with Omicron coming through our doors.’

Even though people who have forsaken the jab make up only seven per cent of the country’s adult population, they are now responsible for the lion’s share of Covid admissions to ICUs.

Separately, a survey by the Intensive Care Society found that at least two-thirds of Covid patients were unvaccinated in 12 of 16 ICUs they asked.

At present, between 25 and 30 per cent of some 800 intensive care beds in London’s hospitals are filled by Covid patients, which is thought to be slightly higher than the national average.

Last week Health Secretary Sajid Javid urged unvaccinated people to ‘think about the damage that they are doing to society’.

He told Sky News: ‘They take up hospital beds that could have been used for someone with maybe a heart problem, or maybe someone who’s waiting for surgery. But instead of protecting themselves and protecting the community, they choose not to get vaccinated.’

The consultant said despite Omicron being less likely on average to cause serious illness than Delta, there was nothing ‘mild’ about it for those who did need hospital treatment.

Those who end up in hospital after catching the variant are ‘quite unwell and many need oxygen continuously through a mask’, he said.

‘People should know that having to be admitted to hospital with Omicron means they are seriously ill,’ he added ‘These people are quite sick and some of them have reached intensive care.

‘But even being on a general ward with this mutation requires a lot of treatment to get people better again. Typically, they are going to be in hospital for a couple of weeks.

‘So my message to anyone who thinks it’s not worth getting vaccinated or is not fully protected, is to get jabbed because you could be one of those who ends up spending weeks in hospital.’

About three-quarters of a million people are thought to have spent Christmas self-isolating due to record numbers testing positive for Covid in the previous week.

In the seven days between December 18 and 24, the UK recorded 707,306 new confirmed Covid infections.

In addition, thousands more will have received a positive test result yesterday – brutally cutting short their Christmas celebrations as rules stipulate that individuals must self-isolate immediately.

Among those in that unfortunate boat was rower and adventurer James Cracknell, 49. 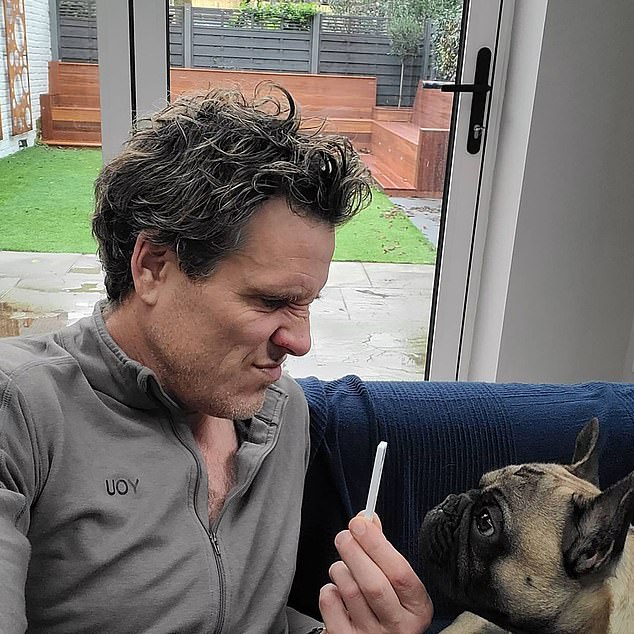 Among those in that unfortunate boat was rower and adventurer James Cracknell (above), 49

At lunchtime the double Olympic champion tweeted: ‘Santa dropped off what I’d been “waiting all year for”. Covid.’

Accompanying his downbeat message was a picture of his dog, Dug, clearly keen on being taken for a walk, and Cracknell showing him his positive lateral flow test.

He added: ‘Trying to explain to Dug that I’m not just lazy. He’s not buying it. Have a fantastic Christmas everyone.’

He said that although jabs were ‘spectacularly good at stopping severe disease and death’, they were less effective at preventing infection and mild illness.

Until last week people with Covid had to self-isolate for ten days following a positive test result.

However, that was downgraded to seven days as long as the person tests negative on a lateral flow test on day six and day seven of self-isolation.

SOUTH Africa has scaled back contact-tracing and requirements for people to self-isolate as it moves towards living with Covid rather than trying to contain it.

The government announced a raft of changes on Friday including that people who have been in contact with a confirmed Covid case no longer have to isolate if they show no symptoms.

They need only to monitor their health for five to seven days and avoid large gatherings.

All quarantine in facilities outside the home is to be stopped, while contact tracing efforts will be scrapped apart from in specific scenarios such as tracking cluster outbreaks.

Deputy health minister Sibongiseni Dhlomo told broadcaster SABC the move was ‘based on advice from our scientists that it is not really having an impact any more’.

Harry Moultrie, of the country’s National Institute for Communicable Diseases, welcomed the changes.

South Africa’s health department cited the emergence of the highly infectious, but milder Omicron strain as one of the reasons for the change.

Other reasons were that at least 60 per cent of the population has some form of protection from vaccination or because they have previously been infected.

Daily Covid cases in Gauteng province, where Omicron first exploded, have been in retreat for more than a week despite the lack of strict social-distancing laws, leading to hopes that the variant’s natural course is a sharp but short wave of infection.

South Africa, which has 60 million people compared to the UK’s 68 million, has recorded almost 91,000 Covid-related deaths while the UK’s figure is just under 148,000.