Telling anyone you’re off to the Melbourne Royal Show is akin to saying you like Simply Red or those spearmint leaf lollies. People are surprised or suspicious. They rewind your words and tone for irony. They wonder if you need a tiny lie down. They just don’t get it.

For decades, I didn’t either. Cranking out grazing platters in a beachside Victorian joint, I was a show snob. The show was for bogans. Awash with depressing giant teddies and Britney Spears “Curious” perfume, it wasn’t for me and my kids in their Osh Kosh b’Gosh overalls from Daimaru. 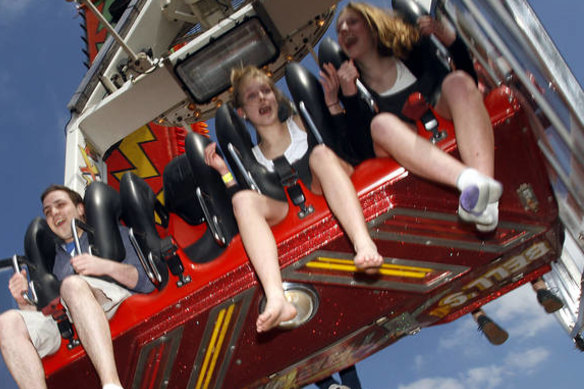 I wasn’t much of a show fan. I thought it was for bogans. How did I get it so wrong for so long?Credit:Luis Enrique Ascui

Perhaps it was because I didn’t grow up with it. Even though the first photo of my parents together is them aged seven at the Melbourne Show in the 1940s, my only memories of going as a kid are of Dad trailing behind grimly with Bertie Beetle showbags as Mum warned against dangerous rides.

Then my friend Amanda bought a house in the shadow of Adelaide’s showgrounds and had a crack at show cooking. Her trio of unbaked slices won a blue ribbon. Hooked, she sucked me into the show culture which eventually led me back to Melbourne.

My daughter and I started flying over to Adelaide every year with our cooking entries. Chocolate cakes on laps, Anzac biscuits in bubble wrap. There was triumph – a second place red ribbon for Florentines, a win in a junior section – but also heartbreak.

One year we went to the wrong gate at Tullamarine and had to leg it to the other end of the terminal. The running decimated Sadie’s entry, a jar of decorative mixed fruits and legumes in a spiral design which had taken an anxious week to perfect. She tipped it out on Amanda’s floor and redid it hours before entries closed. 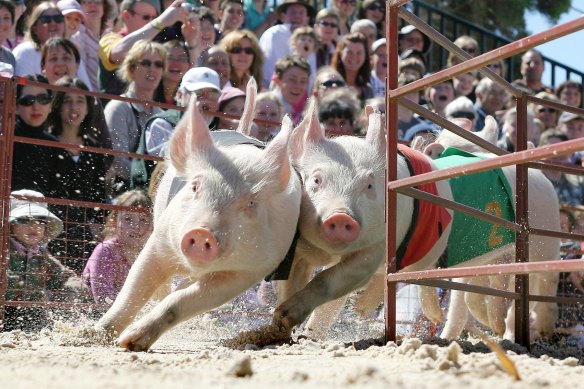 We expanded from cooking. One year we walked in the show’s opening parade dressed as flowerpots. We volunteered at the CWA cafe in floral pinnies. Some of the ladies were rightly suspicious of our city pedigree – what would People from Melbourne know about South Australian hospitality?

Serving zillions of scones was what tipped the balance for me with shows. I was slow on the uptake, but eventually realised the glitzy carnival bits are just the urban window dressing. At the heart of shows are rural skills and traditions. Dry wit. Secret recipes. Dusty RM Williams boots. Shows are as classic, timeless, authentic as the Tenterfield Saddler. Not bogan. How did I get it so wrong for so long?

My husband needed no converting, despite his Malvern roots. In his twenties, he ran a big rural outfitter’s stand at shows around Australia. Once a nine-year-old came in to road test a six foot whip. A crowd gathered as the check shirted prodigy cracked away: “I usually practice on snakes.” 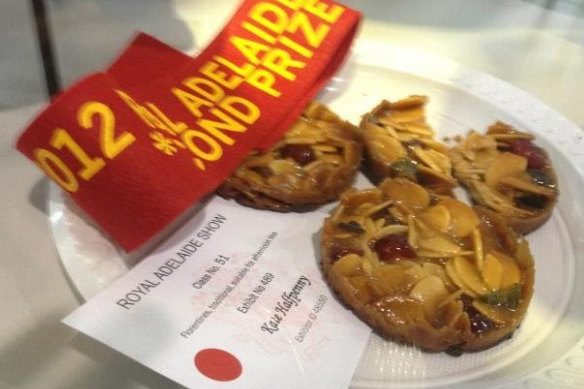 Kate Halfpenny’s Florentines for which she won second prize.

So we started what has become a treasured annual outing. We rock up early and head for the dog pavilion where you can simultaneously check out dogs doing obstacle courses and breed owners doing magic with Taft hairspray. Then it’s the woodchop followed by a $3 cheese toastie, eaten in the stands of the equestrian arena. After lunch, we do the sheep, cattle, poultry, craft and cookery, and wrap it all tasting truffle aioli and checking out the gorgeous Kewpie dolls.

This year’s show feels precious thanks to two lost COVID years. My husband took the Show hiatus harder than the pandemic threat of losing our frequent flyer points. He tuned in for days to the live farm cam that ran in lieu but it lacked the noise and lanolin and fried food smells of the real thing.

You’ll get so much more out of it than you spend. We always do. One year, heading for the exit, we realised the guy warming up on the main stage was Barnesy.