The Victorian Liberal Party is facing a second probe over its fundraising activities following a “Ditch Dan” blitz last month which raised more than $500,000 for the opposition’s state election campaign.

The Victorian Electoral Commission, which is responsible for enforcing the state’s strict political disclosure rules, is conducting an inquiry into whether the Liberal Party breached electoral laws by failing to disclose within the mandatory 21 days that it collected 28 donations worth about $54,000 during the fundraising push. 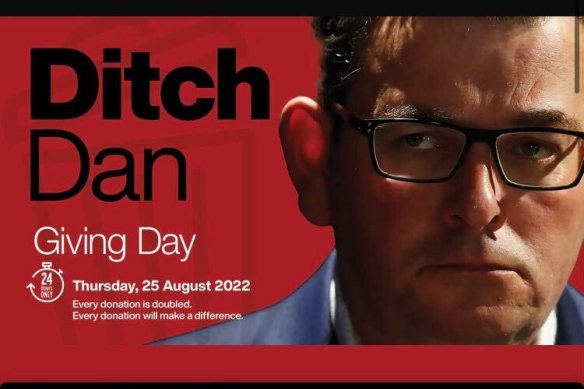 The advertising campaign ran on August 25.

On Thursday, Liberal state director Sam McQuestin said that the “Ditch Dan” event, held on August 25, involved the use of a “third party” entity to collect the donations.

He insisted the entity did not send the cash raised to the Liberal Party’s campaign coffers until last Friday, meaning the 21-day disclosure period began on September 16, about three weeks after the actual event.

“We will easily have [the donations] in the system within 21 days of that date,” he said.

Under Victoria’s new donations laws, spruiked by Labor as the toughest in the country, individuals and political parties who make or receive donations of $1080 or more must disclose it to the electoral commission within 21 days.

In addition, donations of $1080 or more cannot be anonymous, and donors cannot donate more than $4320 in any four-year period between elections.

Opposition Leader Matthew Guy was last month ordered to hand over documents to the commission after his chief of staff Mitch Catlin resigned following a report by The Age that revealed he sought $100,000 in payments to his private marketing company in addition to his salary in a draft contract that was never signed. 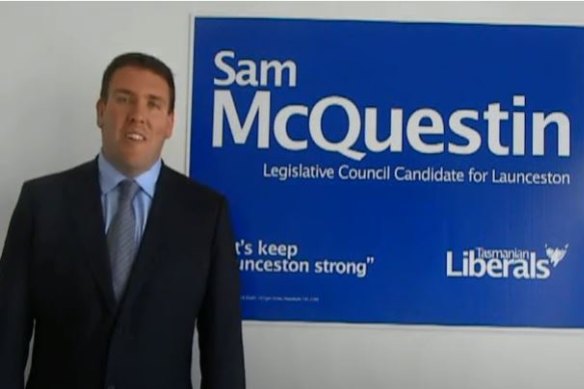 The Liberal fundraising website for the August 25 event – ditchdanandrews.com – urged party faithful to stump up to “ensure Matthew Guy and his team have the resources they need to defeat Daniel Andrews and Labor, so Victoria can recover and lead”.

The fundraising event raised $598,747 – half of which came from donors during the day and half from other donations raised before the event – as part of a marketing promise to match any donations dollar for dollar.

The website includes details of 2295 donations, many of them made anonymously. While most were relatively small amounts, below the disclosure threshold, more than 20 exceeded the $1080 threshold.

Twitter user @Aaronsmith333 tracked the donations and compared them with those officially disclosed on the electoral commission website 21 days after the fundraising event.

The Age has also cross-checked the donations published on the “Ditch Dan” website with Liberal donations disclosed to the commission. By Thursday afternoon, none of the donations had been disclosed.

The Age was unable to ascertain which third-party entity collected the money for the Liberal Party. So-called third-party entities and associated entities with direct formal links to political parties are also required to operate under the state’s disclosure rules.

In an unusual public intervention, the electoral commission late last week issued a statement on Twitter revealing it was “inquiring into the matter”.

In a statement provided to The Age on Thursday, a spokesperson for the commission said: “At this stage we make no assumptions, but are seeking co-operation from those responsible for the campaign in making sure that only lawful donations were accepted and disclosed.

“We do not comment on any active investigations. However, we take the regulation of political donations seriously and in the lead-up to state election, we’ll continue to monitor and follow up on activities that may constitute an offence against the Electoral Act.”

The spokesperson added that knowingly making or accepting an unlawful political donation was an offence that could involve a penalty of $50,000 and or a two-year prison sentence. The donation would also be forfeited and any public money the recipient may be entitled to could also be reduced.

The electoral commission said on Twitter, in the wake of the fundraising campaign, that it had asked the Liberal Party to provide an explanation as to how the campaign would comply with Victoria’s electoral laws.

“The VEC is already aware of a donation site running a 24-hour ‘double donation’ campaign,” it said. “We have sought assurances as to how donors and recipients in this campaign will comply with donation requirements under the Electoral Act”.

Centre for Public Integrity director of research Catherine Williams said Victoria’s 21-day disclosure period was one of the best in the country, but the time allowed was still “far too long”.

She said the state should at least aim to adopt the Queensland system, where donations must be disclosed within seven days generally, or within 24 hours during an election campaign.

“In Victoria we should be working towards genuine real-time disclosure of donations in order to facilitate meaningful transparency of political finance,” Williams said.