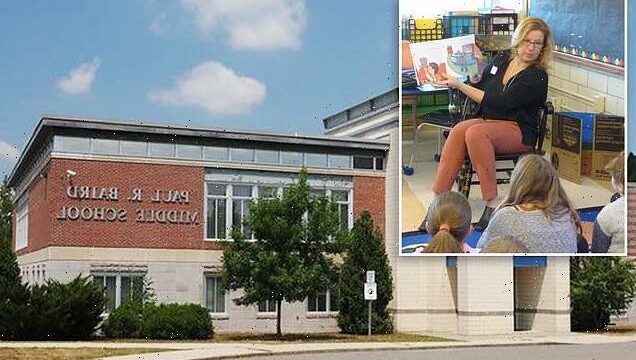 Parents of middle school kids have filed a federal lawsuit alleging that a Massachusetts school district violated their rights by keeping children’s gender-nonconforming status a secret from them.

The suit was filed on Tuesday in US District Court, accusing the the Ludlow School Committee and school administrators of violating due process and religious freedom with their gender identity policies.

The plaintiffs in the case are two sets of parents: Stephen Foote and Marissa Silvestri, and Jonathan Feliciano and Sandra Salmeron.

The parents allege in the suit that staff and administrators at Paul L. Baird Middle School actively concealed their children’s gender-nonconforming status and new pronouns, violating their parental rights. 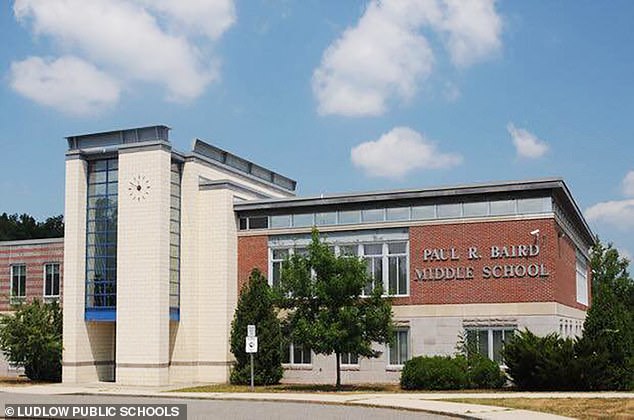 Feliciano and Salmeron’s children are not specifically mentioned in the suit, but they allege that the district’s policy on gender identity violates their right to free exercise of religion.

They say that their sincerely held religious beliefs require truthfulness, obedience to parents, and that they believe children are created as either male or female.

Ludlow Interim Superintendent Lisa Nemeth, who is named as a defendant, declined to comment when reached by DailyMail.com, saying the district does not comment on pending litigation.

Ludlow School Committee chairman James ‘Chip’ Harrington also declined to comment specifically on the suit, but referred to comments he made to MassLive saying he believes parents should always have ‘a seat at the table’ when it comes to important decisions for their child’s physical or mental health.

‘It’s a slippery slope. We want to support our students the best we can. But we should bring parents to the table, and hope they respond in a loving and supportive way as well,’ Harrington told the outlet.

The narrative of the 58-page lawsuit focuses mostly Foote and Silvestri’s biological female child, identified only as B.F.

The suit says that B.F., then an 11-year-old sixth grader, was given an assignment with others in her class in September 2019 to make a video describing their gender identity and preferred pronouns.

‘The videos of their children were created without the parents’ knowledge or consent and it remains unknown how these videos were used or who was allowed to view them,’ the suit states. 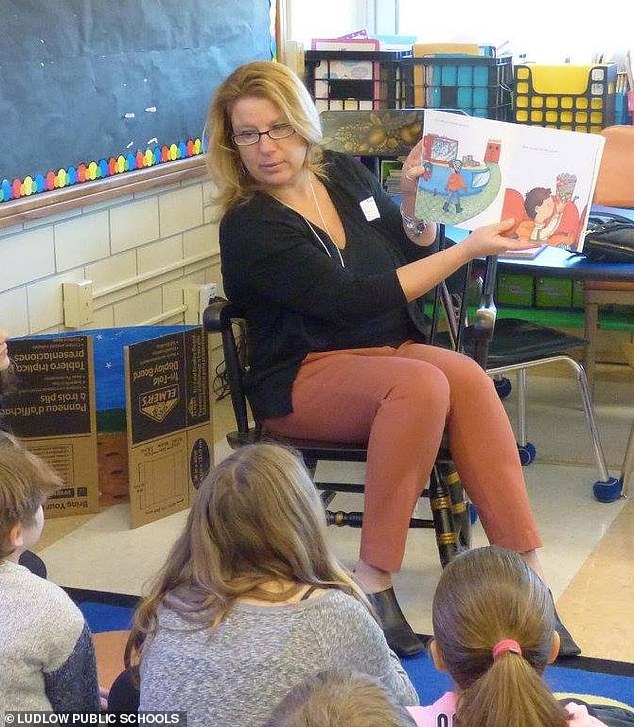 Ludlow Interim Superintendent Lisa Nemeth, who is named as a defendant, declined to comment, saying the district does not comment on pending litigation

B.F. also told the teacher that she believed she was attracted to other girls, and had been watching YouTube videos saying that she was born that way. The child added that she was not sure how to talk to her parents about getting help, the suit says.

With the student’s agreement, the teacher contacted her mother Silvestri to share concerns about her mental health, and B.F.’s parents retained a therapist to help the child, the suit says.

According to the complaint, on December 20, 2020, Silvestri sent an email to several of B.F.’s teachers and members of the school committee, thanking them for their concern but requesting: ‘do not have any private conversations with B. in regards to this matter.’

‘Please allow us to address this as a family and with the proper professionals,’ the mother wrote.

Silvestri sent an email to several of B.F.’s teachers and members of the school committee asking them to let her family and therapists address her mental health issues

Two months later, in February 2021, the complaint states that B.F. sent the following email to teachers, administrators, and the school counselor:

‘Hello everyone, If you are reading this you are either my teacher or guidance counselor. I have an announcement to make and I trust you guys with this information.

‘I am genderqueer. Basically, it means I use any pronouns (other than it/its). This also means I have a name change. My new name will be R****. Please call me by that name. If you deadname me or use any pronouns I am not comfortable with I will politely tell you. I am telling you this because I feel like I can trust you.

‘A list of pronouns you can use are: she/her he/him they/them fae/faerae/aer ve/ver xe/xem ze/zir. I have added a link so you can look at how to say them. Please only use the ones I have listed and not the other ones. I do not like them. Thank you. R*** Foote.’

The lawsuit alleges that the guidance counselor ‘replied all’ to the email instructing teachers not inform the student’s parents of her new pronoun preferences or gender identity.

The suit alleges that school staff complied, but that when the parents finally learned of the matter, they became upset and demanded that the issue be handled as a private family matter. 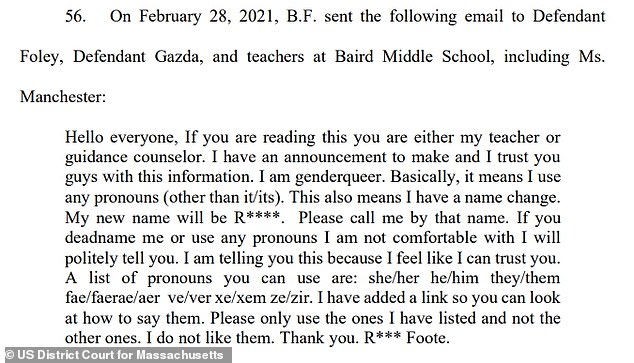 The complaint also states that the parents additionally learned that their other child, a biological boy, had ‘identified as transgender and requested to be called by a female name’, but that the school also did not inform them.

The suit accuses the former district superintendent, Todd Gazda, of insulting the parents during a public School Committee public meeting by claiming their concerns amounted to ‘intolerance of LGBTQ people thinly veiled’ behind a ‘camouflage of parental rights.’

Gazda went on to say that schools, not homes, are the true ‘safe space’ for children because schools supply ‘caring adults’ where students can discuss problems and find support for their ‘true identities,’ according to the suit.

‘For many students school is their only safe place, and that safety evaporates when they leave the confines of our buildings,’ Gazda said, according to the suit.

The lawsuit alleges that the defendants ‘have acted and are acting with reckless disregard for Plaintiffs’ fundamental parental rights by purposefully and intentionally concealing critical information regarding the upbringing and care of their children.’

‘Defendants have violated and are violating Plaintiffs’ fundamental right to make decisions regarding the upbringing, education, custody, care, and control of their children,’ the complaint adds.