Back then the fur trade was a major part of the city's economy, so important that New York put the beaver on its official seal.

The industry is far smaller today, but if you head the city's Fur District, on the west side of Manhattan, you'll still find a cluster of stores selling coats made of mink, chinchilla and lynx. Among them is Marc Kaufman's.

But the city's fur industry now faces an existential threat thanks to a New York City Council proposal to ban the sale of fur clothing. 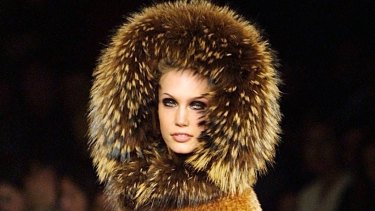 Major fashion labels have been increasingly moving away from fur and now New York’s City Council is considering a ban.Credit:MICHEL EULER

Public hearings on the legislation were held this week, with supporters and opponents holding rallies on the steps of City Hall.

"I think it is ridiculous," Kaufman says.

"The fur business has existed since the beginning of time. Animals were put on this earth to use." 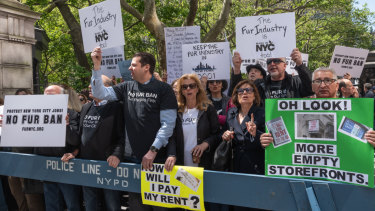 Los Angeles and San Francisco announced fur bans earlier this year, but a New York ban would be far more significant given it is the country's biggest fur retail market.

The city council proposal would ban the sale of fur garments and accessories; those who violate the law would receive fines up to $US1500 ($2185). Shops could still sell second-hand furs and people would be allowed to wear fur garments.

"As an animal lover, I believe it is cruel to kill an animal just for the purpose of people buying and wearing a fur coat," Council Speaker Corey Johnson said in March when he introduced the legislation. 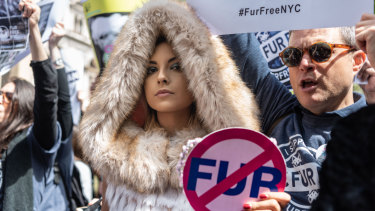 "In a progressive and modern city like New York, banning the sale of fur clothing and accessories is long overdue. Saying no to fur is fashionable and a symbol of progress."

The proposal's supporters include Academy Award-winning actress Angelica Houston, who says she is ashamed that she used to wear pelt garments on the red carpet.

"I used to think they were a symbol of glamour and affluence," Houston wrote in an opinion piece for The New York Daily News.

"This was decades before I learned that these animals are trapped, gassed, drowned and even skinned alive."

It appears New Yorkers agree: a poll commissioned by animal rights groups found that 75 per cent of respondents support a fur ban. (Previous questions in the poll described animals being killed by "strangulation, shooting, drowning, or bludgeoning" which may have increased the number of responses in favour of a ban.)

But the proposal has faced vigorous opposition – and not just from the fur industry, which says a ban would put 1000 jobs at risk in New York.

Leaders in New York's African American community have spoken out against the ban because of the important role fur has played in black culture. Wearing a fur coat – especially at church – has been seen as a symbol of social mobility in a community that has faced entrenched economic disadvantage.

"It was no coincidence that she wore a mink that day. We have worn mink as an equalising factor against racism.

"Fur has given black people standing, fortitude and strength in the face of bigotry, injustice, and intolerance throughout history, and sometimes it was the only wealth anyone ever had as well."

The bill carves out an exemption for fur items worn as a "matter of religious custom" – meaning new shtreimels (distinctive fur hats worn by men in the New York's sizeable Hasidic Jewish community) could still be sold. 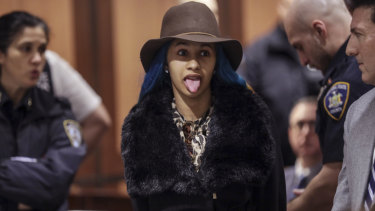 Rapper Cardi B, in fur, in court last year for assault charges during a melee in a strip club.Credit:AP

Some celebrities still wear fur: when rap superstar Cardi B appeared in a New York court earlier this year to face assault charges she wore a floor-length fur coat and hat.

But major fashion labels such as Gucci, Chanel, Tom Ford, Versace and Giorgio Armani have all stopped designing fur products or have announced plans to phase out fur.

Marc Kaufman says this shows government regulation is not necessary. If companies don't want to sell fur, or customers don't want to buy it, they are free to do so.

Kaufman says many older fur workers – who have worked in the industry their entire lives – will be devastated if the ban is approved.

But he is not going anywhere. Much of Kaufman's business is already conducted online and New Yorkers who want to buy a new fur coat will still be able to have one delivered to their doorstep.