A GROUP of migrants took selfies as they dried off on a Kent beach this morning after dumping a stolen dingy.

The five men celebrated crossing the Channel on an inflatable boat after leaping from it and swimming to shore at St Margaret's At Cliffe near Dover in the early hours. 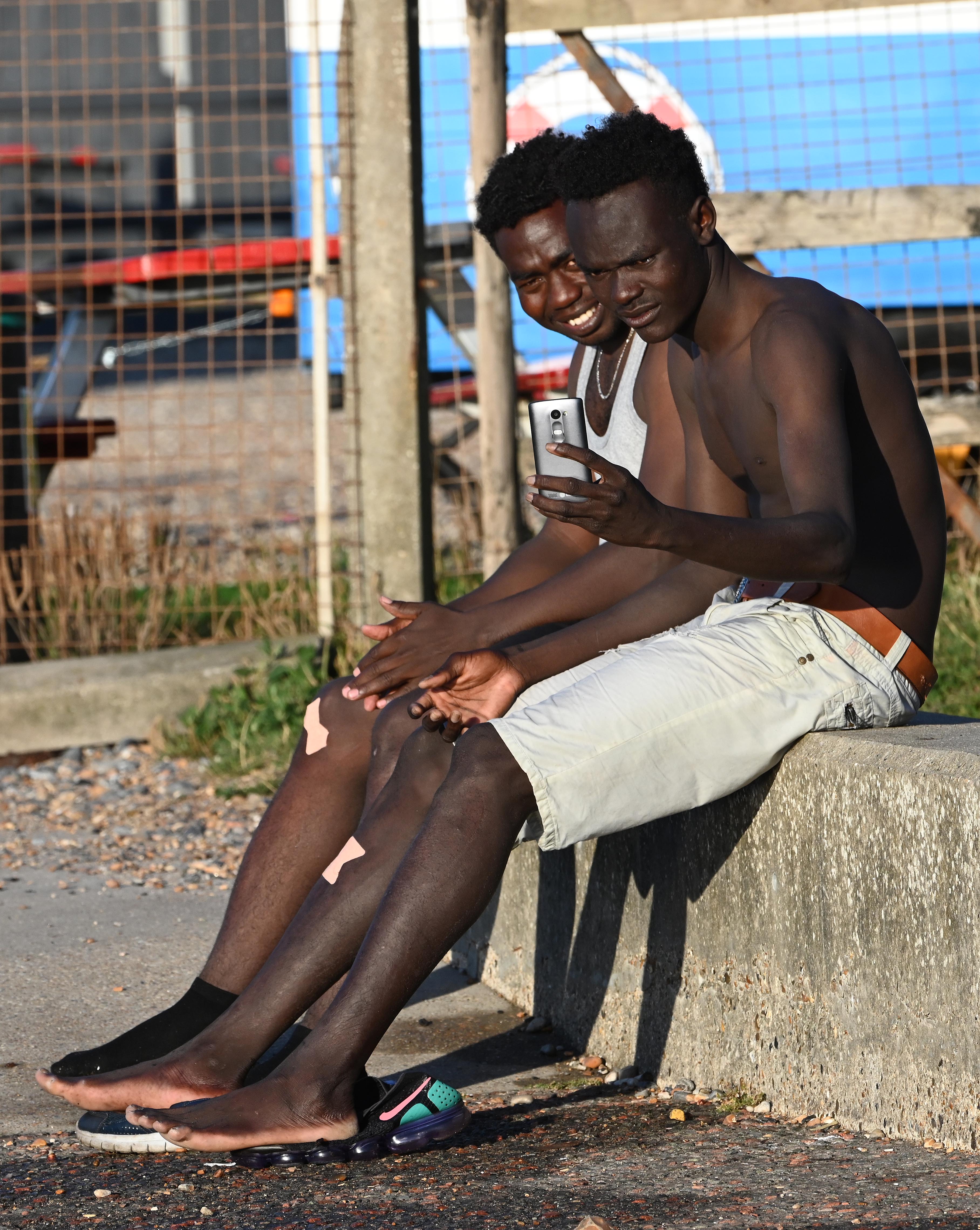 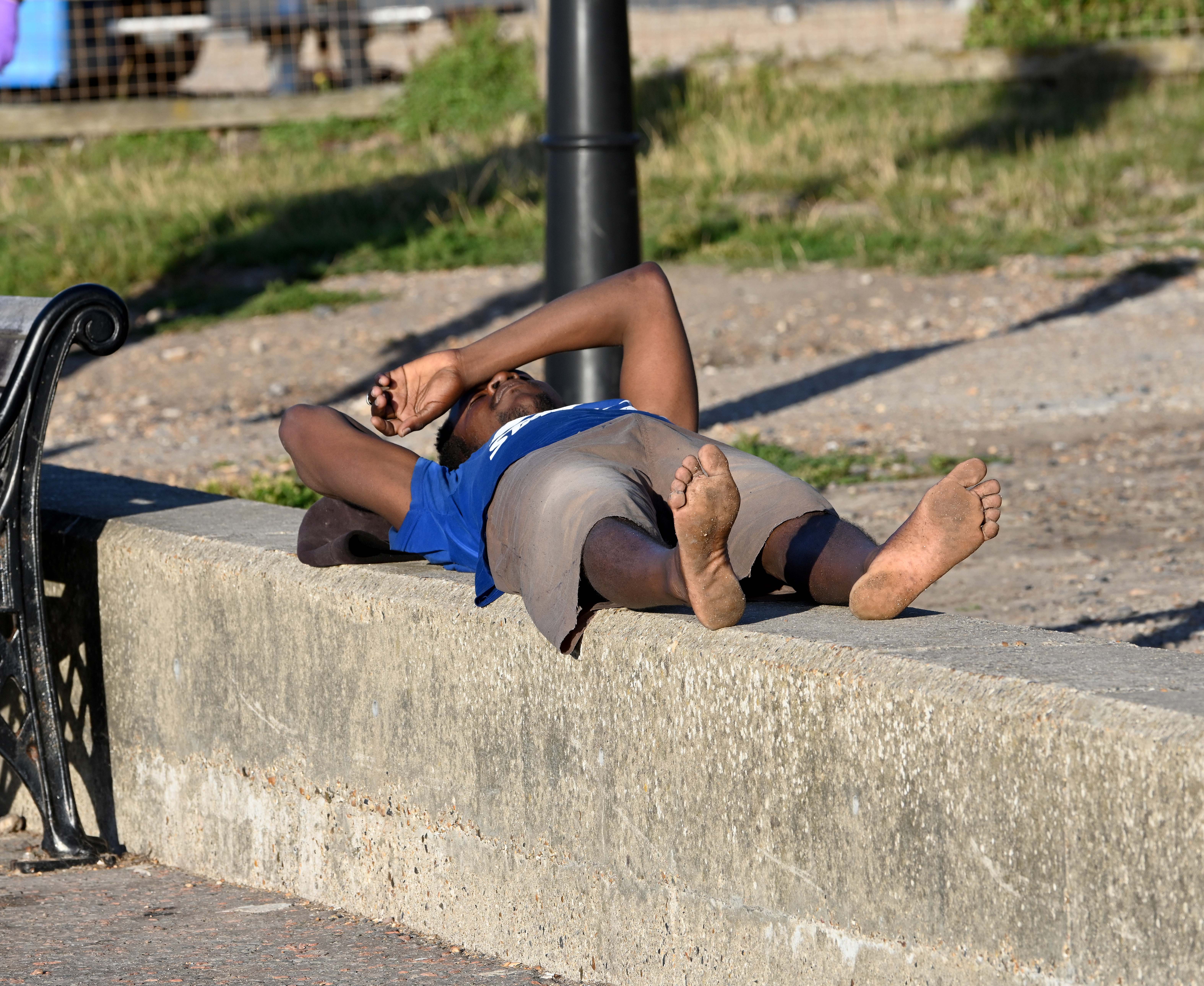 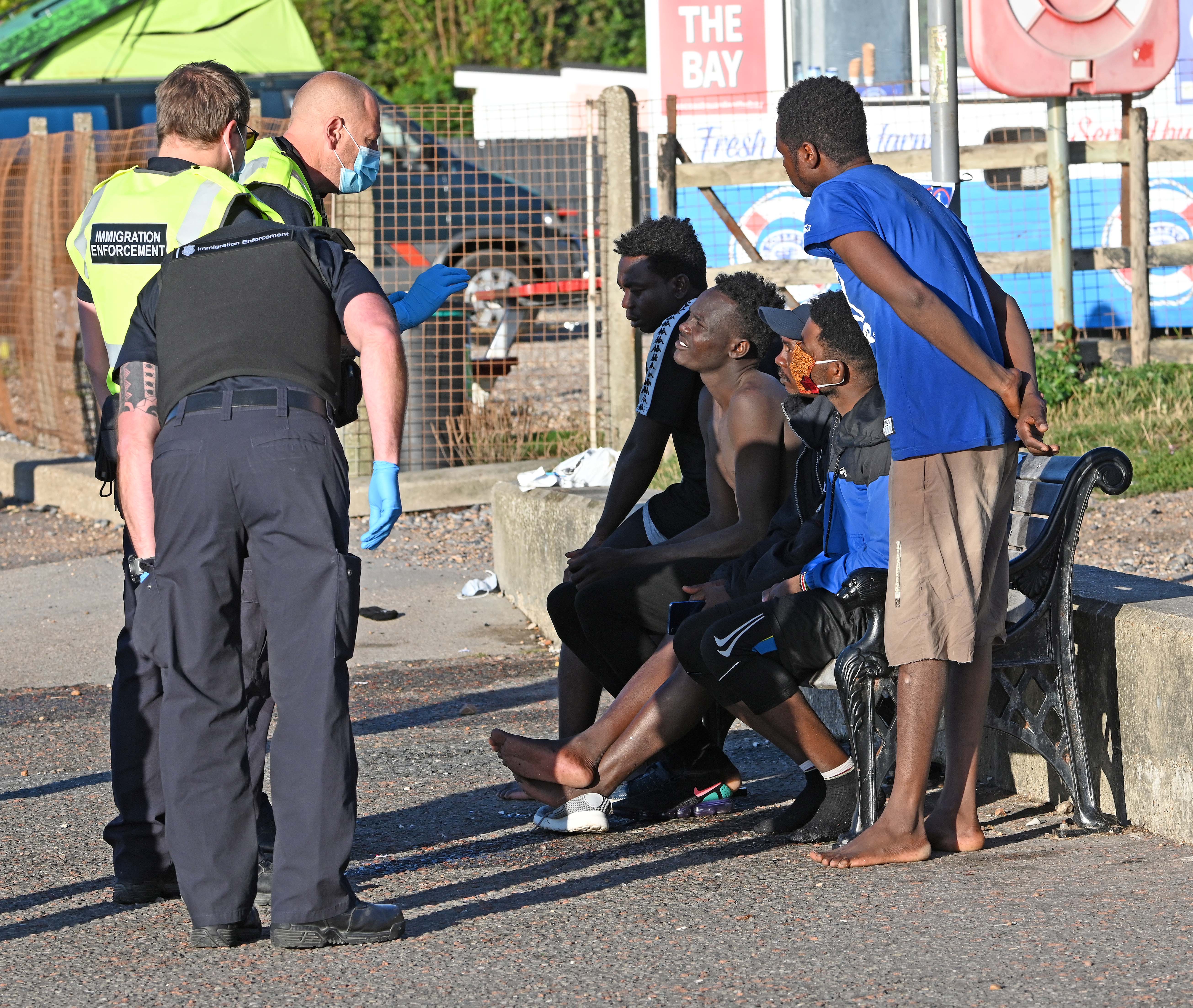 Two of them were seen grinning happily as they held a phone up for a picture, while the others lay down before cops arrived and handed out face masks.

A bystander eventually pulled their boat to shore after they left it in the shallows.

They sat calmly with their clothes hanging to dry on nearby rails as police to turned up, before they were taken to Dover to be processed by immigration officers.

The asylum seekers were said to be "bemused" after they managed to avoid Border Force vessels and reach British land.

The nationality of the group or their ages is not yet known – they were one of 14 boats which arrived on British shores this morning.

Another boat carrying nine people made it to shore at Kingsdown Beach, near Deal, around 9am – and they were found in a nearby churchyard.

While another two vessels – one carrying around 20 people – are believed to have been spotted in the Channel in a busy morning for Border Force officials.

A witness told the MailOnline: "They got near the shoreline, dumped the boat and swam the rest of the way. Police got them straight away, they didn't try to run off, they must have been tired.

"Two of them took selfies before police took the phone taken from them."

A Coastguard spokeswoman said: "HM Coastguard has today coordinated search and rescue responses to multiple incidents off Kent, working with Border Force and other partners.

"HM Coastguard is only concerned with preservation of life, rescuing those in trouble and bringing them safely back to shore, where they will be handed over to the relevant partner emergency services or authorities."

Millions of people fled their home countries in huge numbers in 2015 and came to Europe, sparking a migrant crisis as many attempted dangerous crossings and set up in overcrowded refugee camps.

Each day more people try to cross the Channel from France using smugglers or makeshift vessels – with it feared the current good weather will encourage more attempts.

It comes as than 1,000 refugees have been cleared from settlements in Calais over the past two weeks – the "most intense" since the 2016 jungle clearance – with officers regularly using tear gas.

'ADDING TO THE CHAOS'

So far in July, 777 have made the perilous 21-mile trip across the busy Dover Strait shipping lane – a record for a single month.

Care4Calais says camp evictions have been happening on a daily basis and that 500 were removed from a settlement on July 10 – two days before Home Secretary Priti Patel visited the country.

They were taken to other parts of France by bus, but most have returned to the port city.

Two of them took selfies before police took the phone taken from them.

Police are also said to have cut food and water supplies to those living in camps.

They also say Ms Patel "has no strategy" to protect refugees and control the borders – and that she and her French counterparts are "only adding to the chaos in the Channel".

Care4Calais founder Clare Moseley said a "safe, legal" asylum process is needed, and that it would bring an end to the evil, lucrative trade of people smuggling.

This week we told how hundreds of dinghies used in past attempts to cross the Channel are stored at a high-security government compound.

The Home Office said the boats are kept to use as evidence in smuggling prosecutions. Smugglers charge around £6,000 for a place on a speedboat, £2,500 for a blow-up dinghy or £800 for a kayak.

Lucy Moreton, from the Immigration Services Union, which represents Border Force staff, told The Sun: “Where there is a threat to life, the French will simply escort them into our waters. 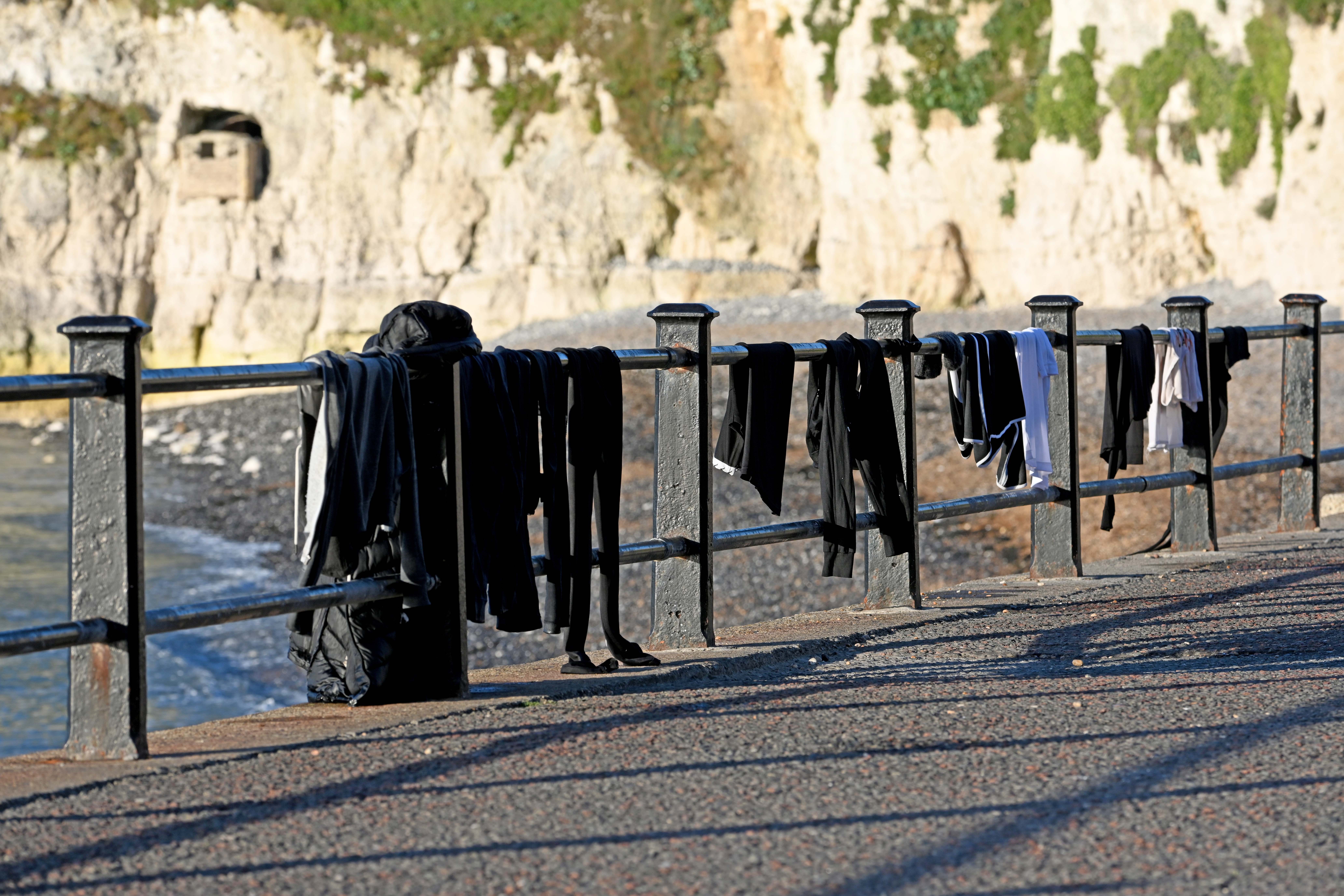 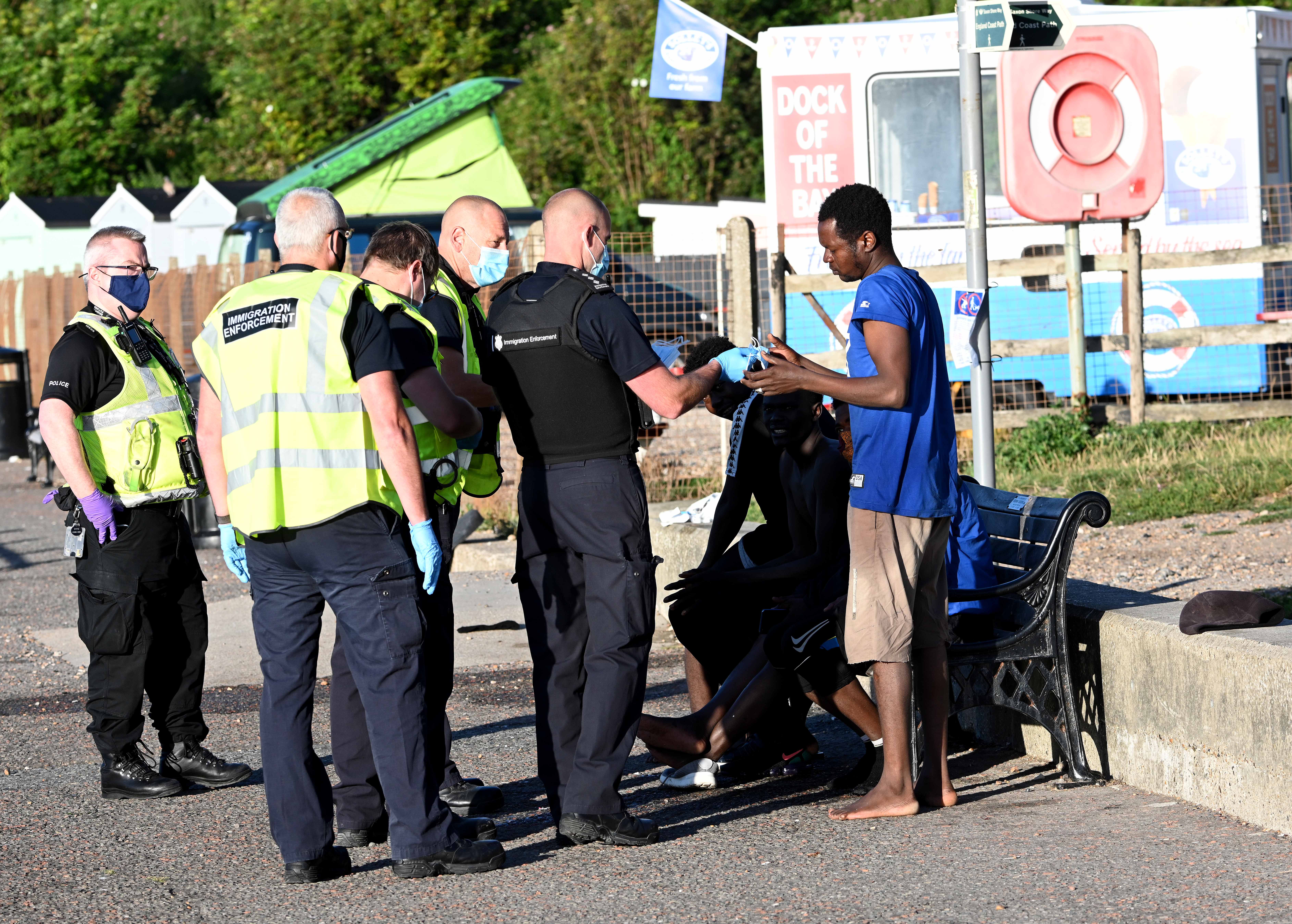 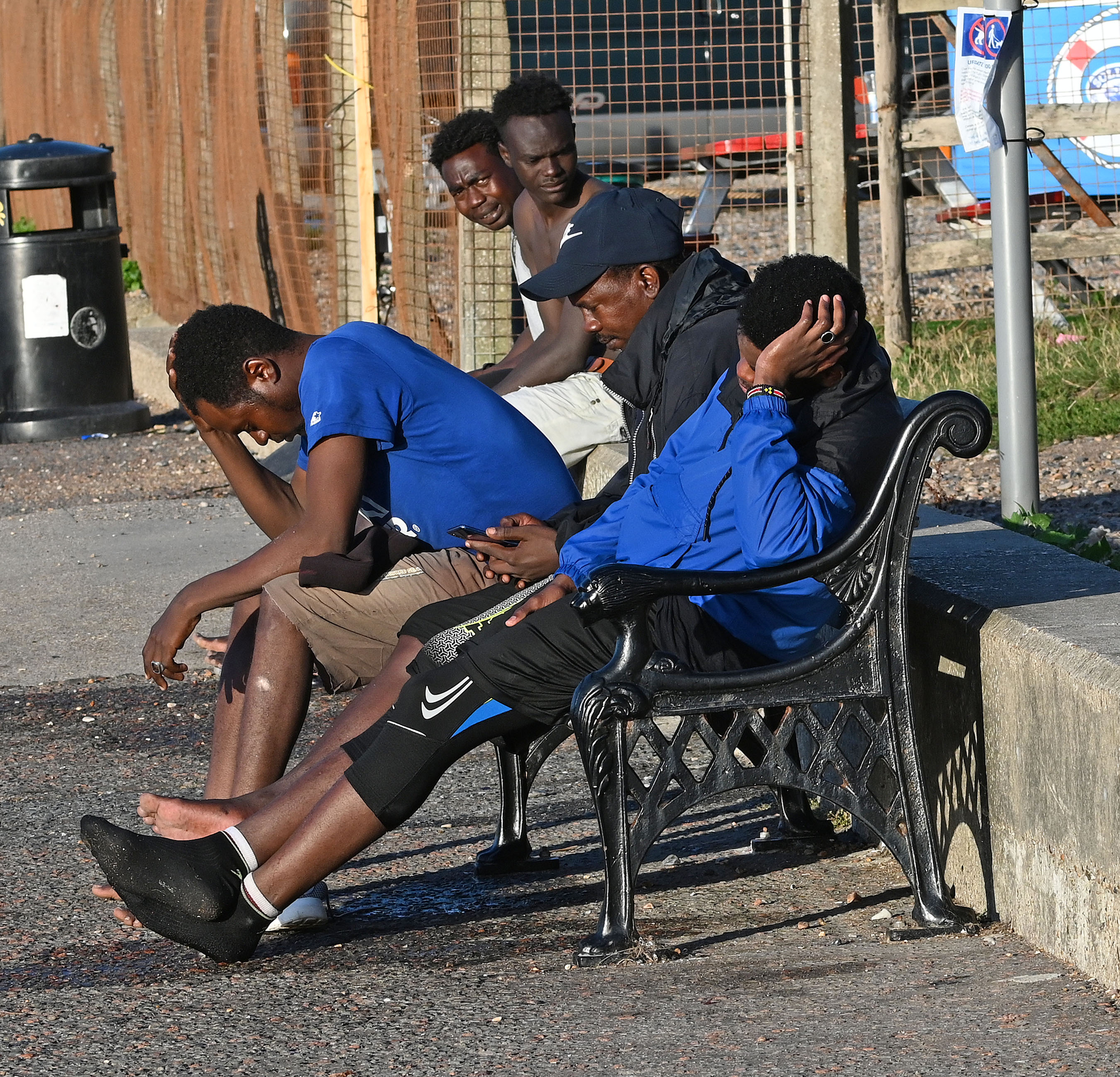