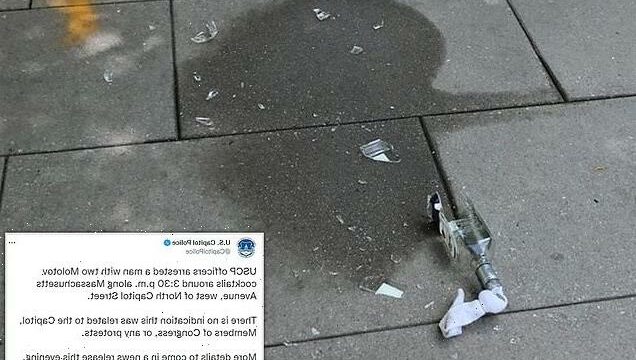 Man, 26, is arrested for trying to light Molotov cocktails and throw them at Capitol cops near Washington DC’s Union Station

A 26-year-old man has been arrested near Union Station in Washington DC after he was found carrying Molotov cocktails, which he attempted to light and throw at Capitol Police.

Bernard L. McCutcheon of Washington DC has been charged with two counts assault on a police officer, one count of possession of a Molotov cocktail, and one count of assault with a deadly weapon.

Police do not believe he was targeting the U.S. Capitol or Members of Congress, and do not think he was involved in any protests. 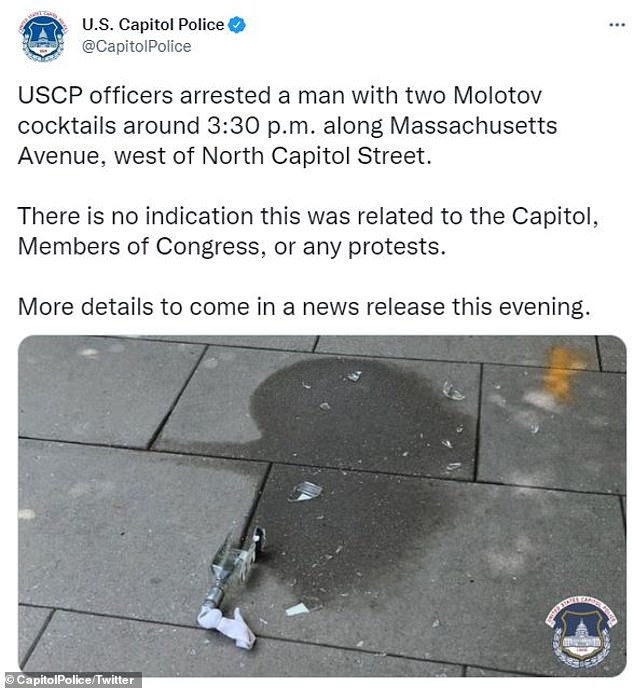 The incident began at 3:30pm, when police received a call about a person with Molotov cocktails.

Capitol Police arrived on the scene, and McCutcheon threw one of the Molotov cocktails at the officers while trying to light it.

McCutcheon dropped a second improvised weapon – made of a tequila bottle, stuffed with a sock, and filled with what police described as ‘a petroleum-based accelerant’.

He tried to run away, but the police arrested him.

A backpack with two other bottles of liquid was also recovered at the scene.

‘Both of our officers were treated for minor injuries. Thankfully they are going to be ok,’ said Sean Gallagher, acting Assistant Chief of Police for Uniformed Operations.

‘We appreciate their quick action that, without a doubt, kept the community safer.’