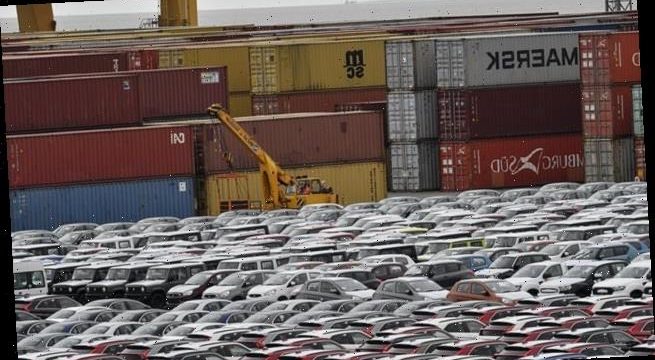 Germany narrowly avoids entering recession with 0.1 per cent growth – but trade wars still threaten many of its industries

Germany has narrowly avoided a recession as the country’s economy grew by 0.1 per cent in the third quarter of 2019.

Berlin admitted its growth numbers were ‘still too weak’ after the figures for July to September were released today.

A recession had been feared after Germany’s economy shrank between April and June, but the second straight decline which would officially start one did not take place. 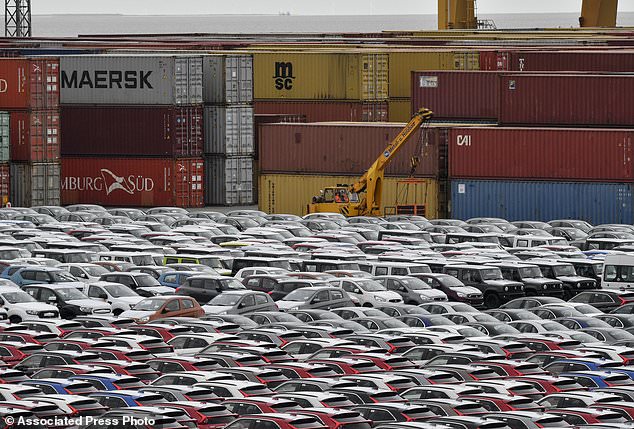 Germany has narrowly avoided a recession as the country’s economy grew by 0.1 per cent in the last quarter (pictured, cars for export at a harbour in Bremerhaven)

‘We do not have a technical recession, but the growth numbers are still too weak,’ Economy Minister Peter Altmaier told ARD television.

Growth of 0.1 percent was ‘a hefty, but happy surprise,’ said analyst Jens-Oliver Niklasch of LBBW bank.

‘In recent months, there were growing hints that other economic sectors were not infected by weakness in industry.’

‘The German economy got away with a black eye: the technical recession could be avoided,’ said analyst Andreas Scheuerle.

The economy is ‘suffering from enormous global political uncertainty’ and the auto industry is not running smoothly anymore, Scheuerle said.

Berlin is still expecting just 0.5 per cent growth this year and last month revised down its projections for 2020 to a 1.0 per cent expansion.

Pointing to revised second-quarter GDP figures, which showed a sharper fall than previously thought at 0.2 per cent, analyst Andrew Kenningham of Capital Economics warned that ‘a recession may have been postponed rather than avoided altogether’.

President Donald Trump has talked up a Washington-Beijing truce in recent weeks, saying on Wednesday that ‘our trade agreement with China is moving along very rapidly’. 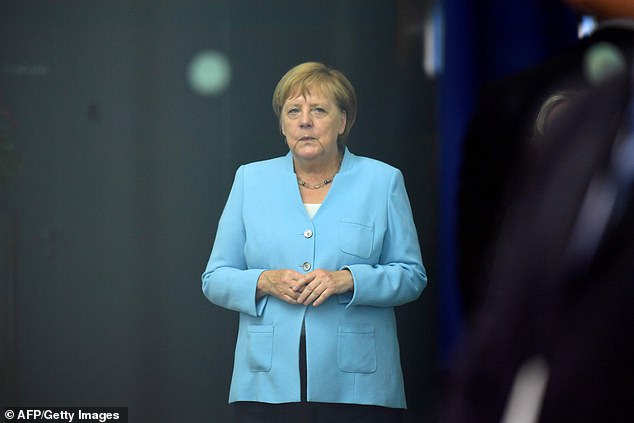 ‘Economic policy uncertainty across the globe has started to come off its August peak,’ while indicators ‘have also started to signal the eurozone downturn could hit the bottom soon,’ said economist Florian Hense of Berenberg bank.

‘While all could still go wrong, less bad political news and stabilising data bode well for the German and eurozone economy in 2020.’

Given the dangers, calls have grown from economists and international institutions for Berlin to grab a policy lever within its control by boosting spending.

A panel of expert economists known as the ‘Wise Men’ earlier this month advised Merkel to loosen the policy ‘in case of a broad, deep recession’.

She said ‘countries with chronic budget surpluses like the Netherlands and Germany’ need to increase spending to redress ‘imbalances’ in the eurozone.

Merkel has so far ignored the growing chorus.

During the G7 summit in August, she said Germany ‘cannot live sustainably beyond our means’ and must be able to finance state pensions for an ageing population.

It is hoped the tax cut could boost household spending and provide a stimulus worth about €10billion (£8.5billion) a year.

However, the tax is a sensitive subject because it was originally introduced to pay for the reconstruction of East Germany after the fall of the Berlin Wall 30 years ago.