As a first-year solicitor, she was refused a job in the Crown solicitor's office because it was deemed that women should not be confronted with the details of nasty crimes. 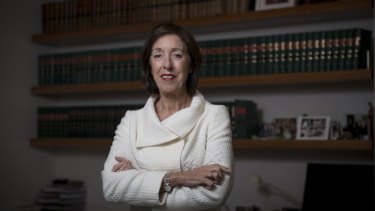 "I am privileged to be appointed," she said. "It is doubtless of significance that I am the first woman appointed to the office. I wish there had been others.

"I will serve the office to the best of my ability."

Long a trailblazer on the hard road to gender equality, Justice Warren will be Victoria's 11th Chief Justice and the first woman to hold an equivalent position anywhere in the country.

Marilyn Louise Warren came from a law school where men outnumbered women nine to one. She did her articles in an office of 10 solicitors, all of them male.

Persevering in the face of an intimidating sea of men in dark suits, she went on to become a senior legal adviser to Labor and Liberal governments, successful barrister and judge.

For the first time, the position was advertised and thrown open to interstate contenders, provoking protests from barristers.

Attorney-General Rob Hulls said Justice Warren was, in the end, the only choice and her intellect, vision and passion promised to herald a new era for the court.

It just so happened, he said, that the best person for the job was a Victorian, a Supreme Court judge and a woman.

Law Institute president Bill O'Shea said the appointment of such a capable and proven judge was a relief. It was a happy coincidence that she was a woman, he said. "With Marilyn Warren we could have a really modern, dynamic court," Mr O'Shea said.

Women Barristers Association convenor Fiona McLeod said: "It is a thrilling announcement and a richly deserved appointment which provides real opportunity for cultural change. "The Attorney-General, Rob Hulls, has seized this opportunity to transform the legal profession this year with the appointment of a number of women judges, the Solicitor-General, Pamela Tate, and Chief Justice Warren."

Australian Women Lawyers president Jennifer Batrouney, SC, said that she was confident that Justice Warren would lead the Victorian Supreme Court with strength, style and grace.

In an address to Victorian Women Lawyers earlier this year, Justice Warren said that women brought a difference to the law. She said they identified an issue quickly, focused on it and persuaded rather than dictated. They brought energy, patience, perspective, humour and insight.

Justice Warren said there was nothing special about what she had done and, to illustrate the point, she recounted a story from her early days at the bar.

She was rushing to get to court when her two-year-old son became ill and vomited on her on the doorstep of the creche. It would, she said, "be no more than another typical story in the hard life of a working woman".

True as that is, Justice Marilyn Warren's achievements have been exceptional.

1998 Appointed a judge of the Supreme Court of Victoria.

2003 First female Chief Justice of the Supreme Court of Victoria.