Paris: France has reported 13,215 new confirmed coronavirus cases over the past 24 hours, a new record since the start of the epidemic, while the daily death toll jumped to a four-month high.

The new cases pushed the cumulative total to 428,696 as the seven-day moving average of daily new infections rose to more than 9300, compared to a low of 272 at the end of May, two weeks after lockdown was lifted. 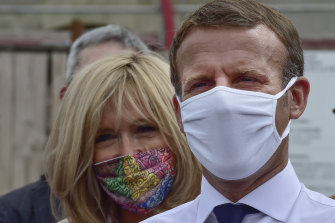 Epidemiologists blame the increase on a combination of faster circulation of the virus and a six-fold increase in testing since the government made it free.

The Health Ministry also reported that the total number of deaths from COVID-19 increased by 154 to 31,249, a four-month high and triple the levels of the past week.

Earlier, the ministry reported the toll increased by 123, but then updated that to 154.

As the infection rate increases daily, the most affected regions and cities in France have tightened regulations.

The city of Nice on the French Riviera will ban gatherings of more than 10 people in public spaces and force bars to close early after Marseille and Bordeaux introduced similar measures on Monday.

The World Health Organisation said more than 170 countries had joined its global plan to distribute vaccines fairly around the world, but cautioned that a race to develop shots could lead to public fears about safety.

Trials of a vaccine in Britain were paused earlier this month following an illness in a participant, while Russia has dismissed criticisms from Western experts warning against early use of its vaccine candidate.

"We already face challenges with vaccine acceptance for many proven vaccines," WHO chief Tedros Adhanom Ghebreyesus said in pre-recorded comments, as he spoke about the push to rapidly develop vaccines.

"We cannot risk having an effective vaccine for COVID-19 that people refuse because of the perception that it is unsafe."

Ahead of a deadline for entry to its COVAX vaccine facility, Tedros said the more than 170 countries who had joined "gaining guaranteed access to the world's largest portfolio of vaccine candidates."

WHO previously said 92 lower-income nations were seeking assistance via the scheme, and some 80 higher-income nations had expressed interest, but some still had to confirm their intention by the deadline.

The WHO and the GAVI vaccine alliance are leading the COVAX scheme, which aims to procure and deliver 2 billion doses of approved vaccines by the end of 2021.

But some countries that have secured their own supplies through bilateral deals, including the United States, have said they will not join COVAX.

"The first vaccine to be approved may not be the best," Tedros added during a webinar hosted by the National University of Singapore. "The more shots on goal we have, the higher the chances of having a very safe, very efficacious vaccine."