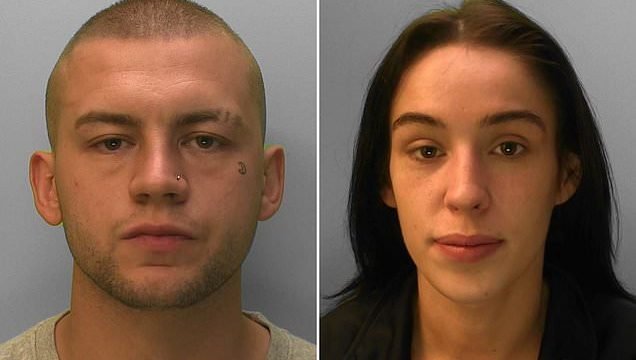 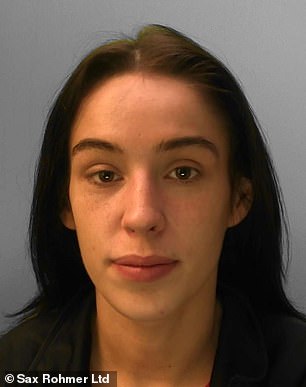 A couple who sprayed ammonia in a teenager’s face grinned and waved at family members as they were jailed for a total of more than 20 years.

Joshua Prout, 19, suffered devastating eye injuries in the attack in Brighton, East Sussex which left him scarred for life.

He was sprayed with ammonia before Jordan Kelly, 28 and Brooke Brennan, 21, told him to hand over his wallet and phone.

A judge told Kelly his history of violence made him a danger to the public before caging him for 12 years with a five year extension.

Her honour judge Christine Laing QC told his accomplice she needed to take her court appearance more seriously before jailing her for three years and four months.

Brennan, 21, barged Mr Prout before Kelly sprayed a liquid into his face – believed to be ammonia.

As his eyes and face burned from the corrosive alkali, the pair robbed him.

He stumbled into the road, narrowly avoiding being run over, and Kelly demanded his phone, bank card and PIN.

After handing over his belongings and the code to unlock the phone, Mr Prout made his way the nearest house and was then flown to hospital in an air ambulance.

Minutes later, Brennan tried to use his bank card to withdraw money at an ATM.

Lewes Crown Court heard the couple have a three year old son together.

The court heard Kelly, who has a history of robbery with violence, pressed something against his victim as he demanded his wallet and phone.

Daniel Stevenson for the Crown said: ‘Kelly brought his left hard round and squirted liquid into his face.

‘He nearly got struck by a car as he ended up in a road.

‘Kelly pressed an object against him, he thought it was a knife.’

Kelly and Brennan, both from Brighton, swapped clothes in an effort to disguise themselves before making unsuccessful attempts to use the bank card.

In a victim statement described by the judge as moving, Mr Prout said every day has been a struggle since the attack.

Mr Stevenson said he has suffered mood swings, has not been able to work and his confidence has been knocked.

‘He is scared of something happening to his remaining good eye,’ Mr Stevenson said.

‘His eye has bled which has scared him.’

The vision in his left eye is severely reduced and he will not recover.

‘This is a very serious injury with a long lasting impact,’ Mr Stevenson said.

Kelly and Brennan looked about them and grinned during the sentencing hearing.

Brennan even smiled at family members in the public gallery as she was taken down.

‘The facts of this case – quite frankly – beggar belief,’ the judge said.

‘It would have been obvious he had no great wealth on him.

‘You robbed him of what he had.’

The bank card was used to pay for goods totalling £11.60 and the pair made three failed attempts to withdraw money.

‘In order to get those relatively minor pickings, you squirted him in the face with a corrosive liquid.

‘For that you were prepared to cause him utterly devastating injury.

‘He has suffered permanent and life changing injury.

The attack on Mr Prout demonstrated a significant escalation in his offending, the judge told Kelly.

‘The casual manner in use of weapon which would cause devastating injury, your willingness to resort to that is of grave concern to me.

‘You are entrenched in criminality,’ the judge said.

She told Kelly: ‘It is a significant aggregating feature you used the ammonia before demanding the items from him.

‘A threat or punch would most likely have achieved your aim.

‘The use of that substance caused far more harm than was needed,’ Judge Laing said.

Jordan Kelly, of Brighton, East Sussex, was jailed for total of 12 years, with a five year licence extension

Brennan carried on with the robbery after seeing the devastating impact of the liquid sprayed into Mr Prout’s face, the judge said.

‘You are only 21 and likely to be somewhat immature with a three year old son,’ the judge told her.

Both pleaded guilty at the first opportunity.

Kelly, who had two previous convictions for robbery and was out on licence when he attacked Mr Prout, was jailed for 12 years with a five year extended licence for the robbery and two further thefts from an off licence and another shop in Brighton.

He will serve at least eight years in prison.

Brennan was jailed for three years and four months.

His extended licence means he could spend 17 years in prison if he commits any further offence when he is released on licence.

Mr Prout was attacked at around 8pm on March 10 this year.

Kelly and Brennan both pleaded guilty in April.

Kelly admitted robbery and throwing a corrosive substance with intent.