Three weeks of sitcom homage, one week catching up with the real world, and now “WandaVision” delivers its first fully formed look at what the series really is: a tragic thriller hidden behind the thin promise of all sitcoms — that everything is going to be OK. Arriving halfway through the nine-episode season, “On a Very Special Episode…” is a pivot point to be sure. Not only does the 33-minute entry (sans those lengthy credits) split time between Wanda (Elizabeth Olsen) and Vision (Paul Bettany) in their new sitcom home, with their rapidly growing kids and short-lived pet dog, but it finally starts setting up the next phase of the MCU and pushes its main character to the tipping point.

How? By introducing her brother, Pietro, aka Quicksilver, who died in “Avengers: Age of Ultron.” Except this Pietro isn’t the same one Wanda is familiar with; as Darcy (Kat Dennings) says while watching it all unfold on TV (just like we do!), Quicksilver has been “recast.” It’s Evan Peters, last seen playing the gray-haired speedster in “X-Men: Dark Phoenix,” which presumably means the mutants have finally arrived in the MCU.

That’s a lot to process, and I’ll leave the bulk of it to my Easter Egg-spotting colleagues to sort through properly, but Episode 5 succeeds via an all-out informatory assault. There’s the eerie opening titles that pay homage to “Family Ties,” a title that even taken on its face ties in to the familial twist at episode’s end. There’s photos of baby and teen versions of Wanda and Vision. There are sweet little callbacks, like Jimmy (Randall Park) bringing Darcy her long-awaited coffee, and major moments of clarity, like when we see security footage of Wanda stealing Vision’s corpse in order to reanimate it to her liking.

These are the puzzle pieces MCU fans have been waiting (rather impatiently) to see click into place, and while rewarding their fan theories does a good episode make, Episode 5’s focus on Wanda is what makes the jam-packed plotting connect. And it’s also what makes Episode 6 worth getting excited about.

At first, it seems like “On a Very Special Episode…” is all but doing away with its sitcom set-up. Only a few minutes pass before Auntie Agnes (Kathryn Hahn) is asking if she should “take it from the top,” after Vision rebukes his wife’s wishes for a babysitter. From there, Vision’s world continues to crack; he can’t understand why Wanda is so cavalier with her powers around Agnes, and he forces his coworker Norm (Asif Ali) to break character and tell him how he’s really feeling. Vision’s discoveries range from troubling to downright monstrous, all of which build to a heated confrontation at home, where he refuses to let the credits roll on their argument and instead takes to the air for a throwdown with his secretive wife.

“I can’t remember my life before Westview,” he shouts. “I don’t know who I am! I’m scared!”

Wanda tries to calm him down, but it’s clear Vision’s disquieted state stems from his request long ago, before he died, when he made Wanda promise to let him rest in peace. Now, not only does he know something is wrong with their world, he knows something is wrong with him. That kind of personal discomfort, that kind of nagging doubt in one’s own identity, it’s shattering, and Bettany conveys it with apt anguish. It’s the first time we’ve been allowed to really connect with the character, and while it’s arriving a bit late, the moment is nonetheless powerful.

Meanwhile, Wanda’s moment is coming. Episode 5 sets up quite a challenge, and it does so under the guise of a meaningless sitcom story. Wanda’s arc this week is all about rules. Since Episode 3, she’s been going along with inexplicable events (like her speedy pregnancy), but more recently she’s been asking others to go along with them, too. This week, she creates a dog collar out of thin air, right in front of Agnes. Vision protests, but she rationalizes her decision by saying Agnes already saw them age up (which, I must say, is one of the creepiest things I’ve ever witnessed).

Later, that rationalization gets her in trouble when Sparky dies. Billy and Tommy beg their mom to revive their day-old pet. “You can fix anything, Mom,” they say. “Fix dead.” Horrific dialogue aside, the confrontation forces Wanda to explain why rules matter — not just to her kids, but to herself.

“I’m trying to tell you there are rules in life. We can’t rush aging just because it’s convenient,” she says, when the kids want to grow older to avoid the pain they feel right then. “And we can’t reverse death no matter how sad it makes us. Some things are forever.” 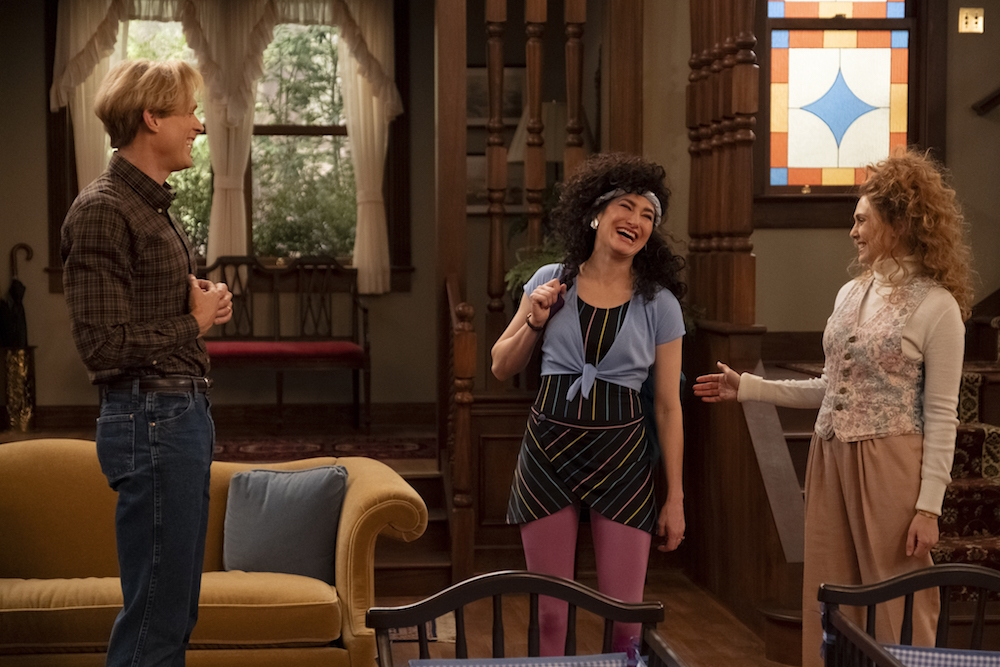 As Olsen delivers the line (rather beautifully, I must say), her revival of Vision is first and foremost in the audience’s mind. How can she say “some things are forever” when she refuses to accept Vision’s death? Does she justify it because he wasn’t technically “alive”? Because he wasn’t ever human? If so, what does that mean for their relationship, their marriage, and for how she thinks of him in general? Vision is her husband, and if he’s not a living, breathing human, then he’s still sentient enough to pick up on her treatment of him as less than other humans.

But now she has to make that choice again, without any excuses. Pietro is back. Her brother is alive. He’s entered her Westview, NJ bubble, and she knows he’s dead. Can she really just pretend he’s part of the “show,” part of their lives, like everyone else? How, exactly, Quicksilver ended up there may help ease her moral quandary. If we believe Wanda, then he’s not a random citizen playing a part (meaning, as she told Vision, she didn’t have him knock on the door in order to interrupt their conversation). He could still be a “random” person in disguise, cloaked by an evil force yet to be revealed, but another option seems more likely. If he’s been ported in from the multiverse by Mephisto — the long-rumored Big Bad of “WandaVision,” who’s expected to introduce the upcoming “Multiverse of Madness,” which, in turn, is supposed to bring in actors and characters from previous, non-MCU Marvel movies — that means this Quicksilver is a real person and a real version of her brother, which would provoke Wanda to confront issues she’s kept at bay thus far.

Can Wanda give up control and confront her pain? Will she be able to set her powers aside and deal with the reality in front of her? Will she even be able to properly recognize reality after manipulating it for so long? “WandaVision” continues to keep answers at arm’s length, but at least it’s finally prompting the right questions.