Jeremy Allen White isn’t a real high-end sandwich chef, he just plays one on TV. He also doesn’t live in Chicago; again, that’s just been the setting for most of his television career, from Showtime’s “Shameless” to FX’s “The Bear” on Hulu.

Still, White has spend ample time professionally in the Windy City and considers it “a third home” (in addition to New York City and Los Angeles) so we put a mitraillette to his head and made him name his favorite Chicago sandwich joint.

“People are gonna make fun of me,” he warned IndieWire. Try us.

“We didn’t shoot ‘Shameless’ really in Chicago — we shot it in Los Angeles mostly — but we would go kind of like two weeks a season,” White said. “And there was a Portillo’s, which is like a chain in Chicago, but their Italian beef was very good. It was kind of like my introduction to Italian beef. Also their sausages; they have a really amazing chocolate cake. But it’s like a blue-chip sandwich spot, so I dunno if I’m gonna get like dragged for picking it. But it was my first, so I’d have to say I’ll always have a soft spot for Portillo’s.”

Portillo’s tags itself as “Unrivaled Chicago Street Food Since 1963.” These days, there are more than 70 locations across several states (though the vast majority remain in Illinois). Oh, and don’t drag White — just look at this mouth-watering menu.

You know what’s also pretty tasty? The catering on the set of “The Bear,” the show which was created by Christopher Stoner and stars White, Ebon Moss-Bachrach, and Ayo Edebiri.

White said the craft services catering on the soundstage (only the pilot was filmed in a real restaurant) is “really, really wonderful.” The Season 1 cast and crew also picked on some of the food they cooked on camera, which White said “usually was very good.”

But that legit delectability has caused continuation problems when he, Edebiri, and others took a few too many bites of the in-scene stuff. Enter Canadian chef Matty Matheson, the show’s food consultant, co-producer and a recurring guest actor who plays the sort-of honorary Original Beef of Chicagoland handyman Neil Fak. A pretty good guy to have on set, the former executive chef of Parts & Labour and a social-media star who has appeared on and hosted several Vice and Viceland shows would whip up new prop/real food faster than you can scramble an egg. 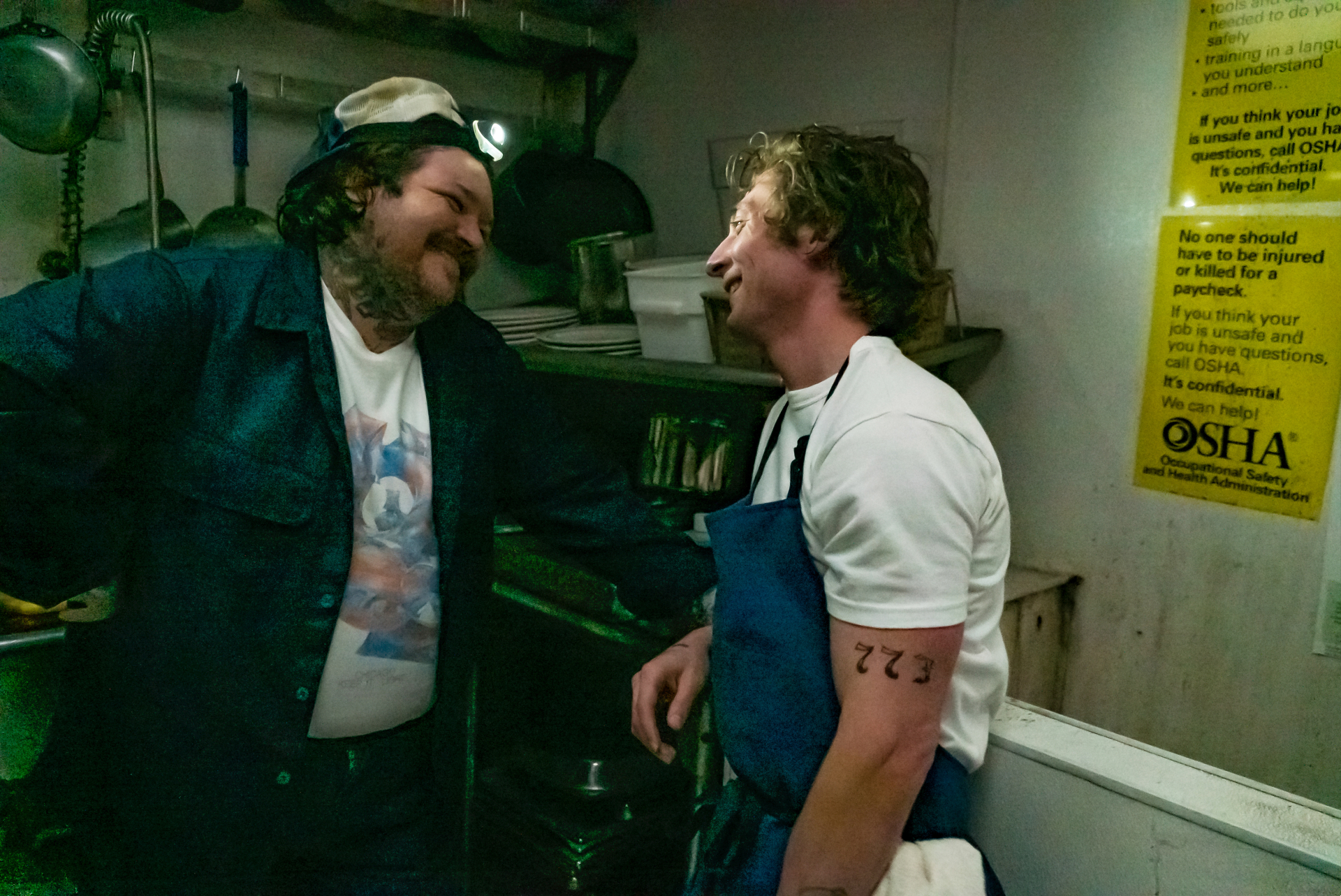 Matty Matheson and Jeremy Allen White on FX’s “The Bear” on Hulu.

Just as speedy was “The Bear’s” atypical rollout. The Stoner series dropped all eight of its episodes at once on June 23, 2022 on Hulu, an unusual (but growing) strategy for the streaming service — and that goes double for its FX-branded shows. (“Pistol” in May became the first FX series exclusive to Hulu to drop all episodes at once.)

“Because they dropped it all at the same time…for some reason it seems to have taken people by surprise a little bit,” White said of his series’ reception. He’s observed the same “snowball effect” of adulation that we’ve witnessed on Twitter, calling the response “fast and furious” and “gratifying.”

“We knew that we did something really good. The feeling on set was always strong. But then when you put something out there, you just never know,” he said. “You could be thinking you’re making the greatest thing and it just doesn’t touch upon whatever is going on in the zeitgeist and it doesn’t catch.”

That is especially when bingeing can shrink a show’s window of viability. “It’s a gamble,” White said of the all-at-once premiere. “You’re really hoping people connect with it really quickly, otherwise they might turn it off and they won’t check in again.”

Fortunately, the frantic pace of the show lends itself to how we prefer to consume series in 2022. “[Producers] wanted to really land audiences in this world, not give them too much exposition,” White said. “Not let them even catch up. Like, the pilot is so fast.”

Let’s get to the real meat from the fake Original Beef of Chicagoland. IndieWire is here to tell you that, yes, White, Stoner, Moss-Bachrach, Edebiri, Matheson, et al. do still call each other “chef” on set before and after the cameras are rolling.

“The Bear” is available on Hulu.