Kate Garraway, 54, was on hand to host Good Morning Britain with Adil Ray, 47, and the presenters spoke about a number of topics. One of the discussions was about Labour winning the Batley and Spen seat as Kim Leadbeater became the new MP for the constituency. The ITV news show welcomed the Labour Party National Campaign Coordinator Shabana Mahmood, 40, to the programme to give a reflection on securing the seat. However, as the host probed her a little more about why the opposition had won, they ended up clashing as the presenter claimed her guest “hadn’t answered” her question.

Garraway put to Ms Mahmood as she made reference to the reports about the government: “Did Labour win this or did Matt Hancock lose it for the Conservatives?”

The politician replied: “This was a Labour win in Batley and Spen and I’m very clear this is a win for Kim Leadbeater and the whole campaign team.

“They ran a positive campaign focused on the issues that matter to the people of Batley and Spen and anybody who spent time in that by-election campaign will have seen that positivity shine through.

“And in the end, that is what Batley and Spen chose,” she added before the presenter interjected and spoke over the top of her.

“Sorry to interrupt you, but you didn’t really answer the question,” the host remarked as the clash erupted on-screen. 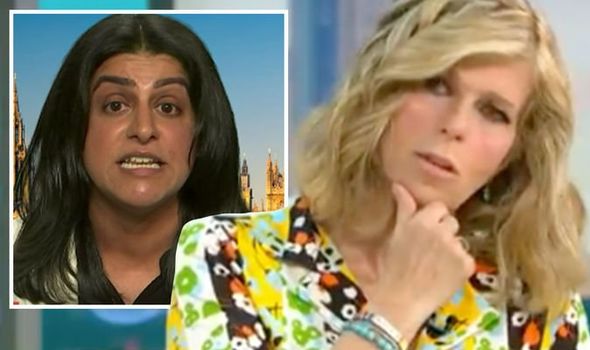 “And also, you went back to the campaign,” Garraway declared and within seconds, the politician was hitting back.

“You asked if we won and I said we did,” Ms Mahmood replied as the host said: “Well, [say this to] you, then.

“You’re talking very passionately about the effectiveness Kim Leadbeater had when she was there in the community.

“People talk very passionately about how Keir Starmer when he meets people, cuts through and yet it doesn’t appear from the outside to those who haven’t directly met them as though that message is getting across in the wider community.”

You didn’t really answer the question

The host asked: “What can Labour do because people are saying, already, Keir Starmer had a near-miss here?

“People were circling to remove him as a leader if this hadn’t gone 322 votes to Labour. How broadly speaking can Labout cut through better?”

Ms Mahmood explained: “I’ve got no trouble with people engaging in speculation whatsoever and we are very clear, Keir himself was very clear about the scale of the challenge that we face.

“That 2019 General Election result was a truly terrible result for us and in order to win the next General Election, we need to pull off something we didn’t even achieve in 1997.”

“We need a bigger swing than what we achieved in 1997 and Keir has said we always had a mountain to climb,” the politician continued.

“What we’ve seen in the local elections and since then, that whilst we are making progress in other parts of the country, we still have work to do.

“That is the nature of an opposition coming from a disastrous result such as that what we had in 2019. We are making progress.

“I’m clear, we’ve got to learn lessons from the areas in which we have made progress and also learn the lessons in defeat.”

Taking to Twitter, viewers shared their thoughts on the result of the by-election, with one Labour supporter writing: “We won! Don’t talk it down celebrate the fact that we are on the way up.”

Another posted: “Labour should think like retailers. Present the shop the bring customers in, have stock people want to buy, and staff with great customer service. In terms of image, policy and people … Labour is a near-bankrupt shop.”

Whilst a third commented: “Labour still have another General Election to lose thanks to Corbyn alienating lifelong voters. Be 2028ish by the time they’re in power.”

A fourth remarked: “They’ve had the seat since 1997. Barely making progress.”