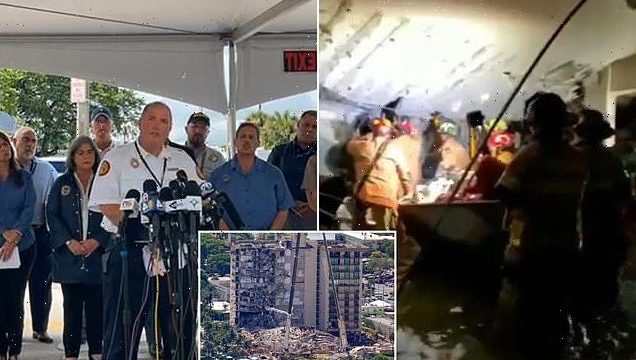 ‘Honey, we got you. We’re going to get to you’: Miami rescuers heard a woman trapped in the rubble screaming for help who they desperately tried to reach – but her cries eventually went silent before they could save her

Rescue workers could hear a woman trapped in the rubble of the Miami condo collapse shouting for help – but after hours of trying to reach her, they no longer heard her screams.

Miami Dade Fire Chief Alan Cominsky told reporters at a news conference Thursday morning that early in the rescue effort, crews had been trying to get to the woman who they could hear, but could not reach.

‘We did hear audible sounds,’ he said. ‘They were searching for a female voice, is what we heard, for several hours – and eventually we didn’t hear her voice anymore.’

The revelation came as Florida officials said they were halting rescue operations out of fear they could cause further collapse, one week after a portion of the 12-story Champlain Towers South fell, killing 18 people and leaving another 145 so far unaccounted for. 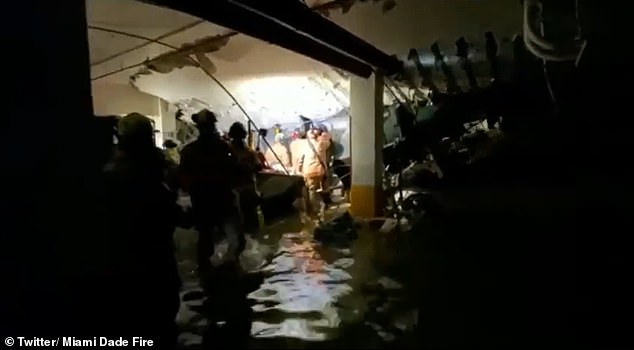 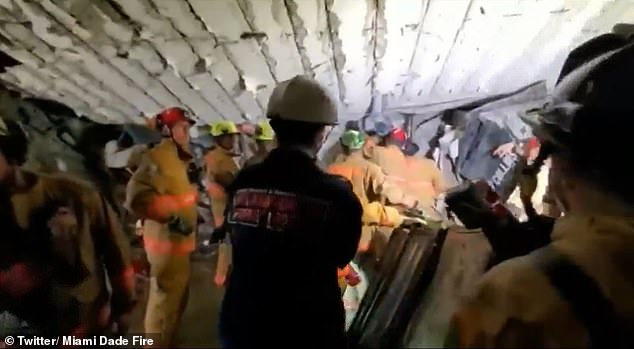 In addition to the concrete, a dumpster and a tangle of rebar was in their way. They would be unsuccessful after a fire drove the crews back

‘That’s just emphasizing the magnitude of what we’re going through, you know, the efforts that all our fire rescue personnel, everyone that’s here on scene trying to do the best we can in these heroic efforts, and, yes, unfortunately we didn’t have success with that,’ Cominsky said.

It was about 10 hours after the collapse when rescue workers said they heard the woman crying out for help.

‘The first thing I remember is thumping on the wall and then I remember her just talking, ‘I’m here, get me out. Get me out!” one of the rescue workers told WPLG.

‘Everybody that was there, that’s what we’re trying to do, get this lady out and comfort her. … She was asking for help and she was pleading to be taken out of there,’ he recalled. 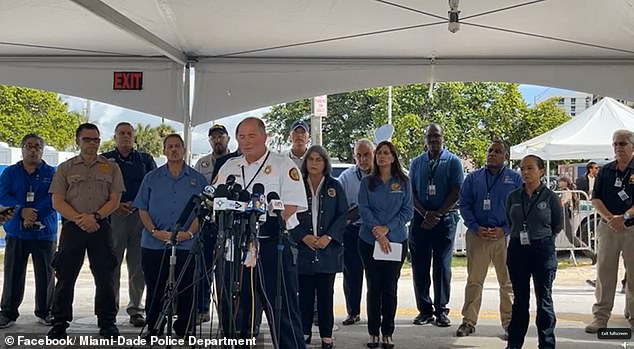 Fire officials confirmed reports of rescuers hearing the trapped woman on Thursday, with Miami Dade Fire Chief  Alan Cominsky saying she had not made it. ‘We couldn’t hear her voice anymore,’ he said

‘We were continuously talking to her. … ‘Honey, we got you. We’re going to get to you.”

Video from the scene, however, showed what was in their way.

The woman was trapped in the lower level of the building behind a wall of concrete, a dumpster and a tangle of rebar, and the rescuer said he was never able to make visual contact with her.

After a desperate effort, the rescuers were were pushed back when a fire broke out, according to an email from a crew supervisor obtained by the television station.

After that, ‘We know she passed,’ the supervisor wrote. 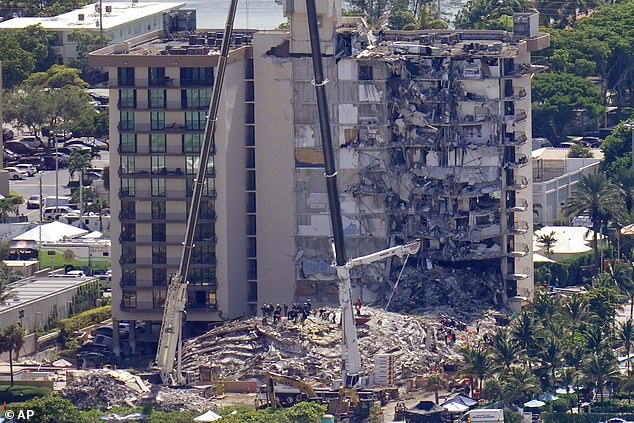 Reports of the failed rescue effort come one week after a part of the 12-story fell, killing 18 people and leaving another 145 so far unaccounted for. 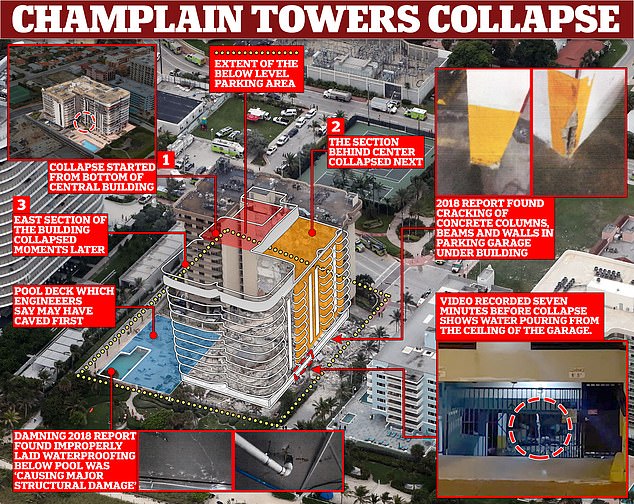 The supervisor also said the woman told rescuers that she was trapped alongside her elderly parents.

He was concerned at the psychological effect the failed effort might have on the crews, noting that, after, chiefs on the scene said, ‘They saw the wind knocked out of our guys…’

Miami-Dade Lt. Obed Frometa, who works as a chaplain to help his colleagues cope with the trauma told WPLG that such setbacks be a major blow to the morale of the rescue workers, and bring ‘a feeling of not only defeat, but it’s a feeling of loss. We are human, after all. We’re not robots. We’re not machines. We feel it.’

President Joe Biden met with fire and rescue personnel in Florida Thursday who are engaged in the wrenching and laborious task of contending with the devastating building collapse and its aftermath, telling the responders ‘What you’re doing is incredible.’

Biden scheduled a meeting with dozens of first responders soon after arriving at a hotel blocks from the disaster seen of the Champlain Tower collapse.

Biden met the responders, who wore Miami-Dade Fire and Rescue jackets, FEMA patches, and police uniforms, at the St. Regis hotel in Bar Harbour, where he is devoting a day to meeting with families, public officials, and responders. 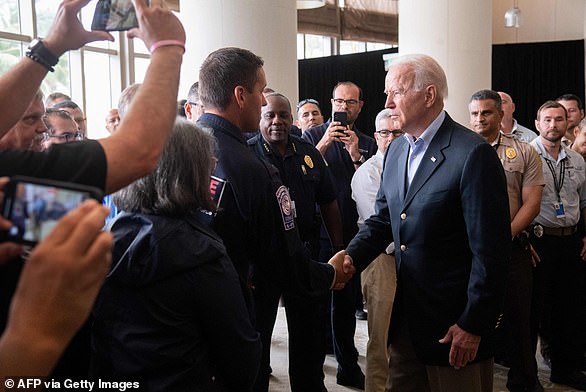 At one point, he recounted how first responders used ‘jaws of life’ to pry his children out of the vehicle during the 1972 car crash that took his first wife, Neilia, as well as his infant daughter, Naomi.

He urged them to ‘be careful’ in the work, amid concerns that shifting or instability in the rubble could pose a risk. Work was suspended after about 2 am amid the safety concerns.

‘I promise you: I know. What you’re doing here is incredible,’ he told them.

The event was a photo ‘spray,’ and reporters weren’t invited to stay for long. Other notables, including Florida Gov. Ron DeSantis and Sen. Marco Rubio, arrived shortly after it began, with an apology from staff.

His visit came on a day when work was being suspended indefinitely due to safety issues. 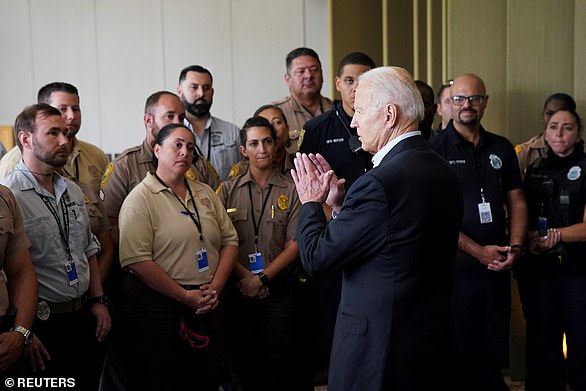 Earlier, Biden told DeSantis ‘we’re here to help’ shortly before he met with rescue crews looking for the 145 people still missing in the rubble of the collapsed Miami condo and spoke to officials leading the recovery.

He spoke to the ‘a lot of pain and anxiety, suffering’ of families awaiting the final word on their relatives as search efforts were halted over fears the rest of the structure could fall on first responders.

‘We’re not going anywhere,’ Biden promised, as he spoke of the federal response, which includes dispatching FEMA and a promise of federal aide. ‘For real,’ he added, for emphasis.

‘Tell me what you need?’ he told officials who gathered in the St. Regis hotel blocks away from the site. 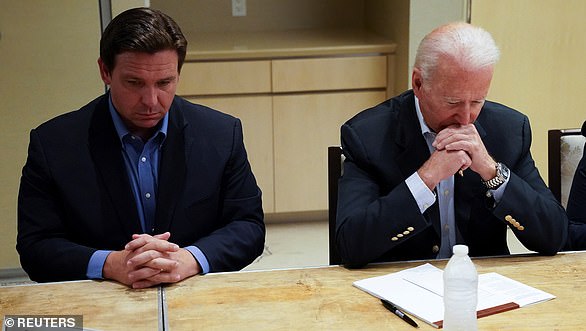 President Biden meets with Republican Florida Gov. Ron DeSantis at a briefing at the collapse of the Miami condo

Biden was seated next to DeSantis, as well as Daniella Levine Cava, the mayor of Miami-Dade County. He was seated across from two Republican rivals, Sen. Rick Scott and Marco Rubio of Florida, Scott sporting the same familiar Navy cap he wore on disaster visits with former President Donald Trump.

‘You know what’s good about this?’ Biden said: ‘It lets the nation know we can cooperate…that’s really important.’

‘We’re here to help,’ Biden told officials. He also told DeSantis, ‘This is your show.’ DeSantis also paid Biden a compliment. ‘We’ve had no bureaucracy,’ DeSantis told him.

‘You recognized the severity of this tragedy from day one, and you’ve been very supportive,’ DeSantis told the president. 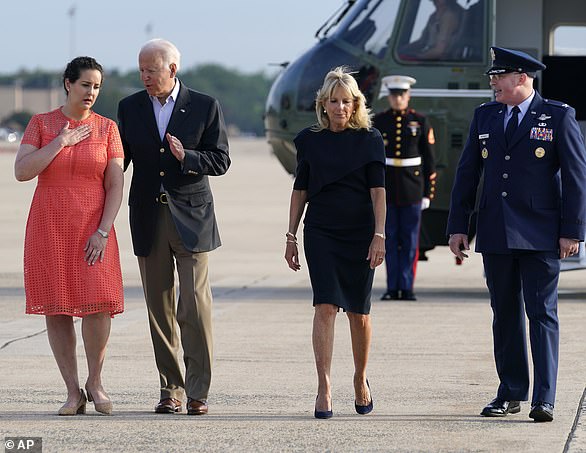 President Joe Biden and First Lady Jill Biden depart from Joint Base Andrews en route to Miami, Florida, to visit the site of the collapsed condo where 18 have died and 145 are still missing. They were joined by Col. William McDonald, 89th Airlift Wing Vice Commander, and his wife Diana

‘It’s been an incredible collaboration from the beginning,’ said Cava as the officials traded compliments while the cameras rolled.

‘There’s an amazing story, and lives have been shattered irrevocably as a result of this,’ DeSantis said at the meeting when it was his turn to speak.  ‘We’ve already identified unfortunately fatalities, people who’ve been 92 years old and the matriarch of a wonderful family. We have families with kids missing. And we even have young newlyweds, who hadn’t even been married a year that were in the tower when it collapsed.’

‘The cooperation has been, it’s been great, the local and both the municipal and the county have been fantastic,’ he said. ‘And you guys have not only been supportive at the federal level, but we’ve had no bureaucracy,’ he said. He said FEMA approvals were happening ‘in no time.’