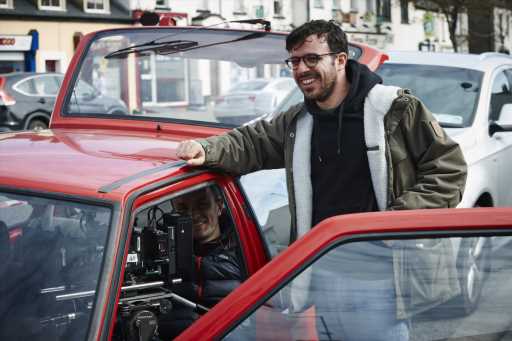 For the third year, the UK’s three leading financiers, the BFI, BBC Films and Film4, in collaboration with the British Council and the UK government’s ‘Great’ campaign, will be showcasing up-and-coming UK talent in Cannes via the ‘Great 8’ program. Scroll down for the lineup.

Highlighted on Tuesday 14 May during a private reception at the Hotel Gray d’Albion, the event will reveal unseen footage from eight UK projects in post-production. These are relatively low-budget UK movies in the Cannes marché with breakout festival, commercial or critical potential. Guests will comprise international buyers and festival programmers.

Movies selected in recent years include Michaela Coel musical Been So Long, which was nabbed by Netflix in a multi-million dollar deal soon after the festival, Michael Pearce drama Beast, which went on to play at festivals including Toronto, London and Sundance, and Brian Welsh’s Beats.

Synopsis – In darkest rural Ireland, ex-boxer Arm has become the feared enforcer for the drug-dealing Devers family, whilst also trying to be a good father to his autistic five-year-old son Jack. Torn between these two families, Arm’s loyalties are truly tested when he is asked to kill for the first time.

DAYS OF THE BAGNOLD SUMMER

Synopsis: Sue works in a library. Daniel eats crisps and listens to Metallica. This was the summer Daniel was due to spend with his father and his father’s new wife in Florida. But when they cancel his trip at the last minute, Sue and Daniel suddenly face the prospect of six long weeks together. An epic war of wills ensues in the unassuming battleground of their suburban home as they each reckon with private tragedies – and pursue their personal passions.

Synopsis – Lynn and Lucy are lifelong best friends, their relationship as intense as any romance. Neither has ventured far from where they grew up. Lynn, who married her first boyfriend and whose daughter is fast growing up, is delighted when the charismatic, volatile Lucy has her first baby boy. Lucy, however, does not react to being a mother as Lynn expects. Soon, they find their friendship is tested in extreme circumstances.

Synopsis – When Ruth moves in with her boyfriend in a remote holiday park, she makes an unsettling discovery that ushers a sense of unease into their caravan and lures her into a spiral of obsession.

Synopsis – Kit, a British Vietnamese man, returns to his birth country for the first time in over 30 years in search of a place to scatter his parents’ ashes.  He was just eight years old when he and his family escaped Saigon as ‘boat refugees’ during the Vietnam-American war.  No longer able to speak his native language, Kit embarks on a journey from Saigon to Hanoi.  Along the way he meets his estranged second cousin Lee, and befriends Lewis, an African-American whose father had fought in the same war that displaced Kit, and Linh, a young Vietnamese woman from a new generation that no longer wants to dwell on the past and yet is shackled by its traditions.

Synopsis – 15 year old Leigh is a gymnast focused on her first competition on the squad. Leigh’s life is turned upside down when her older half-brother Joe she didn’t know existed, comes to stay with her and her father. But when her confidence at gymnastics is knocked, Leigh finds herself caught up in an underground world of moped crime with her brother. Starting to find excitement and the attention she has been so desperately needing, Leigh stands at a crossroads between her gymnastic dreams and an exciting new world.

Synopsis – Maud starts work as live-in nurse to glamorous ex-dancer Amanda, who is now dying and unable to walk. As Amanda grows friendlier, the lonely, young Maud becomes enraptured, but her fixation soon mutates into an obsessive mission to save Amanda’s soul.

Synopsis – The story of two sisters who grew up on the fractious Irish border. When one of them, who has been missing, finally returns home, the intense bond with her sister is re-ignited. Together they unearth their mother’s past but uncovered secrets and resentments which have been buried deep, threaten to overwhelm them.