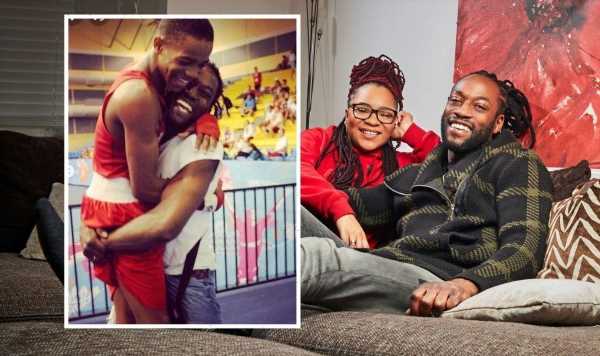 Gogglebox viewers have been entertained by Marcus Luther and Mica Ven since they joined the Channel 4 show in 2018. The comedic couple from South London have four children between them. Although Mica’s daughters from a previous relationship, Sachelle and Shuggy, have appeared on the show previously, not much is known about the pair and their family’s life off-screen, and it has been revealed that Marcus’ son from a previous relationship is a rising sporting star.

The happy couple are often praised by fans of the show for how they make each other laugh and support one another.

Marcus and Mica have a son together, Yash, and much like his partner, Marcus has a son from a previous relationship, Shiloh Defreitas.

The 22-year-old doesn’t need the popular Channel 4 show to build his profile, as he has already started to carve a name for himself as a professional boxer.

Athlete Shiloh goes by the name of Sugar Shy when in the boxing ring.

Sugar Shy has 11,400 followers on Instagram and has appeared in fights at the O2 in London.

Marcus is a keen boxer, and although he doesn’t talk about it on Gogglebox, he is a boxing coach and gym owner.

He founded TM Boxing Gym in 2009, focusing on working with disadvantaged young people.

Shiloh won gold for Team England at the Commonwealth Youth Games in the Bahamas in 2017, which marked a key moment for the young star as he swapped his amateur pedigree for the professional ring.

As Shiloh’s career grew, it highlighted the work Marcus and his gym were doing.

Marcus previously said: “I’m known for Gogglebox, but now people will see that I’m not just about sitting on the sofa.

“I’m about boxing and have been for years.”

Talking to the BBC at the end of last year, he opened up about the dangerous side of boxing.

He described: “Shy told me that he’d never let me pull him out of a fight and would rather die in the ring – but he’s my baby.

“He doesn’t want me to throw in the towel, but am I going to sit there and watch my son potentially die in the ring?

“We love the sport, but I’ll always choose my boy over boxing, any day of the week.”

Fans wondering if the young boxer will ever appear on the show will have to wait a while, as Marcus shared: “Gogglebox is not for everyone. Not everyone can ‘Goggle’. “He’s too aggressive. Me and him just argued so I told him to sling his hook.

“The producers were trying to help him out but then he’d go off on one again.

“No Gogglebox for him, he’s a fighter.”

New episodes of Gogglebox air on Fridays at 9pm on Channel 4.