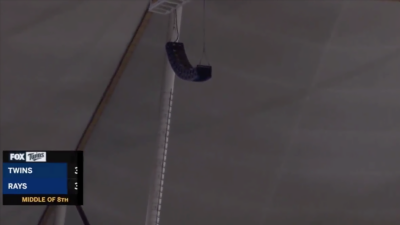 While the Rays were unable to stop the red-hot Twins from getting a win on Friday, at least Tropicana Field was once again victorious over Minnesota third baseman Miguel Sano.

In the top of the eighth with the score tied 3-3, Sano smoked a ball high and deep into left field. It looked as though it’d be a sure-fire home run, but thanks to some serendipitous speaker placement, the ball ricocheted away from its original trajectory and landed into the glove of Willy Adames for the final out of the inning. Sano was clearly frustrated with what happened, but so was Twins broadcaster Bert Blyleven who said, “blow up this place!” just before the feed cut to commercial.

The Twins broadcast noted that this isn’t the first time that this has happened to Sano. In 2016, Sano hit a pop-up off the roof of Tropicana Field which was caught for an out by Evan Longoria. One year before that, he hit the catwalk above left field which resulted in an RBI double because the Rays didn’t seem to realize the ball was still technically in play after the bounce.

As for what happened on Friday, it’s obviously great to hear the resignation of both broadcasters’ voices once the ball hits the speaker, and even greater to see Sano’s reaction that just screams “ah shit, here we go again.” But the best part of the clip is the three seconds of silence after Blyleven’s call to blow up a ballpark so that the viewer has time to digest what was just said.

Lucky for the color commentator that the Twins don’t leave town until Tuesday, which should give airlines plenty of time to forget about Blyleven’s joke and scrub him off of any no-fly lists.