In just under a week we will know who will be pulling on the gold frock for the Diamonds at the Netball World Cup in July, with selectors getting together this weekend to put together the team charged with defending the title they won in 2015.

Crucially, there is no selection camp for players to have a final tilt at proving themselves, so it will be a mixture of Super Netball form, prior international experience and proven combinations to get them over the line. Which makes this a blockbuster Super Netball weekend as players go all out to put themselves front of mind. 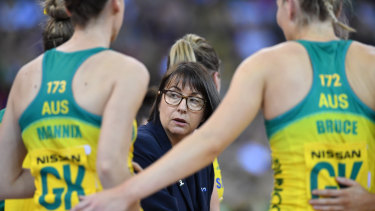 Coach Lisa Alexander’s Diamonds team will be announced next week.Credit:AAP

The midcourt and the shooting lines are where all the action will be. There is a glut of midcourt talent for the Diamonds selectors to choose from, and the form of Gretel Tippett may just shake things up in the shooting line.

The defensive line virtually selects itself, although the injury cloud over incumbent Diamonds goal keeper Courtney Bruce will be a concern. Having said that, I can't see her being left out of the team, with Vixen Emily Mannix just shading the Swifts' Sarah Klau for the second goal keeper position. Both Collingwood’s April Brandley and the Vixens' Jo Weston have had solid starts to the season and should retain their spots.

In the midcourt, the first name in has to be the brilliant Liz Watson. But who will partner her is anyone’s guess.

NSW Swifts midcourter Paige Hadley has made a strong case for selection, and for mine is one of the best performed midcourt players this season. After her it comes down to a contest between Vixen Kate Moloney and Collingwood pair Kelsey Browne and Kim Ravaillion. Both Browne and Moloney toured with the Diamonds in January, and that incumbency puts them ahead of Ravaillion. Browne’s two years feeding Diamonds captain Caitlin Bassett at Sunshine Coast Lightning might just get her over the line.

The final midcourt position is the wing defence spot, and here is where is gets interesting.

Significantly, the team can be drawn from any Australian player in Super Netball. Players don’t need to be a part of the squad to be considered, which opens the door for Collingwood’s Ash Brazill to force her way in after being left out of the squad last year despite being one of the best performing players in the league. She is in fine form again this year, second only to Vixen Renae Ingles (who has not made herself available for selection) in terms of intercepts by a wing defence.

Despite that she is up against stiff competition in Diamonds vice-captain Gabi Simpson, Giant Jamie-Lee Price – who was outstanding on the January tour – and Fever’s Jess Anstiss. Both Price and Anstiss might have a slight edge over both Brazill and Simpson because they have both spent time in the last few seasons in centre as well as wing defence. My guess is that Price will nab the last centre court spot based on both her outstanding form and her versatility.

Which brings me to the shooting line, which should be easy in that it has been pretty settled of late. While I suspect the established four of Bassett, Caitlin Thwaites, Steph Wood and Tippett will retain their spots, the form of Firebirds goal attack Tippet may see the selectors get creative with the goal circle.

Tippett is playing unbelievable netball, posting goal shooter-like stats of 130 goals at 98 per cent, and at 192cm she could easily be selected as a second tall shooter to back up Bassett. This would allow two smaller, faster goal attacks to be selected. One of these would be Wood, who despite shooting just 71 per cent for the season is an outstanding playmaker with an established combination with Bassett.

That leaves the door open for Magpies veteran Nat Medhurst, Vixens gun Tegan Philip or Giants youngster Kiera Austin or to sneak in. While Medhurst might be the sentimental favourite, I am not sure that Diamonds coach Lisa Alexander would be willing to go back to the future. Although a strong outing from Medhurst this weekend against her old club, West Coast Fever, might give the selectors pause for thought.

Given that Austin got the nod as a training partner for January’s quad series in the UK ahead of the more experienced Philip, she may be the bolter for the team. It would be a risk, but sometimes great reward requires great risk. If I was a selector I would be inclined to take Austin, although it would be a huge call to leave out Thwaites.

While it is a combination of things that will get a player selected, ability to perform under pressure is crucial. There is no doubt that this weekend’s round of Super Netball will play a huge part in making and breaking some World Cup dreams.