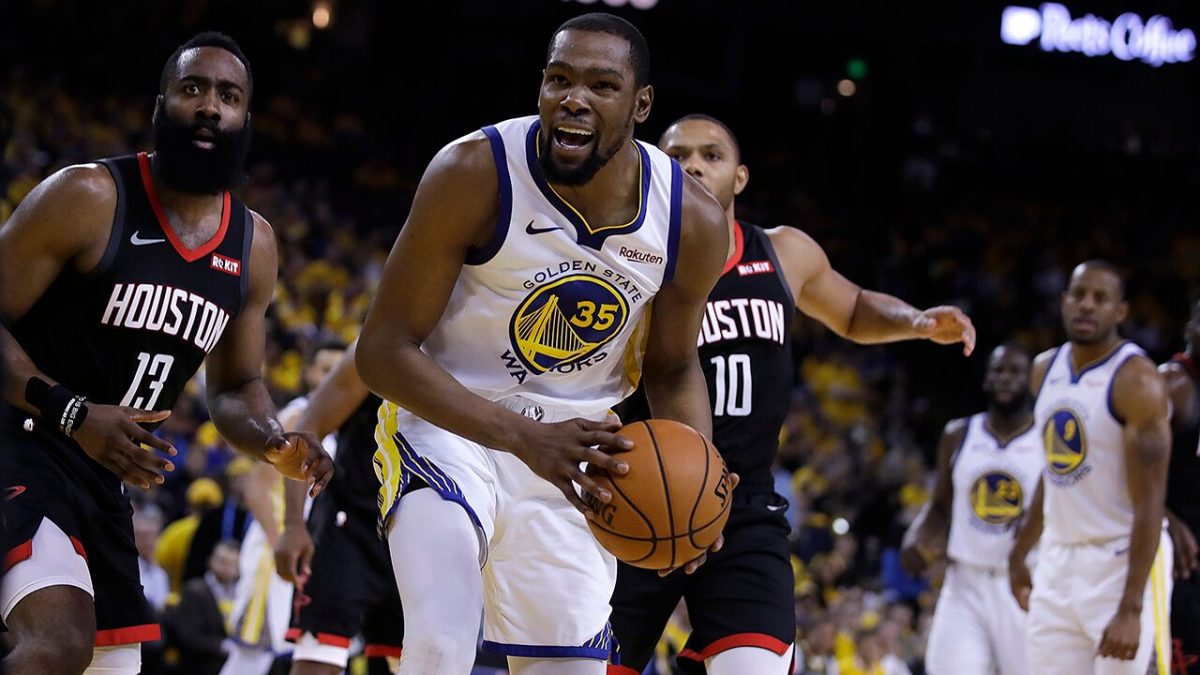 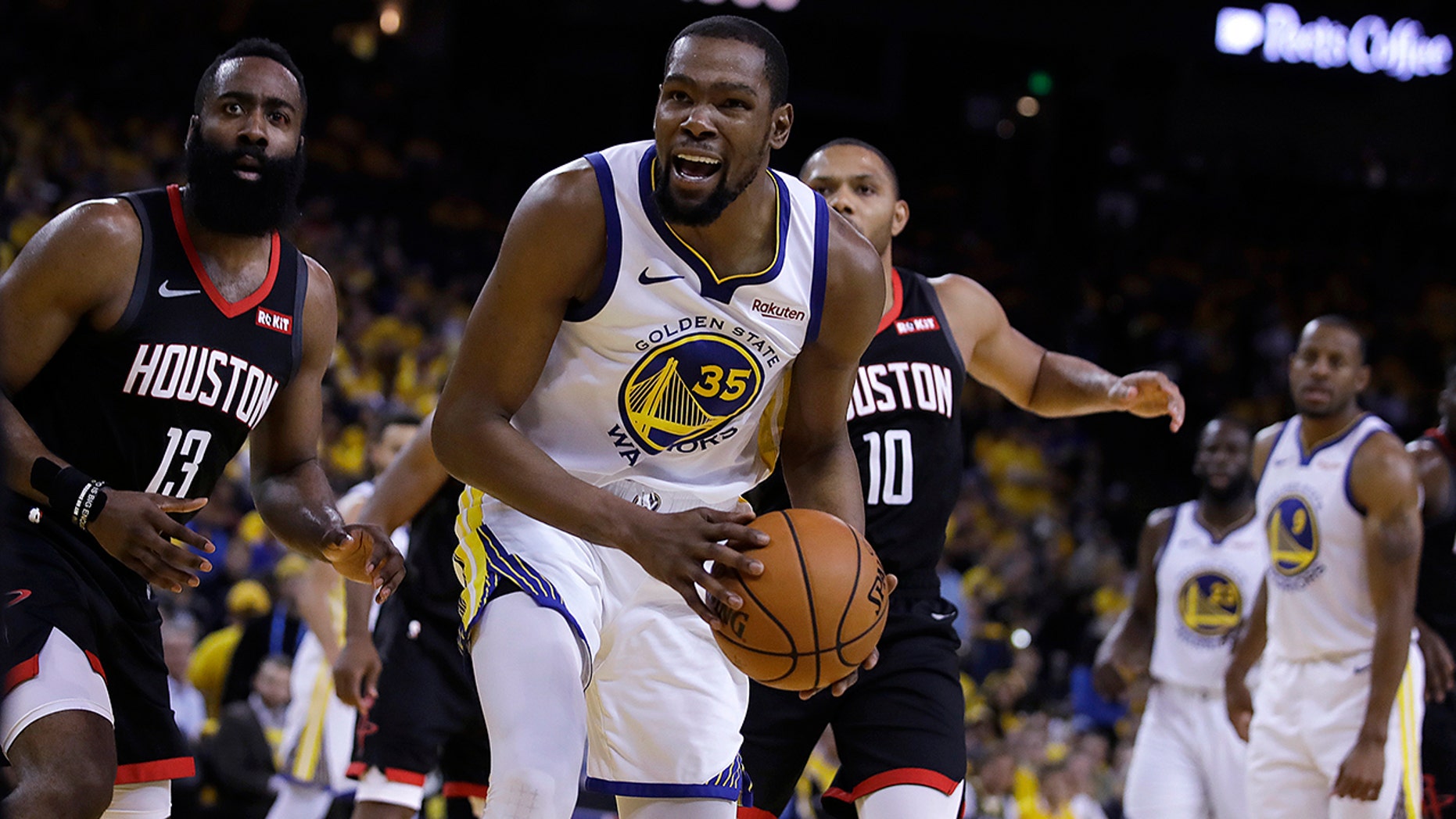 The Golden State Warriors have won plenty of games on the postseason stage without their biggest stars.

This time, Kevin Durant went down, and Klay Thompson and company found a way when the Warriors desperately needed it.

Thompson scored 27 points, including a key layup with 4.1 seconds left, and Golden State overcame Durant's calf injury to beat the Houston Rockets 104-99 on Wednesday night for a 3-2 lead in the Western Conference semifinals.

"Honestly it was a little deflating for a second," Stephen Curry said, "and then we rallied."

Durant was scheduled for an MRI exam Thursday after he strained his right calf late in the third quarter. His status for Friday's Game 6 had yet to be determined, but didn't seem promising.

"We'll have to claw our way to one more win," Curry said.

"They've been here so many times, have been through these battles for the last five years," Golden State coach Steve Kerr said. "They've got a lot of guts. They just pulled together and got it done. There's no speech necessary. They knew what they had to do."

James Harden scored 31 points for the Rockets, who will try to stave off elimination back home in Houston.

"It is a do-or-die but I feel good about it," coach Mike D'Antoni said.

But the Rockets wasted an opportunity in Game 5. After Durant departed, a couple more Golden State stars helped the Warriors close it out.

Draymond Green received his fourth technical of the postseason with 3:39 left, and then knocked down a 3-pointer on the other end. Thompson followed Green's 3 with one of his own to make it 97-89 with 2:33 remaining.

Curry struggled with his shot yet again and finished with 25 points on 9-for-23 shooting. He went 3 of 11 from long range.

Golden State nearly gave it away with an awful third quarter, when the Warriors managed just 15 points and committed six turnovers. The game was tied at 72 going into the final 12 minutes.

Eric Gordon's layup with 40.6 seconds remaining gave the Rockets their first lead since the early minutes.

Green had eight points, 12 rebounds and 11 assists in another spectacular effort on both ends. He supplied the energy for Golden State after two losses at Houston evened the series.

The Warriors led by as many as 20 but missed open looks and even layups, clanking shots off the front rim and allowing the tough-minded Rockets to stay close.

Then, they heeded Kerr's simple message: "Poise and awareness and poise and patience applies to all of life and not just offense," the coach said beforehand.

The Warriors pulled it off without Durant, whose 35.4 playoff scoring average was best in the NBA coming into the game.

"That looked like it was way worse than a calf strain," Green said. "I think we did a great job of fighting through that."

Harden shot 10 for 16 and dished out eight assists. The reigning MVP injured his eyes during the first quarter of Game 2 last Tuesday on a hit by Green as they fought for a rebound. Harden's left eye was still red leading into Game 5.

The Warriors' win guarantees their loyal fans in the East Bay at least one more home game at Oracle Arena before the team moves to new Chase Center in San Francisco for next season.

"Tough loss. We had opportunities," Houston's Chris Paul said. "Rebounding, we actually was right there in the rebounds. We've got to be better, offensively, defensively, especially myself, turnovers. We didn't get stops when we needed to."

The Warriors led the rebounding battle 27-18 after the first half, grabbing eight on the offensive glass, and finished with a 42-39 advantage.

Houston's PJ Tucker, who had 22 rebounds the previous two games, grabbed 10 more to go with 13 points.

The Rockets outrebounded the Warriors 55-35 in their Game 3 win, and then 50-43 on Monday in Game 4 — getting 20 from Clint Capela in the two victories. Capela had 14 on Wednesday.

Golden State held an edge on the boards in both Games 1 and 2.

Rockets: Eric Gordon started 0 for 8 before hitting a 3 with 7:45 left in the third. … F Danuel House sat out again after missing the previous two games with an inflamed right big toe.

Warriors: Green's eight assists in the first were one off team record for a playoff quarter. Tim Hardaway once had nine in 1991. … Reserve G Shaun Livingston played after he had been questionable with a sore left hip. … Injured C DeMarcus Cousins, who could return at some point this postseason from a torn left quadriceps muscle, did some rehab agility work on the court.