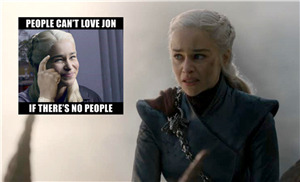 Game of Thrones delivered one of its wildest episodes ever this past Sunday night, and fans are still taking over social media with discussions, analyses, theories, and jokes about that fiery twist. While one of the episodes most controversial moments has driven a lot of serious conversation, it has also inspired a ton of hilarious memes. Spoiler alert: This post contains spoilers from Game of Thrones Season 8 Episode 5, "The Bells." These Daenerys Mad Queen memes from Game of Thrones are the perfect way to keep fans laughing while they wait for the series finale.

The penultimate episode of the series fulfilled a fan theory about Daenerys that has been bubbling below the surface for the run of the show: that she may follow in her father’s footsteps to become a Mad Queen when she finally arrives in King’s Landing. Sure enough, as Dany flew into the royal city on Drogon, she ignored the bells of surrender and instead burned the entire city and everyone in it to ash. The surprising murder spree divided the fandom into two camps, with half of the show’s diehard fans criticizing the Season 8 writers for abruptly turning Daenerys into a villain, and the other half arguing back that Dany’s descent into murderous rage had been clearly foreshadowed throughout the series’ run.

But you know what is a whole lot more fun than going back and forth about minute, specific character details and arguments where there really is no actual answer? Cracking some jokes about what happened! Check out all of the funniest memes that were born from Daenerys’ descent into Mad Queendom in the most recent episode:

As you can see, a lot of the memes blowing up on Twitter following Dany’s big breakdown revolve around predictions of how the rest of the characters on the show will respond to her rampage in the series finale. For instance, Sansa has been right not to trust Daenerys all along, and Jon Snow clearly had a change of heart after seeing his girlfriend/aunt murder hundreds of innocent people. Since Episode 5 ended before we actually got to see Daenerys land with Drogon, it is evident that the series finale will largely revolve around the remaining main characters confronting Dany over her murderous actions.

In fact, probably the most popular and widely accepted fan theory headed into the series finale is that Daenerys will wind up dead before the sow comes to its end. The promo teaser for the episode shows Daenerys becoming the queen of Westeros at long last, but with the entire city of King’s Landing in ashes and Jon Snow, Tyrion Lannister, and Arya Stark all seeing Dany in a new light after her massacre, her reign probably will not last all too long. The jury is still out on who will kill Daenerys and on who will inherit the Iron Throne from her, though, so we will just have to wait to find that out. Until then, though, at least we have these memes and jokes to help bide the time.