NSW Premier Gladys Berejiklian has been told by other state leaders that she must consult national cabinet about any move to deviate from an agreed strategy to contain COVID-19, after she floated plans to relax some restrictions once 50 per cent of the state is vaccinated.

During Friday’s national cabinet meeting some other state leaders asked Ms Berejiklian to return to that forum if she intended to abandon a plan to reach zero community transmission or significantly ease restrictions before a vaccination target of 70 per cent is reached. She did not object to the request. 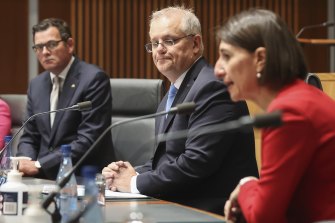 Under the national plan, states are supposed to use lockdowns and restrictions to pursue zero daily cases of COVID-19 transmitted in the community until at least 70 per cent of eligible Australians are vaccinated, with further freedoms granted at 80 per cent.

Victoria’s lockdown was extended for another week on Wednesday after the state recorded another 20 cases of coronavirus, with six of those people in the community during their infectious period. Mr Andrews also moved to further tighten cross-border travel with NSW after that state recorded another 344 cases.

Public health leaders from the Burnet Institute and the Victorian branch of the Australian Medical Association said NSW had already deviated from the zero-case target.

They both backed the comments of Australia’s Chief Medical Officer Paul Kelly last week that there was no sign that the outbreak was “heading rapidly towards zero” and that a “circuit breaker” was required.

Professor Kelly’s comments came on the same day as the national cabinet meeting, where Ms Berejiklian said her state was considering granting some freedoms after a 50 per cent vaccination target. She used the example of a fully vaccinated hairdresser being able to resume business.

Mr McGowan said on Wednesday that the NSW government would be “risking the lives of their citizens and everyone else” by not attempting to drive cases down to zero.

“The NSW government can’t just go out on its own and do something different to what is agreed nationally,” he said. “NSW just needs to crush and kill the virus, that’s what every other state has done.”

Mr Andrews has repeatedly put public pressure on his NSW counterparts in recent weeks, reminding Ms Berejiklian of national cabinet’s agreed strategy, calling for a ring of steel around Sydney and stating that localised lockdowns of hotspots do not work.

Former deputy chief medical officer Nick Coatsworth said he was surprised state premiers would pressure NSW into alignment with the national approach given many of them had made unilateral decisions during the pandemic.

He said the state’s vaccine-focussed strategy to exit its lockdown might be the only option because of the difficulty of reducing cases of the highly infectious Delta variant close to zero.

“The problem with the other states is they’ve never had to cope with a significant outbreak of Delta,” he said. “NSW is in uncharted territory, let’s help them chart the way forward instead of this criticism.” 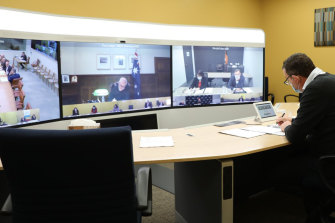 Ms Berejiklian maintained she was committed to the national road map this week. “But please know that once we hit 50 to 60 per cent, lockdown plus easing some restrictions is very different to what the Doherty report says must happen at 70 per cent,” she said.

She spent July repeating the aim of driving the number COVID-19 cases that were infectious in the community toward zero. In recent days, as case numbers have climbed, Ms Berejiklian has described this target as an “aspiration”.

While the national road map for reopening is not legally binding and each state can make autonomous decisions, the premiers’ request for NSW to consult on any future shift could present a political deterrent to a faster reopening. The state’s lockdown is scheduled to end on August 28.

The federal, Victorian, NSW and WA governments all declined to comment on the confidential national cabinet discussions.

Two Victorian ministers, speaking on the condition of anonymity, told The Age there is frustration within the government about the way NSW is managing its outbreak. They said the focus had shifted to mitigating the ongoing risk of leaks from the state which threaten to plunge Victoria into repeated lockdowns in the coming months.

“I suppose now it’s at the point where we’re shrugging our shoulders and shaking our heads because the outbreak’s been allowed to spiral,” one minister said. 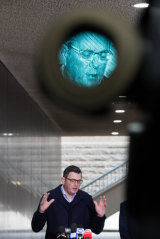 Burnet director Professor Brendan Crabb said questions about the length of Victoria’s lockdown were of less concern than the way it would deal with the ongoing threat of COVID-19 crossing the border.

“It’s about what we can do to mitigate that. If NSW won’t do a ring of steel to protect country NSW and the rest of Australia, what will happen? I don’t have a good answer to that, but I’m very worried,” he said. “We have six months of this realistically, in my view.”

There are differences in the type of lockdowns imposed in NSW and Victoria.

Sydney’s lockdown rules vary across the city. NSW allows real estate inspections and Victoria does not. People in NSW are allowed to gather in groups of two outside whereas Victorians can only meet with others if they are exercising.

Victoria’s essential worker list is explicit whereas NSW doesn’t have a defined list and allows workers to use their judgment to determine whether they are essential. Essential workers have been one of the main contributors to the spread of the virus in NSW.

President of the Victorian branch of the Australian Medical Association Roderick McCrae said the approach of NSW was “fraying the cohesion needed for Team Australia”.

“Somebody needs to point out that NSW has never undertaken a proper hard lockdown, including things like a curfew and travel limits and shutting down businesses with the aim of stopping people from moving,” he said. “It’s not too late.”

Professor Crabb said NSW should have a ring of steel around Sydney prohibiting movement into the regions and a night-time curfew.

About 57.5 per cent of people in NSW have received at least one vaccine dose, compared with 57 per cent in Victoria and 49.5 per cent in WA.