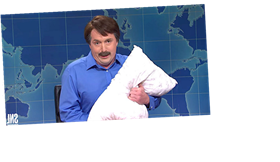 “Weekend Update” shredded MyPillow CEO Mike Lindell (played by Beck Bennett), portraying him as a wacked-out conspiracy theorist who gets his ideas from the pillow he’s constantly clutching.

Anchor Colin Jost attacked “Lindell” for getting himself bounced off Twitter by spreading election lies that inspired the Capitol insurrectionists.

“Well, hold on there, Buck-o, I didn’t inspire no insurrection [to] nobody!” Bennett barked in one of his most dead-on impersonations. “I’m just a normal American ex-crack addict turned pillow CEO and adviser to a former president.”

As for his controversial meeting with Donald Trump at the White House earlier this month to discuss overturning the presidential election, “Lindell” called it a “standard pillow meeting.”

He explained: “I just suggested the military overthrow the government,  and look, if that’s not democracy I don’t know what is.”

Bennett’s Lindell admitted he gets his best “political ideas” from his constantly-clutched pillow.

“What’s that, MyPillow?” he asked. “Really? Wow! MyPillow said Dominion overran the voting machine algorithms so that China could swing it for Biden, with Hugo Chavez, Kim Jong Un and Chrissy Teigen!”

“Dude, you are all over the place,” Jost pulls him up at one point.

Check it out in the video up top.