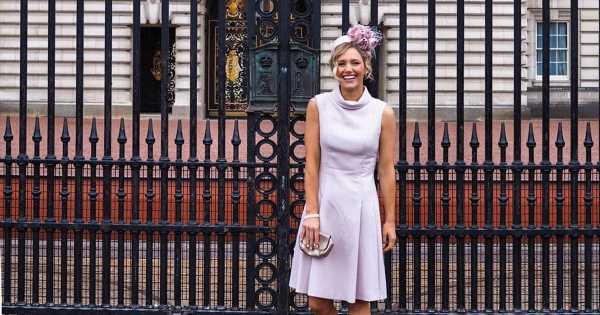 An Instagram influencer has revealed an inside glimpse of what really happens at the Queen's garden parties at Buckingham Palace.

Laura-Ann, from Belfast, Northern Ireland, boasts 64,000 thousand followers on her all.thats.pretty Instagram profile and post abouts everything from her two boys to building her new house.

But this week her followers were in for a real treat as she joined her mum at  garden party at Buckingham Palace.

In true influencer style, Laura-Ann took lots of behind-the-scenes clips – including of her getting a little telling off from the Queen's lady-in-waiting.

Laura-Ann, 30, is a huge fan of the royal family and recently met the Duchess of Cambridge on her trip to Northern Ireland with Prince William earlier this year.

And she couldn't contain her excitement as she accompanied her mum to the plush garden party.

Looking beautiful in a lilac Hobbs dress and a matching floral headband by milliner Laura O'Hanlon, Laura-Ann took her followers with her as she went through the hallowed palace gates.

She then took a few pictures from inside the palace – which is strictly not allowed – and reviewed the cakes on offer.

The Queen's scones got a nine out of a ten but Laura-Ann admitted she was disappointed there wasn't any champagne on offer at the swanky bash.

The beverages on offer were strictly non-alcoholic.

Her next clip shows the Queen dressed in bright pink for the occasion as  Laura-Ann positioned herself in the front row so she could give flowers to her Majesty during her walkabout.

As the Queen approached, Laura-Ann performed a deep curtsy and said: "Your Majesty I've got some flowers for you, nice to meet you. You look beautiful in pink today."

She added: "Have a lovely tea" and her majesty replied "thank you very much".

The Queen gratefully took the pretty bouquet which matched her outfit but her lady-in-waiting wasn't so impressed with the gift.

She said: "It's easier for me to carry them, then the Queen can have them when she goes indoors."

But Laura-Ann was in such shock that she could barely speak as well-wishers soon gathered round to congratulate her.

She said giving the Queen the flowers was a "life highlight".

She added: "She doesn't like phones! So I put mine down at my feet before she came. Thankfully my mummy got a video and the girl to the left of me got some photos. It was just amazing!"

After the shock at meeting the Queen had subsided, Laura-Ann took some snaps in the garden showing the palace swimming pool and the Queen's summer house complete with decorative corgis.

After all the excitement, Laura-Ann and her mum went for a drink and she admitted she thought it was 'odd' that only tea and iced coffee were served at the party.

Proving she's been a long-time royal fan, Laura-Ann also shared a picture of her and her mum giving flowers to the Queen 20 years ago at the Balmoral Show.

She also posted snaps of her meeting Kate and Meghan Markle during their trips to Northern Ireland.

While everyone hopes of bringing home a souvenir, Laura-Ann said it wasn't to be.

Sharing her 'loot' from the party, she showed a leaf from the garden, a piece of gravel from the quadrangle and two sugar cubes.

She said: "The spoons didn't even have royal emblems on them or anything. I think they know the tricks."