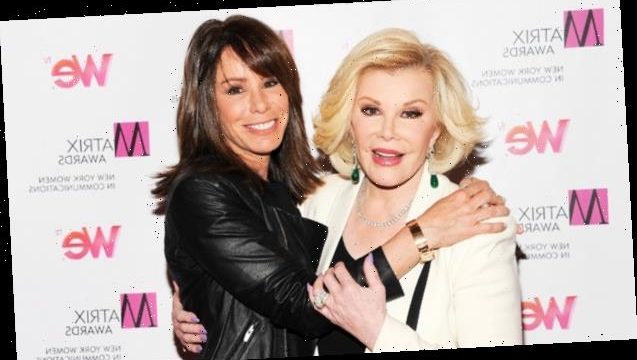 Melissa Rivers started to post her mom, Joan Rivers’ old joke cards in the beginning of quarantine. She told HL what prompted her to share them.

Joan Rivers‘ commentary on the happenings of the world through her eyes are sorely missed, especially during a year like 2020. In an effort to give people a laugh and answer the common question of “What would Joan be thinking right now?,” her daughter Melissa Rivers has shared a collection of her old joke cards on Instagram.

“Everybody is always like, ‘What would your mom think? What would your mom say?’ And I thought, I’m not going to try and guess… even though in my head, I probably could,” she explained on the HollywoodLife podcast. “I started going through the cards with her old assistant, and then some friends and we were like, let’s just start posting them.” LISTEN TO THE HOLLYWOODLIFE PODCAST HERE!

The “Group Text” podcast host revealed that her mother had “the famous filing cabinet,” held all of her jokes. “She would have them on scraps of paper and and she or the assistant would put them on a card and file them for cross reference. I think we had something like 78,000 unique cards.” Melissa added that Joan, who passed away in 2014, “would have a lot to say about a lot of things” going on right now. The way modern life and the entertainment industry has changed prompted Melissa to start a new podcast miniseries in conversation with comedians.

“The first one we’re going to post is with Bob Saget and we talk about how comedy as we know it might be dead,” she explained. “That’s kind of the question I pose. It’s really ‘What does comedy in the future look like?’ Because we’re living in this very hyper sensitive, hyper aware culture right now, out of fear. I think my question is always ‘When are we going to be allowed to make jokes again?’”

On the HollywoodLife podcast, Melissa also spoke about her late father, Edgar Rosenberg, who tragically died by suicide in 1987. This inspired Melissa to get involved in suicide prevention and mental health awareness by joining forces with the Didi Hirsch Mental Health Service as a board member and major supporter. “One of the things we always talk about is erasing the stigma, and that has to do with mental health, and suicide prevention. Mental health, I think, has taken huge leaps forward in that people really talk about it very openly, but I think suicide is still a beat behind,” Melissa said. “At Didi Hirsch, we really try and make all of our services available. We made this very fast pivot into telemedicine and being able to shift to working remotely.”

She continued, “I always think it’s so interesting that something that was one of the most painful, most tragic experiences, and something that I was so angry about, became, at this point in my life, something that is so impactful in a positive way.”

If you or someone you know is considering suicide, please contact the National Suicide Prevention Lifeline at 1-800-273-TALK (8255), text “STRENGTH” to the Crisis Text Line at 741-741 or go to suicidepreventionlifeline.org.