The father tried to stop the thief — but the car reversed into the mother who was holding the child in her arms.

A one-year-old boy has been killed in an attempted carjacking in Texas.

The child was struck by his mother’s own car when a thief tried to steal it during a custody exchange on Sunday night.

According to police, the baby’s parents had met in the carpark of Texas Health Huguley Hospital in Fort Worth around 9 PM.

While the mother was handing the child over, the suspected thief — later identified as Nico Dela-Fuente — attempted to steal her car, CBS DFW reported.

The boy’s father dived into the car to try and stop him; in the struggle the car was thrown into reverse and sped out of the parking spot at high speed — smashing into the mother while she was holding her son in her arms.

They were both thrown to the ground; as the suspect attempted to flee in the car, he ran them both over.

The thief only made it a short distance before crashing into a tree; he then attempted to flee the scene on foot, but quickly collapsed due to injuries sustained in the crash. 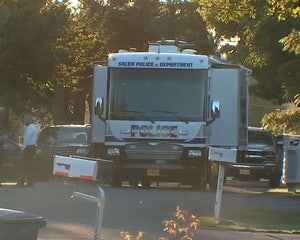 A security guard at the hospital detained him until police arrived to arrest him.

The injured mom was taken to hospital but is expected to survive. However her son, who was rushed to Cook Children’s Medical Center, succumbed to his injuries.

Dela-Fuente, 30, was also hospitalized, but will be taken to Fort Worth Jail once released.

He faces charges of Capital Murder, as well as Aggravated Robbery; his bond was set at $350,000.

The victims have not yet been identified; according to Fort Worth Police, there is no relationship between the family and the suspect.