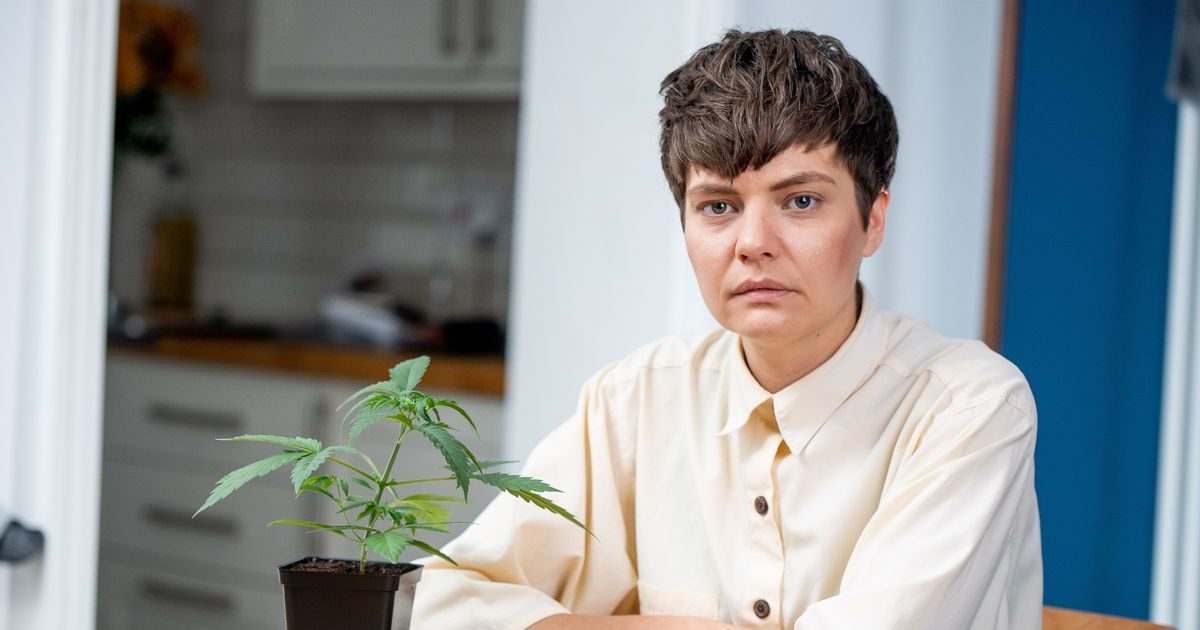 A patient suffering in agony today makes an emotional plea to the Home Secretary to let her grow cannabis at home instead of buying street drugs to end her pain.

Carly Barton, 32, was the first UK adult to get a private prescription but can’t afford £1,400 for legal supplies, and faces a stressful choice of scoring from a dealer or growing illegally.

Backed by 200 supporters, she wants Sajid Javid to change the law so she can grow her own medical supply of the drug safely, without the threat of a “heavy-handed” police bust.

Otherwise, like thousands of others, she is forced to spend £300 a month buying potentially toxic drugs from an intimidating street dealer.

Carly suffered a crippling stroke at 24 and was forced to end her studies in fine art sculpture at Brighton University because of agonising post-stroke neuropathy and fibromyalgia.

For six years she experienced such horrendous pain she was unable to leave her home or lead a normal life.

At one point she was taking 29 pain pills every day and ended up on fentanyl, which is highly addictive and, in concentrated form, is reckoned to be 50 times stronger than heroin.

It was only when friends convinced Carly to try cannabis that her agony vanished.

And her hopes were raised after the law change last year prompted by child patients Alfie Dingley, six, and Billy Caldwell, 12, who won licences for the drug to treat their severe epilepsy.

Carly was the first adult in the queue to get a private prescription and used an inhaler to administer two different kinds of cannabis flowers, costing at least £1,400 each month.

Carly said: “The whole country is in the same situation – if you can afford a couple of thousand pounds a month then you can be classed as a patient.

“If you can’t, you’re classed as a criminal. That’s absolutely insane. Thousands of patients are in the situation where they can’t afford the cash each month to be well.

“Access on the black market is much cheaper and so that’s what they do.”

She added: “At first for me buying cannabis illegally was very scary.

“I was still quite weak and vulnerable and using walking sticks.

“In all weathers I went to dark car parks to meet strangers. I was sold mouldy products, which can give you pneumonia. I was vulnerable. Now I have a trusted network.”

This week Carly vowed to break the law and grow cannabis plants at home – despite being warned by police they would not turn a blind eye.

Her letter to the Home Secretary – signed by sufferers who live in every police force area in the UK – begged Mr Javid to end the nightmare.

The 32-year-old said: “We should not need to be living in fear of the very people employed to protect us.”

Carly also calls for police reforms, after being contacted by patients whose homes had been raided by police in the middle of the night.

Carly said: “It is important to take away patients’ need to access unsafe products and the likelihood they’ll have their door kicked in.

“A young mum of four kids I spoke to this week was in bits. She was growing three plants to treat her severe epilepsy. She was seizure-free for eight months on her own oil.

“At 4am there was a boot through her door while her kids were in bed, really heavy handed.

“Tactical gear scared them to death, and all the medicine was gone. She’s now in a state of continuous seizure activity. All for the sake of three plants.”

Carly says the police lack advice on how to handle cases like this.

She said: “There’s a postcode lottery and it is a complete shambles.

“The reason it exists is because the Home Office are not giving any guidance to police forces to allow them to use anything other than complete brute force.”

Carly has set up a database and more than 200 patients – who are under the guidance of a hospital doctor but can’t access prescribed cannabis – have registered their “cannabis gardens”.

If home growing was legalised, police would be able to access the database to check they were legitimate and avoid needless arrests.

Mr Javid claimed the Government had made it easier for people with conditions including epilepsy, MS and cancer.

But NHS England data shows the drug has been prescribed only 450 times since the law was changed.

Carly, who works for the United Patients Alliance, says it could take an “eternity” for tests to satisfy health chiefs cannabis is safe.

She said: “It’s going to be a long road before the NHS are on board – they want randomised controlled trials which will take three years to complete before recommendations.

“But cannabis treats over 300 conditions so the trials could take an eternity. We need to provide something for these patients.”

In 2010 aged just 24 I suffered a stroke after which I was diagnosed with significant nerve damage, post-stroke neuropathy and fibromyalgia.

I spent the rest of my twenties in near constant torture, taking 29 heavy pharmaceuticals such as morphine and fentanyl, which caused devastating side effects whilst doing little to control my pain.

I was never truly at ease having to break the law to treat my illness, but neither could I consider going back to a wheelchair and constant agony.

When you addressed Parliament in July last year, announcing your intention to legalise medicinal cannabis, it felt like a landmark day for me, the 200 patients here undersigned and thousands of others.

From November 1 2018, we would no longer have to meet dealers down dark alleys or endure sleepless nights worrying about growing cannabis at home.

Instead we could now go to our doctors and have our medicine prescribed by the NHS. Except it hasn’t worked out that way.

In November, I became the first person to receive a private prescription for medical cannabis. It cost £1,400 for one month’s supply.

In March 2019, I became the first adult patient in the UK to be granted an NHS script for medicinal cannabis to continue with this course of medication. Weeks later, my doctor’s professional judgement was blocked by local NHS managers.

This left me with the options to return to a wheelchair and potentially addictive pharmaceutical opioids, with devastating side effects; somehow raise £1,400 a month for private medicine; source unsafe street cannabis; grow my own safe supply.

As law-abiding citizens I and the undersigned have no option for safe access to our medicine, other than to grow cannabis in our own homes.

Together we launched a scheme where we register our small gardens (under 9 plants) with my non-profit organisation, Carly’s Amnesty, and notify every Police and Crime Commissioner in the country.

With your blessing and encouragement, we would be able to run Carly’s Amnesty as a pilot in Sussex and other jurisdictions.

Today we are urging you to meet with me and my Carly’s Amnesty supporters to discuss how we can end the uncertainty for police officers. This would give forces discretion whilst giving desperate patients the protection they need.

They do not need to be living in fear of the very people employed to protect them. The decisive, compassionate leadership you displayed last year is, once more, required again.

Is it time for the law to be relaxed?

The right to health is a universal human right and access to treatment one of the great achievements of the welfare state.

Effective though the NHS is in delivering care across a broad spectrum of conditions, orthodox medicine is yet to find cures for epilepsy, cancer, fibromyalgia, multiple sclerosis or Crohn’s disease.

But in the meantime many patients have found comfort from cannabis, a herb with an ancient genealogy in medical practice and included in the British Pharmacopeia until 1932. New applications have since been found, for reducing seizures, managing pain or easing side effects of chemical treatment.

Reported benefits have even swayed a Home Secretary not otherwise known for permissiveness to make medical cannabis more widely available.

But legal changes remain difficult to put into practice and the costs are excessive, leaving many dependent on unreliable, black markets – or to grow their own.

There are definite advantages to controlling the strains, the inputs added, and cutting out the supply chain. But it comes at the cost of turning one’s home into a crime scene, always at risk from informers and an over-ambitious police force.

The objective of Carly’s campaign is to provide some cover for those who see no choice but continue grow cannabis.

In spite of the media attention surrounding the cases of Alfie Dingley and Billy Caldwell, the number of medical cannabis patients runs into single figures.

In equally restrictive Germany, by contrast, 40,000 patients now have their medical cannabis dispensed at local pharmacies and paid by medical insurance.

Until a functioning system is set up in the UK, sick people will continue to be maltreated by the law.

What problems would legalisation of cannabis solve and which would it create?

Also, who will the casualties be if these different policies are implemented?

Legalisation obviously would reduce criminality and reduce the number of related arrests, which can be large in the UK.

But legalisation would boost population exposure to a psychoactive drug which produces addiction (about 10% of users will meet medical criteria for cannabis use disorder; up to 35% in daily users). It can also induce acute as well as lasting psychoses and potentially life-long psychotic spectrum illnesses, including schizophrenia.

And in young people, it can induce neurological change which may have life-long ramifications in terms of brain function.

Then, there would be increases in intoxication-related accidents; most notably, driving under the influence of cannabis, shown to double risk of car accidents.

If it were legalised in the UK many don’t realise there are also many different ways of legalising. We could go the same path as alcohol and tobacco and allow full commercialisation.

Or, without commercialisation, allowing people to grow their own and use it, but forbid branding.

Beyond decriminalisation, this might be a good middle-ground solution. It would reduce crime, but minimize clinical and public health consequences that greater population exposure and aggressive marketing and branding brings.

Just look at the damage heavily-promoted alcohol and tobacco cause.