“It was very fortunate for us to have something in the can that was able to tell a little bit of that kind of story.”

Johnny Whitworth’s new movie “Still Here” is still releasing amid the coronavirus pandemic — and while it had to find new avenues of release, the timing couldn’t be more appropriate.

Whitworth plays Christian Baker in the film, a journalist chasing down a story on a missing 12-year-old Black girl whose case has been ignored by both the police and greater news media. It’s being released during a moment in which the Black community, too, is pleading to be heard as Black Lives Matter protests continue throughout the country and world at large.

According to the actor, it’s almost fate the movie is coming out now.

Whitworth says he started really realizing the timelines of the project when “there were thousands of protesters out just down the street from me on Hollywood Blvd. and when all that stuff was really going on with the movement in general.”

He went on to praise how social media and the availability of cell phones has really propelled the movement forward and commented on how encouraging it was to see the message carry around the world.

“That energy is what we need. That energy, when you put it out in the world, is gonna create change,” he added. “In different people in different ways. In small and large and just planting seeds just it’s powerful.”

“It was very fortunate for us to have something in the can that was able to tell a little bit of that kind of story from a perspective of a few different characters,” said Whitworth of the film.

The 44-year-old actor was drawn to the movie because he felt “the subject matter was important” and believed “the script was phenomenal.” After meeting with director Vlad Feier, Whitworth had faith Feier would actually “be able to capture what he had put down on paper.”

“The more we moved along in the production process, it became clearer that I made a good choice,” he said. “I was very fortunate to have that opportunity.” 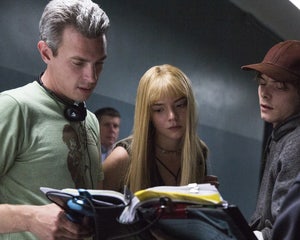 The movie is still opening in select theaters around the country this weekend. In an inventive move to still support theaters that remain closed during the pandemic, the film will also be available to watch on August 28 from the comfort of your own couch via Laemmle Cinemas in Los Angeles’ “virtual cinema” option, which — while still streaming — financially benefits Laemmle.

While Whitworth is happy they’re still able to support theaters in locations where they remain closed, he hopes the movie-going experience doesn’t drastically change in the future.

“The movie-going experience is why I got into this when I was a kid,” he said. “It’s all about the escapism of walking into a dark theater and watching the film. I feel that it’s a blessing to have something that can be seen at this time, to already have something in the can that is appropriate.”

Once again he added, “the only way I can describe it is divine timing.”

“Still Here” is in select theaters August 28 and VOD on September 4.