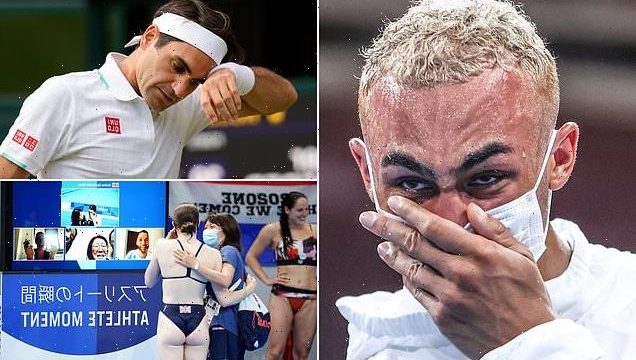 JAN MOIR: Sport stars at the Olympics – and elsewhere – who sulk like surly barbarians at silver medals shame us all

Even if you are not a sports fan, the Olympics is a wondrous spectacle, brimming with all the drama, joy and pain of life itself.

The sacrifice and dedication it has taken for every single athlete to compete for their country? Incredible. Just being in Tokyo makes them all winners.

Like many, I feel pride and awe at the achievements of our sporting talents. But I must confess to a new and thorny emotion blooming within the bouquet of good wishes and congratulations. Shame.

I am ashamed at the way some of our sports stars — at the Olympics and elsewhere — behave when they don’t come top.

Instead of being gracious in defeat and accepting their silver or bronze awards with dignity, they act like surly barbarians. 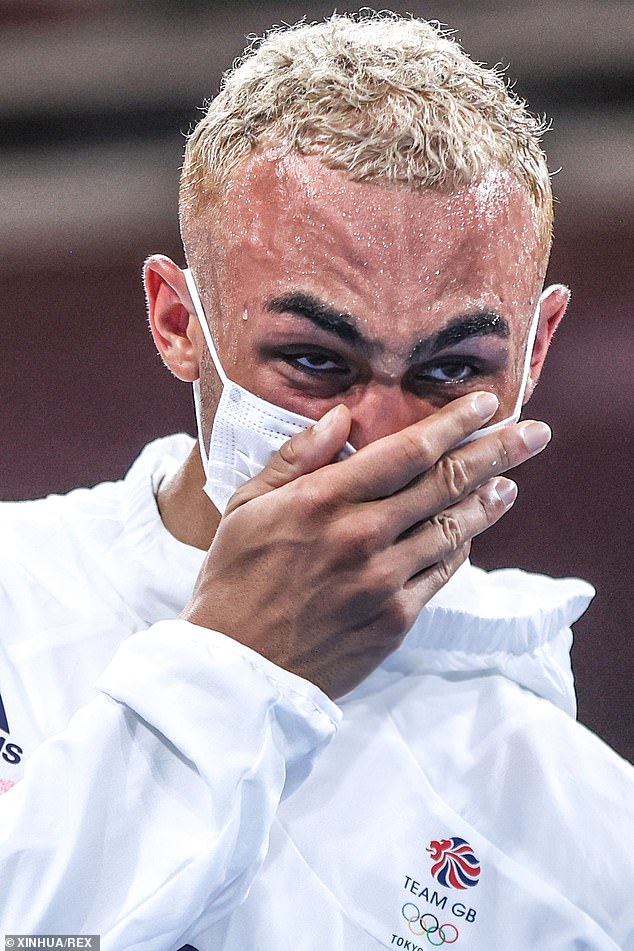 Boxer Ben Whittaker (pictured), 24, from West Bromwich, sulked after missing out on gold at the Olympics this week, and did not congratulate his winning rival, Cuban Arlen Lopez

Boxer Ben Whittaker has been criticised for his reaction to missing out on gold this week, and no wonder.

The 24-year-old light-heavyweight from West Bromwich sulked, seemed unimpressed with his silver medal and did not congratulate his winning rival, Cuban Arlen Lopez. He later apologised, saying he was just ‘disappointed’.

It was hard not to burn with embarrassment on his behalf.

Most of the players were curt to the point of rudeness with officials handing out the gongs, then stuffed their runners-up medals into their pockets as if they were some humiliating indignity to be hidden from public view.

‘I didn’t win silver, I lost gold,’ is their sulky belief.

Until that moment at Wembley Stadium, most of us didn’t realise that this silver disservice was even a thing, and that it has been gathering strength for some time.

Two years ago, the England rugby squad reacted in a similar way after their World Cup defeat to South Africa. 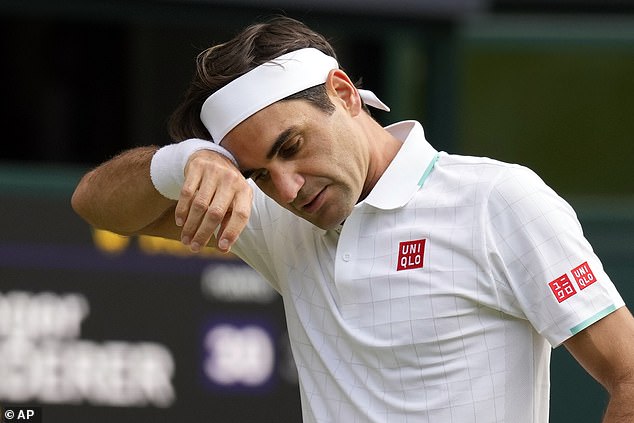 Some players even discarded their silver ‘loser medals’ after the ceremony; such a lack of civility does no one any favours.

One would have hoped that coaches — or even parents! — had instilled at an early age the value of sportsmanship in their charges.

With an emphasis on the fact that these qualities are more important in defeat than in victory. Clearly not.

Perhaps all these men — and they are mostly men — think that being facetious about coming second makes them look like big guys: guys who think you either go big (medal-wise) or you go home, and that nothing matters except winning.

Yet this attitude makes them look more like truculent losers than admirable victors.

Contrast their brutish behaviour with that of Katarina Johnson-Thompson, the UK’s world champion heptathlete, whose medal hopes ended with a calf injury during the 200 metres this week.

She refused a wheelchair brought on by officials and limped across the finishing line under her own steam.

She explained: ‘I started the year in a wheelchair and I was not willing to end my Olympic campaign the same way.’

Don’t you just love her spirit?

A burning desire to be a winner is what champions are made of, yes, but it must not come at the cost of decency. Surely it is important for competitors to show they are grateful for the opportunity to participate — an honour in itself.

Look at tennis star Roger Federer. He has won 20 grand slam finals — but he has also lost 11.

Note that even in defeat he always pays gracious tribute to his winning opponent, no matter how dreadful he feels about losing.

This is in marked contrast to his great rival Novak Djokovic who destroyed two tennis rackets during his Olympic bronze medal match against Pablo Carreno Busta on Saturday. What a big baby.

It’s tough at the top and I don’t underestimate the pressures on athletes. However, in sport and in life, do yourself a favour. Be a Roger, not a Novak. Be a Katarina, not a whiner. 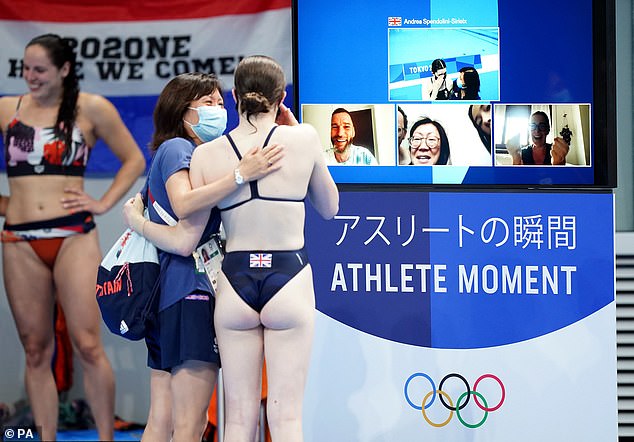 Andrea Spendolini-Sirieix (pictured), made it to the final for the 10m platform diving, but did not win a medal. Her father Fred Sirieix said the most important thing is ‘to have fought well’

And before you toss your silver medal in the bin, spare a thought for all those athletes from countries such as China, Russia and Belarus, many of whom have difficulties their compatriots in the spoilt and selfish West simply cannot imagine.

No mental health issues or loser tantrums for them, thank you very much.

Perhaps Whittaker and others like him are simply a product of the age; young men and women drunk on their own legend, oblivious to the threat of rivals and encouraged to consider themselves matchless and unique.

They blow their own trumpets across social media and they revel in the praise of friends who mindlessly tell them: ‘You’ve got this.’

Then when defeat comes, they simply don’t know what to do. Perhaps they should listen to Fred Sirieix, the French maître d’ who is best known for appearing on Channel 4’s First Dates show.

His daughter, Andrea Spendolini-Sirieix, made it to the final of the 10m platform diving competition, but did not win a medal. At the age of 16, she is the youngest diver on Team GB and has a brilliant future ahead of her.

Yesterday, proud Fred tweeted a quote from Pierre de Coubertin, the man known as the father of the modern Olympic games: ‘The important thing in life is not the triumph but the fight; the essential thing is not to have won, but to have fought well.’

At the age of 74, Susan Sarandon believes ‘the window may have closed’ on the chances of her having another romantic relationship.

But she’s not looking for love: she wants a travel companion — male or female.

‘Age doesn’t matter but I would like to find someone who’s up for an adventure kind of attitude,’ she says.

Can I suggest that Bill Gates seems to be at a loose end at the moment; ditto Matt Hancock?

FASHION TOGS THAT LABEL YOU A FOOL

Are some top fashion houses simply taking the mickey?

It’s as if they are taunting consumers by designing expensive replicas of the clothes worn by the poor and the deprived. 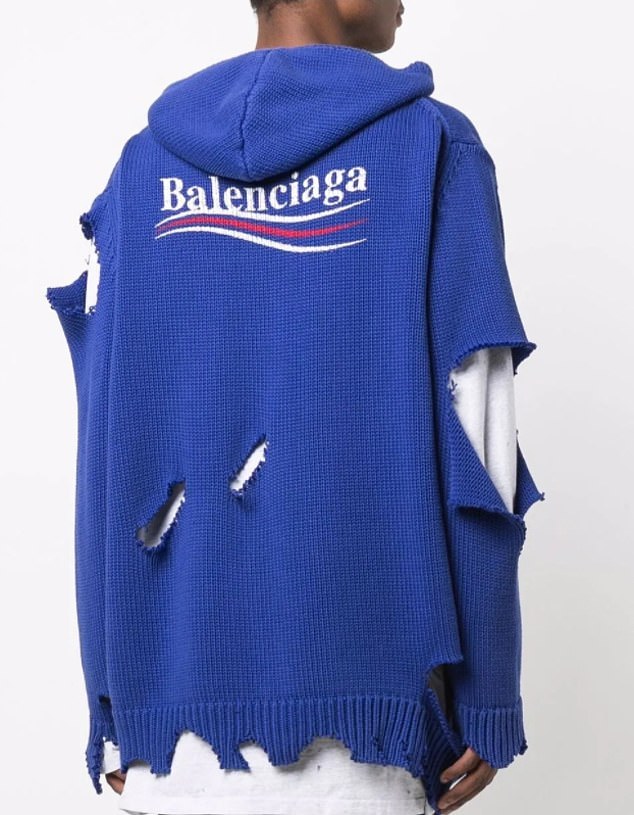 Are some top fashion houses simply taking the mickey? Balenciaga’s new £1,300 hoodie (pictured) has carefully placed holes and is made from 100 per cent polyester

Balenciaga’s new £1,300 hoodie has carefully placed holes and is made from 100 per cent polyester.

It looks like it has been ripped by the family Rottweiler.

Alexander Wang’s hideous denim maxi skirt is a snip at £695, while Alexander McQueen’s denim and shell jacket — an item of clothing which looks like a waistcoat and anorak have mated and spawned — costs £2,540.

What is the point? You will achieve the same fashion effect and spend a lot less money by getting a ballpoint pen and writing ‘IDIOT APPROACHING’ on your forehead.

Noooo! Not the announcement of the Strictly Come Dancing contestants already?

As baker John Whaite — and a bunch of randoms I can just about place — are named as participants in this year’s show, it’s a sure sign autumn is racing towards us, with winter close behind.

And summer barely seems to have started!

NOW WHAT WOULD MEG AND EUGENIE ADVISE SOO TO DO?

Yes, I would like 40 minutes with Meghan. There’s quite a few things I’d like to discuss with the Duchess of Sussex, once I’ve stopped laughing at her latest initiative.

To celebrate her 40th birthday, the Duchess’s ’40×40 project’ encourages women to donate 40 minutes of their time to help other women return to the workplace.

If I were deeply cynical, and actually I am, I might see this as another excuse for privileged, rich women like her to convince themselves they are doing good work simply by telling less fortunate women what they should be doing with their lives. 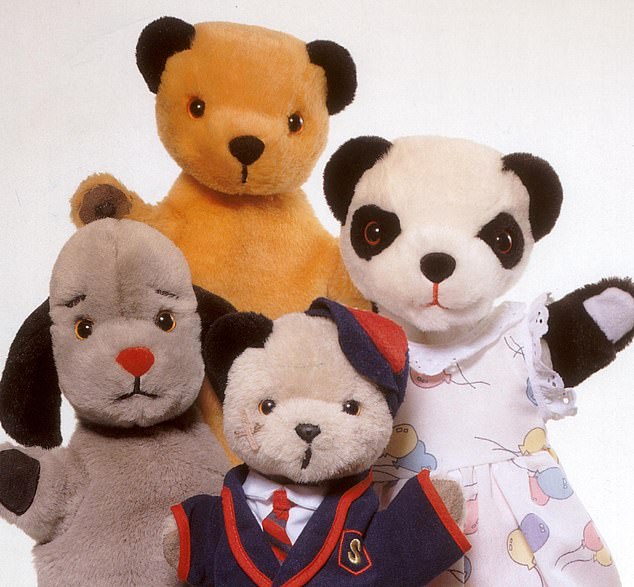 The Duchess’s ’40×40 project’ encourages women to help women return to the office. Princess Eugenie is giving her support – who will she mentor? Soo from The Sooty Show (pictured)?

Part of the 40×40 project is offering advice to women re-entering the workforce. I interpret that as Meghan telling the new nanny to make sure Lilibet’s eco-nappies are disposed of correctly and handing Doria another tea towel.

It is even funnier that infamous career girl Princess Eugenie is giving her support to the project.

Eugenie worked in an art gallery before styling herself as a philanthropist and marrying a roving tequila ambassador called Jack.

Meantime, I like that Meghan is gaining in confidence and starting to believe few women on the planet can do anything good without her guidance.

She is looking increasingly presidential behind her power desk. Don’t say I didn’t warn you.

JEN’S CRISP IS THE THIN END OF THE WEDGE…

Jennifer Aniston admits she stress eats. In times of difficulty, she goes mad and eats one crisp. Only one, mind.

Meanwhile, Gwyneth Paltrow’s self-control is so tungsten-tipped that she allows herself a cigarette — per week. 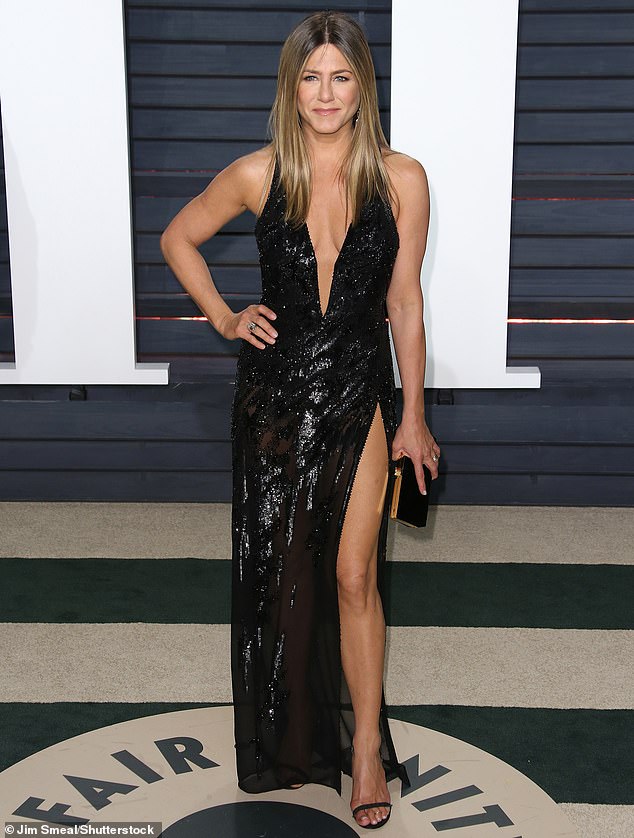 Jennifer Aniston (pictured in February 2017) admits she stress eats. In times of difficulty, she goes mad and eats one crisp. Only one, mind

A blow-out for Liz Hurley is six raisins, while Elle Macpherson hasn’t eaten a carb since 1972.

Crikey, you have to salute their iron discipline — Hollywood stars train like athletes, on perma-diets that prohibit bread, alcohol, processed sugar and dairy.

I remember interviewing Renee Zellweger in a West Hollywood coffee shop, and she wouldn’t have anything to eat because the Oscars were that week and ‘I have to get into a certain dress’.

When I saw her on the red carpet, in a yellow chiffon dress tighter than the skin on a banana, I understood.

Still, one crisp takes the biscuit. As a friend once said, what is the point of the reseal tab on a family-size pack of cheese’n’onion?