Boris Johnson discusses when vaccine impact will be visible

Over-65s will start receiving letters inviting them to be vaccinated from next week, it has today been revealed. The vaccine program is gathering speed with about 20 percent of the UK now having had their first dose – a total of 13 million people. But the latest figures has revealed a disparity between regions, with some areas storming ahead while others fall behind in the rollout.

NHS England data, from December 8 to February 7 reveals which areas are leading in the rollout race.

The analysis shows the East of England and the South West are leading with the vaccination rollout in terms of percentage of the population having had the first jab, with 20.3 and 21.25 percent respectively.

While the midlands has vaccinated a total of 1,890,838 people – the highest on the table.

You can see the full breakdown in the table and graph below. 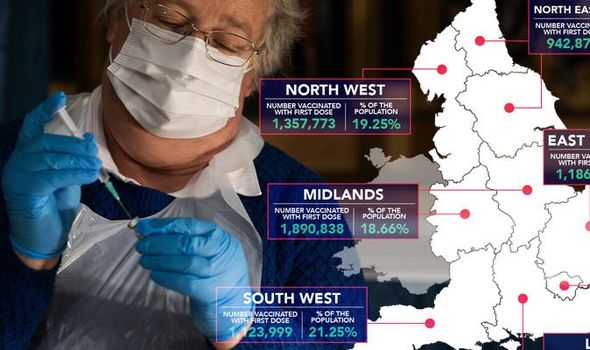 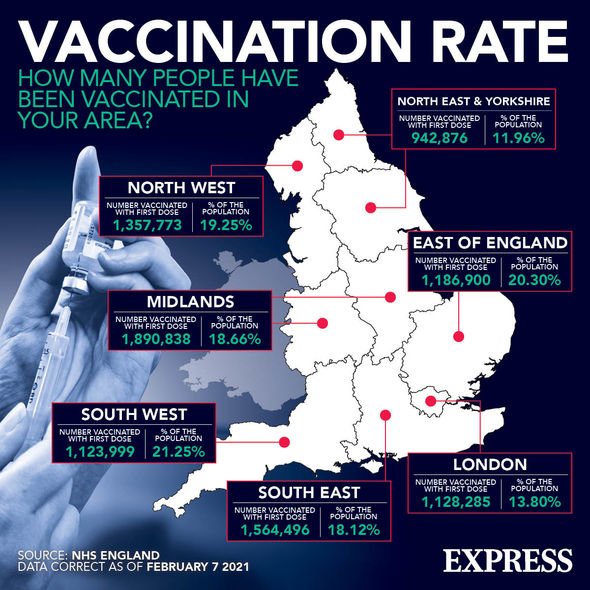 The data also shows that some parts of England have already vaccinated almost 95 percent of the over 70s.

The Government had set a target of completing the top four priority groups by February 15 – and Wales has already achieved this goal.

First Minister Mark Drakeford thanked “everyone who had been working around the clock to reach this point”.

But in England, a postcode lottery means that some areas are lagging behind. Just 76.3 percent of over 70s in east London and 78.4 in north west London have had their first dose, for example, while 93.4 percent in Somerset have had their jab. 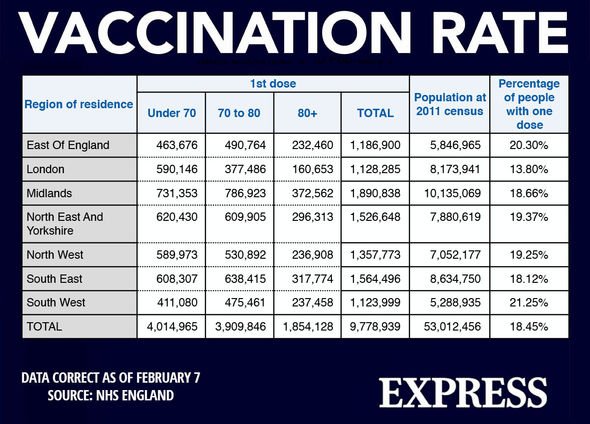 The data shows that the following regions have vaccinated at least nine in 10 of over 70s:

But bottom of the table is north London, Devon, Nottingham and Kent and Medway.

The total number of people who have now been immunised has reached 13,509,108.

This means the NHS must reach another 1.5 million more people over the next four days – an average 375,000 per day – to hit its target by Monday. 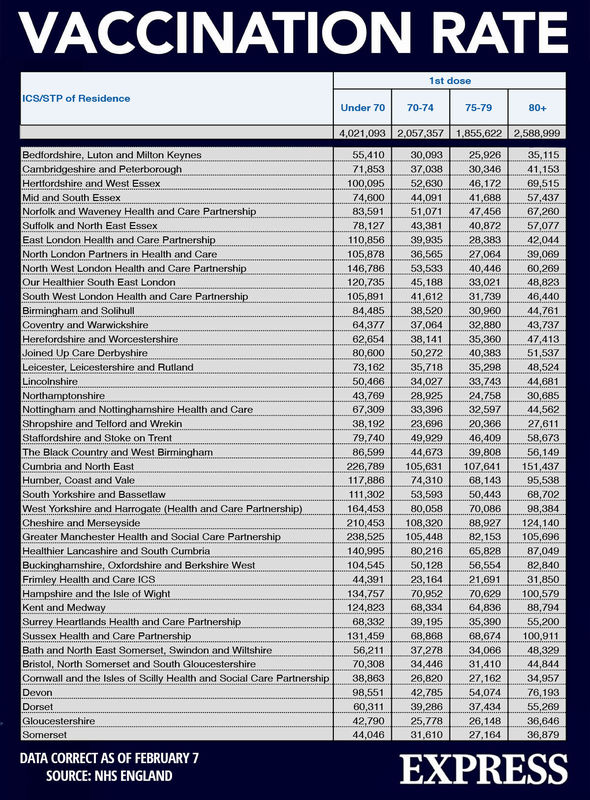 With 524,447 vaccines give out yesterday, it seems the UK will be on track to hit Boris Johnson’s lofty target.

There’s also good news in the latest second dose vaccine figures. Some areas have already started on giving out the second dose of the COVID-19 vaccine to the over 80s, with 23.25 percent take up in Northamptonshire.

Hertfordshire has seen 19.17 percent of over 80s having had their second jab, with Birmingham and Solihull at 18.94 percent and Kent and Medway at 16.72 percent.

A total of 524,447 people have now had their second dose, with this stage averaging about 3,212 jabs per day based on the last 7 days.

The Commons Public Accounts Committee (PAC) has praised the “world-beating” effort to get the jab to the most vulnerable.

But MPs warned there is still a long way to go if the Government is to hit its next target – 32.7 million people to have had the jab by the end of April.

A PAC report said: “We are concerned by departments’ lack of planning for the next phase of the programme and in learning the lessons from what has already been done that will be so vital to the programme’s success.”

The committee added the Government will continue to face “significant challenges” to getsthe jab to “the right people at the right time”.