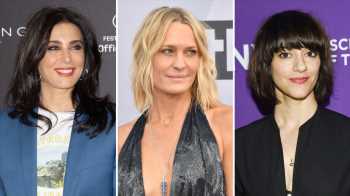 When it came time to remake “Cliffhanger,” a 1993 climbing thriller that featured Sylvester Stallone at the height of his action hero fame, producers hit on a novel concept. This time instead of having some muscle-bound man brave death-defying heights while battling a vicious gang of thieves, why not let a woman save the day?

That bit of gender flipping has turned a reboot few were asking for into one of the hottest projects for sale at this year’s Cannes Film Festival. And not only have the “Cliffhanger” producers committed to casting an A-list actress in the lead role, they’re bringing on a female director, Ana Lily Amirpour (“A Girl Walks Home Alone at Night”), to direct the high-octane project.

“Cliffhanger” isn’t the only big project on sale at Cannes to boast a strong female lead and key female creative talent. Other buzzy projects include “Let Me Count the Ways,” a romantic drama with Emilia Clarke as Elizabeth Barrett; “Radioactive,” Marjane Satrapi’s portrait of Marie Curie; and “Miss Marx,” a biopic about Karl Marx’s younger daughter Eleanor from Italian director Susanna Nicchiarelli and starring Romola Garai.

These films are increasingly “layering female characters, not just showing one-dimensional reactions to situations but showing women as they are, complex human beings, and identifiable to the audience as such,” said StudioCanal’s Anna Marsh.

It’s also in marked contrast to previous festivals where many projects relegated women to roles as wives, girlfriends or helpmates and offered fewer opportunities for female directors trying to find funding or distribution for their projects. Robin Wright, the “House of Cards” star who is in Cannes with her feature-directing debut “Land,” noted that things are changing.

“[Opportunities] are increasing — not as fast as I would like, but the glass ceiling has been broken,” she said.

Armed with a litany of recent hits such as “The Favourite” and “Crazy Rich Asians,” buyers and sellers maintain that backing movies with compelling female protagonists makes commercial sense.

“Female-skewed films tend to have broader age appeal: You’ll find women of 16, women of 80 going to see a film and read the book,” said David Garrett, founder and CEO of Mister Smith Entertainment. “Male-skewed movies tend to be more survival or action-oriented and probably more limited in scope in terms of age.”

That’s the good news. On the market front, women-driven projects may be all the rage, but in the festival side of things, where the red carpet premieres are taking place and awards get handed out, it remains male-dominated. Fewer than 28% of Cannes’ official selection of 69 films are directed by women, a number that trails other major festivals such as Sundance or Toronto. Cannes has taken steps to improve representation in terms of gender, with women comprising half of the festival’s selection committee for the first time in its history. But it has appeared somewhat tone-deaf when pressed on its record of prizing male auteurs over female artists.

Others disagree, including Oscar-winning actress Julianne Moore, who generated headlines at Cannes by advocating for stronger measures to ensure gender parity.

“I do believe in quotas,” she said. “I really do. I believe in trying to level the playing field for everybody, regardless of their gender, their culture, their ethnicity. You have to open doors. We’ve been in a culture that’s been one way for a very, very long time.”

Fremaux’s position on quotas may be inspiring fierce debate, but it’s undeniably true that studios have largely ignored women for decades. Study after study has demonstrated that men are far more likely to have lead parts in movies, direct features, and even get a chance to utter a few lines than their female counterparts. But things may be changing. Organizations such as Time’s Up and and movements such as #MeToo sprang up to combat systemic sexual harassment in the entertainment industry, but they also have shamed media companies into acknowledging that they aren’t doing enough to provide platforms for female talent.

“I can see a change in people’s minds,” said Nadine Labaki, the Oscar-nominated director of “Capernaum” at a talk during Cannes. “I can see the change in the fact that the debate is out there, the discussion is out there. we’re really talking about it. Every time a festival director is thinking about his selection, he’s taking this into consideration.”

Stewart Clarke and John Hopewell contributed to this report.