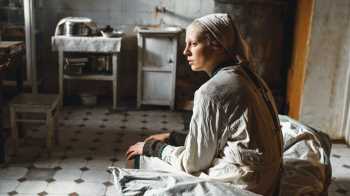 While Kantemir Balagov’s “Beanpole” and Larisa Sadilova’s “Once in Trubchevsk,” both screening in Un Certain Regard, fly the flag for Russian arthouse filmmaking at the Cannes Film Festival this year, the Russian pics in the market reflect the wide diversity of genres being produced in the country.

The 27-year-old Balagov took a Fipresci prize in the same section at Cannes in 2017 for his feature debut “Closeness,” a ’90s-set story of a small-town kidnapping. With the film, Balagov, a protégé of Alexander Sokurov, established a reputation for thoughtful, atmospheric studies of complex characters facing dire struggles.

His second feature, produced by Alexander Rodnyansky, the man behind Andrey Zvyagintsev’s Oscar-nominated films “Leviathan” and “Loveless,” is the tale of two female soldiers looking for hope and meaning in the aftermath of the WWII siege of Leningrad.

The film, being sold by Wild Bunch, offers a more nuanced look at war and its effects than the patriotic tales of heroic wartime endeavors that have held sway at the Russian box office in recent years.

“In his films [Balagov] knows not only every reason and motivation his characters have in every scene, he knows in great detail how they live their lives and how they behave outside of the film — as if they were real people,” Rodnyansky says. “He spends a lot of time trying to get into their minds and to map every impulse and emotion that they have, every psychological trait.”

Sadilova is a veteran in comparison — this is her seventh feature. Past pics include “Love, Lilly,” which won best film at the Rotterdam Film Festival in 2003. Announcing the addition of Sadilova’s latest pic to the lineup, Cannes praised her “refined direction” and “gentle eye.” “Women aspirations, their patience, the courage that has to be displayed towards an always illusory emancipation, desire, frustration, and a certain sense of immemorial fatalism are all examined [in the film],” it added.

In the Cannes Market, meanwhile, movies that are more representative of mainstream moviemaking in Russia are to be found.

The Made in Russia exhibition stand gathers together 17 Russian film companies to show off their latest content. The effort is supported by the state-run Russian Export Center, underscoring the level of state support that many of the highest-profile films from the country enjoy.

To a certain extent, the Russian films in the market reflect the tastes of Russian cinemagoers. There have been a wave of war movies in recent years, with “T-34,” Mars Media’s rousing story of the crews who manned the former Soviet Union’s Nazi-beating tank, topping the country’s box office last year with $36 million. But this year, war films such as “Saving Leningrad” have struggled to meet expectations at the box office. “World War II movies

are [no longer] a sure-fire hit,” Anastasia Bankovskaya of Moscow-based Planeta Inform says.

Russian audiences have cooled too on creepy vfx-laden movies. “I’d say the Russian market has drowned in horrors, both local and imported, thus, instead of building the niche, the box office slid down,” Bankovskaya says.

However, the horror genre remains a hot seller abroad for Russian companies, and Planeta Inform is selling fantasy horror “Queen of Spades: Through the Looking Glass,” set in a spook-filled school, while Central Partnership is presenting “Baba Yaga: Terror of the Dark Forest,” about an evil nanny, and Fedor Bondarchuk’s Art Pictures is offering “The Sputnik,” a chilling tale of mysterious horror in space.

Action remains strong at home and abroad, according to Bankovskaya, with “Coma” and “Robo” headlining the Planeta Inform slate.

Animated family films in particular are a hit with foreign buyers, with upcoming films including “My Sweet Monster” from CTB Film Company, and “My Friend Finnick” from Riki Group.

Local comedies remain popular in Russia, but offer little export potential. So far this year the top local films at the box office are both comedies: “Speakerphone,” a remake of the 2016 Italian film “Perfect Strangers,” and “Naughty Grandma 2.”

Russia’s long tradition of embracing the weird and non-linear continues to produce work that is succeeding abroad.

Anna Krupnova, co-founder of U.K.-based Reason8 Films, says the company’s successful international sales run on last year’s Russian fantasy “A Rough Draft” has motivated it to board world sales on two more Russian-language titles. The first, the supernatural thriller “Stray,” was in competition at the Brussels Intl. Fantastic Film Fest and is based on an original story by Russian novelist and screenwriter Anna Starobinets.

“When we come on board for a Russian-language project [or an international co-production originating from Russia],” says Krupnova, “we primarily look at creative elements, the timing for such a story on the international arena, and the willingness of producers to work closely with us to make the most of international presentation from the early stages of production.”