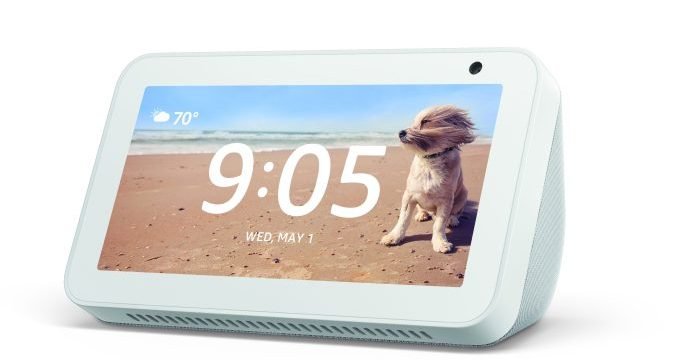 Amazon just made smart displays even more affordable: The e-commerce giant introduced a new version of its Echo Show smart display Wednesday that costs just $89.99. The new Echo Show 5, as it is being called by the company, features a 5.5-inch display, which is about half the size of the company’s full-sized Echo Show with its 10.1-inch display.

In a nod to privacy concerns, the device also features a built-in camera shutter. Additionally, Amazon is introducing new privacy controls for its Alexa smart assistant that extend to all of its existing smart speakers and displays, and are also available to consumers who access Alexa through third-party devices like Sonos speakers or smart TVs.

“The compact form factor is perfect for a bedside table or desk, plus it has a camera shutter for added peace of mind, and new Alexa privacy features for even more control,” said Amazon Alexa senior vice president Tom Taylor.

Speaking of Google: In many ways, the Echo Show 5 seems like an answer to Google’s first smart display, which the company recently rebranded as Nest Hub. With compact form factors, both aim to find a space on a bedside table, or in other environments with limited space. Google’s pitch for this had been to omit a camera from the Nest Hub, which was supposed to make the device more bedroom-friendly.

Amazon’s answer is a physical shutter for the camera of the Echo Show 5, which can be used to cover the camera even while the microphone stays on. Additionally, Amazon aims to ease consumers’ privacy concerns with a new set of privacy features. A new Alexa Privacy Hub site gives users quick access to their privacy settings and past Alexa recordings.

By default, Amazon permanently holds onto recordings captured by Alexa, while giving consumers an option to delete these recordings through its website. Now, consumers can also ask the smart assistant to “delete everything I said today,” and Amazon promised to add a “delete what I just said” command soon as well.

The new Echo show comes in 2 colors, charcoal and sandstone, and will officially be released on June 26 in the U.S., United Kingdom, Germany, France, Italy, Spain, Japan, Canada, New Zealand, and Australia. The company plans to bring it to India in July, and to Mexico in the near future.