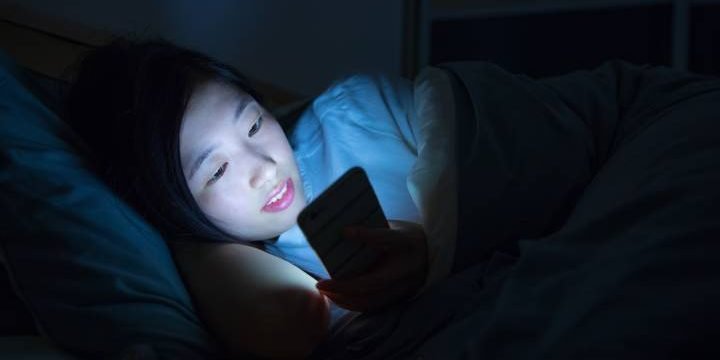 Some teens (and their parents) love their phones so much, they’re taking them to bed.

According to a recent survey by Common Sense Media, a non-profit organization that focuses on education and advocacy around children’s technology use, 29 per cent of children went to bed with their phones.

The survey also looked at parents’ behaviour and found 62 per cent of parents kept their phones within reach of bed (this was about 39 per cent for children).

“Girls tend to sleep with their mobile devices more than boys (33 per cent of girls vs. 26 per cent of boys),” authors found.

Not only were both parents and children checking their phones before falling asleep, but some teens — one in three — were waking up in the middle of the night to check their phones at least once a night.

And while there have been countless reports around how too much screen time can affect a child’s overall well-being, experts say the battle of keeping a phone really comes down to enforcing practical rules.

Be a role model for children

Psychologist Connie Wanlin of Genest MacGillivray Psychologists in Halifax told Global News parents have to become role models in the home, especially when it comes to technology use.

“As our children’s primary attachment model, we as parents need to set the bar and maintain it ourselves,” she said. “Everything that we are expecting of teens we need to make as a priority for ourselves.”

Wanlin said she speaks with many adults with sleep issues and one of her first suggestions is around turning off screens at least an hour before bed.

“I also [know] many adult couples with relationship issues triggered by phones, [and] again, I encourage them to dock the phone when they get home, use it as a landline,” she continued.

“We live in this new world of carrying little computers with us and tuning into them more then we do each other. We are also having to find a balance which can be hard.”

Wanlin added her children nine and 11 do not have cellphones, even though their friends are regular users. “We are trying to lead by example that life can be lived without these things,” she said.

“It may come a time that they are a necessity and then we will likely need to set some strong healthy boundaries around their use.”

Pam Larouche and Elisa Costanza, sleep consultants and early childhood educators of Restful Parenting, said before even buying a phone, parents should set expectations and rules for their children.

“The rules should be set that phones are not allowed in the bedroom overnight,” Larouche said. “Setting that rule ahead of time will help reduce some of the fighting/negotiating.”

She added if the phone is already purchased or being passed down, sit down with your child and lay out the rules before handing over the phone.

“This is also a great time to go over the rules for social media too and passwords,” she continued. “With those expectations we also want to set consequences. If this rule is broken — this is your consequence. Being clear and following through is key.”

With bedtime in particular, start by choosing a set time for children to put their phones away. For example, Larouche recommended putting phones on the kitchen counter at 9 p.m. and giving children a 15-minute warning.

“Ideally all blue light is shut down one hour before bed to encourage healthy production of melatonin.”

Costanza said the rules should be taken seriously.

“Phones are a privilege,” she said. “Parents and children need to remember that. If the rules are broken, the consequences are there and parents need to follow through. Taking the phone will most likely be the only way they fully understand the rules.”

And if it come down to it, parents should not be afraid to take their child’s phone away. Experts added children will be upset, but it is something parents should expect.

“Staying calm, repeating the rules and sticking to it will get you through. Having a guideline of consequences can be huge for both parties as well,” Larouche said.

“Break this rule, lose your phone for two days; break this rule, lose it for the week. Consequences ahead of time give the child the opportunity to make their choice. If a parent has to follow through, it’s easier to say ‘you knew the consequence and you made that choice.’”

Even when children act out, both experts said this comes down to trust.

“[Teens] do need to be monitored and even if you fully trust your child, you have no idea what others are sending, posting or texting,” Larouche said.  “If your child breaks rules, you will be checking in more frequently. If they are following the rules and you are feeling more trust in them, you may not have to check in as often but that doesn’t mean you are completely hands off.”

She said as they change and become a little more mature, you want to keep checking in.

“When you stop checking in will be based on your relationship with your child and how they are managing their teenage years, but in my house, if I’m paying for your phone, I can check in at any time.”