Jochen Chang revealed his inner Prince Charming when he and Leigh-Ann Michelle Laughlin started dating in 2019.

“I found him very chivalrous,” Ms. Laughlin said. “His language was very Jane Austen-y.” It might have been otherwise if she hadn’t put him in a royal frame of mind. “Leigh-Ann looks like Kate Middleton,” he said. “When you meet her she gives you that Princess Kate look.”

Mr. Chang, 33, and Ms. Laughlin, 31, of Chicago, met through mutual friends in Atlanta in 2011. Both had moved there for work. He is now a vice president at Alix Partners, a business turnaround and restructuring company. She is a manager at Deloitte, a professional services company. Neither was single at the time, but when she moved to Houston and he to Chicago the following year, they kept in touch.

“We would talk about our relationships,” Mr. Chang said. When Ms. Laughlin got married in 2012, Mr. Chang flew to Houston for the wedding. When she got divorced in 2017, he was sorry to hear of her heartache. “She was a good friend. I wished her the best.”

Privately, though, his wishes were tinged with longing. “From the very beginning I would talk to my mom and dad about her, how she’s this extremely classy woman and how I wanted to be with someone like that in my lifetime,” he said. In a 2019 text exchange, she told him she was thinking of moving to Chicago. He wrote right back. “I told her she should come stay in my spare bedroom for a week so she’d really get a feel for the city.”

She arrived in August. Halfway through her stay, he confessed his feelings for her. “He admitted that he had always admired me and that he wanted to pursue me,” she said. Ms. Laughlin liked that he had stopped short of asking her whether the feelings were mutual: “It didn’t put any pressure on me, which I appreciated,” she said. “I had always put him in that friend bucket.” 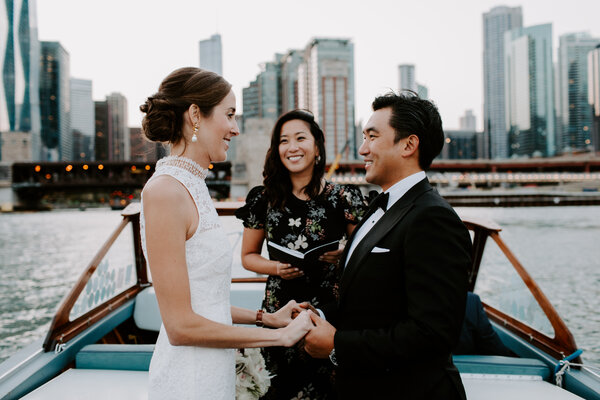 By the time she was heading back to Houston, he was still mostly in that bucket. “We had some great conversations,” she said. “But I was thinking, I’ll consider it. I’ll let it roll around in my head.”

On the plane home, she remembered a list she had drawn up after her divorce of the attributes she was looking for in a future partner. She pulled the list up on her phone. On it were all the qualities she had seen in Mr. Chang that week: worldly, considerate, funny, intellectual.

For the next few months, she allowed him to pursue her long distance. “We were having these deep, thoughtful conversations,” Ms. Laughlin said. His determination was rewarded at the end of the year, when she bought a ticket to Germany to spend the holidays with Mr. Chang and his parents, who live in Frankfurt. She had fallen in love by then, and Mr. Chang’s family drew her in deeper. “His mom was so welcoming,” she said. “We made Asian dumplings and they bought me a beautiful Hermès scarf.”

Mr. Chang planned to propose on a May visit to Ms. Laughlin’s dream destination of Cappadocia, Turkey, but the coronavirus caused him to swivel to a Plan B. On April 19, on the LaSalle bridge in Chicago, he got down on one knee and asked her to marry him. Her yes, he said, was a dream come true.

So was their Oct. 10 elopement on a friend’s boat on the Chicago River, officiated by his sister, Christine Chang, who was ordained by the Universal Life Church. The ceremony put to rest a question he had been asking himself for nine years.

“When you look at someone like a princess, you’re always like, ‘Am I good enough to play her prince?’” he said. When she pronounced them married, he finally felt he was.

“She has brought me so much joy,” Mr. Chang said.