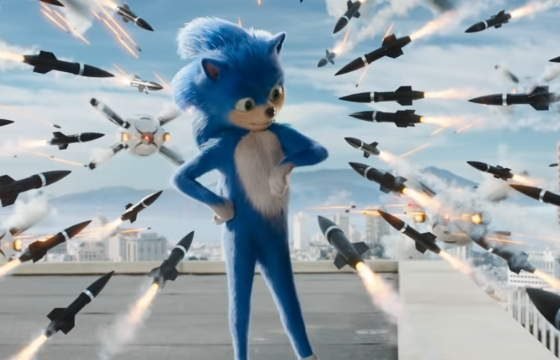 From his weird humanoid child’s body to his dirty white hands with visible fingernails, the CGI Sonic The Hedgehog from the upcoming film of the same name, was a flop right out the gate. People hated it, and many offered helpful suggestions to the filmmakers on where they’d gone wrong. In a surprise twist, the movie’s director, Jeff Fowler, announced that he heard the feedback and that Sonic is headed back to the drawing room for a makeover in advance of the movie’s scheduled November 2019 release, causing 1.5 million (and counting) Game Of Thrones fans’ heads to explode. However, according to The Hollywood Reporter, Sonic’s makeover is going to take a little longer than expected. Turns out you can’t just take a 10 pound shit and shove it in a 5 pound bag. You’ve got to start over, either by taking a smaller dump, or getting a bigger bag.

The new release date for STHH is now February 14, 2020. So maybe they’re planning on filling the bag with chocolates instead, which would be a nice surprise.

About that hashtag, THR says:

When Fowler first announced that Sonic would be redesigned, it led to questions of how the visual effects team would possibly make that happen ahead of the release. In a nod to that question, Fowler hashtagged Friday morning’s tweet this way: #novfxartistswereharmedinthemakingofthismovie”

Even though Jeff didn’t offer any information about what specific changes are being made to Sonic, folks on Twitter noted that Sonic appears to be wearing a glove here, and took that as an indication that Sonic’s previous hairy were-hog hands would be addressed. Now if we could just get a petition started to have them redesign Jim Carrey, this movie just might have a fighting chance.