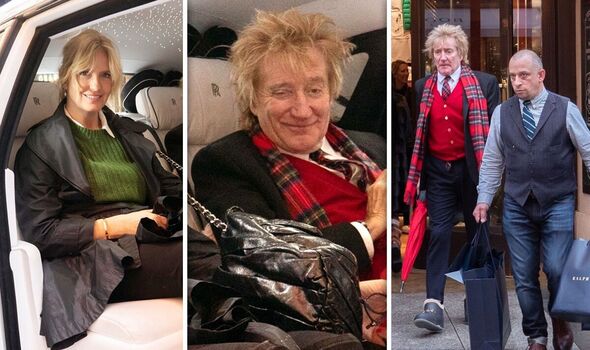 Rock singer Rod Stewart, 77, and his wife Penny Lancaster, 51, did some serious Christmas shopping today in preparation for the festive holiday. The couple looked stylish as they were seen browsing some of London’s poshest shops.

Rod looked dapper in a tartan tie, which he paired with a matching red waistcoat.

The rocker kept warm in a matching tartan scarf, and carried a red Ferrari umbrella.

She paired the look with some pearl, drop-down earrings and carried a Chanel handbag.

The couple were seen outside Ralph Lauren on Bond Street, London, where Penny motioned to her chauffeur to get them their Christmas present from the boot of their white Rolls Royce.

The chauffeur then gave Rod a very large Ralph Lauren carrier bag, which he pretended to drop as if it was too heavy, prompting Penny to burst out laughing.

Rod and Penny emerged from Ralph Lauren three hours later, bringing plenty of goodies back to the car with them.

As the pair left the store, accompanied by Ralph Lauren staff carrying their heavy bags, on-lookers were amazed to see Christine Lampard driving past.

Right as the star passed by, she put her window down and shouted “Hi Rod!” out of the window.

The rock star was wrapped up warm in a matching tartan ensemble for the festive season.

Rod Stewart was accompanied by his glamorous wife Penny Lancaster

The singer looked chuffed as he left Ralph Lauren with an abundance of goodies.

He could be seen walking out of the Bond Street store wearing a red waistcoat, red tartan scarf and tie and a dapper black suit.