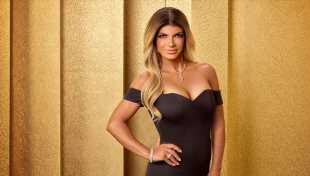 Teresa Giudice was recently accused of throwing a ‘glass of wine’ at sister-in-law Melissa Gorga’s recent fashion show, and now we know why she flipped out while filming ‘RHONJ’.

Season 10 of The Real Housewives of New Jersey is going to be a wild one, as HollywoodLife has EXCLUSIVELY learned why Teresa Giudice threw a “glass of water” (not wine, which was initially reported) during sister-in-law Melissa Gorga‘s recent fashion show — something that was first teased by a fan account on Instagram earlier this week. A show insider told us, “There was a lot of drama captured on camera by the RHONJ cameras at the Envy Fashion Show last week. The most dramatic moment happened when Teresa was standing around talking to fellow friend and cast member Jennifer Aydin. She threw a glass of water as she said she was trying to prove a point to Jennifer and the other housewives, regarding a fight that took place between Margaret [Josephs] and Danielle [Staub] last season when wine was thrown on the cast trip to Mexico. Jennifer then said, ‘OK, you made your point, you’re a crazy b***h,’ but in a playful manner. They weren’t fighting at all and you could tell that Jennifer was not expecting it. She was definitely taken aback by it. Jennifer was the only one to witness the glass throwing, as the other ladies were in a completely separate area. Melissa was backstage getting the models ready, so she wasn’t aware any of this was happening, however, she later confronted Teresa about it at and told her to, ‘Just stop.’”

“Teresa was clearly defending Danielle, which frustrates the other ladies. She doesn’t see the drama Danielle brings to the group. Teresa was getting upset and frustrated because all of the ladies were slamming Danielle, saying she is broke and borrows clothes. They were bad mouthing her constantly and Teresa just had enough and felt the need to defend her. Danielle wasn’t invited to the show and was the only RHONJ cast member not present. Everyone else was their with their families,” our insider added.

RHONJ: Teresa Giudice threw a “glass of water” at one of her Real Housewives of New Jersey co-stars at Melissa Gorga’s fashion show ? UPDATE: It has now been confirmed that Teresa threw a glass of red wine – check Instagram story for picture! Any guesses as to who was on the receiving end?

A post shared byReal Housewives (@realhousewivesfranchise) on May 5, 2019 at 3:10pm PDT

Before we learned these exclusive details, the only tease came from a photo of a broken glass of red wine on the floor of the venue, which was posted by another fan account on Instagram. It’s not exactly clear whether that was the same glass Teresa had thrown, but as you can tell, the next season of RHONJ is going to be pretty wild.