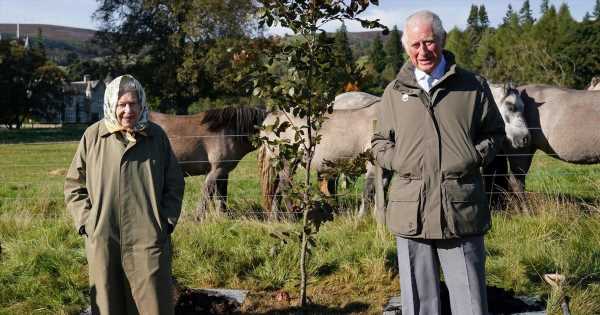 The Queen and Prince Charles have planted a tree at Balmoral Castle to launch the new initiative of the Queen's Green Canopy (QGC).

The Royals got to work with their spades and covered their copper beech sapling in soil, before his royal highness patted the tree and joked: "Let's hope it will survive."

It was the Queen’s first public engagement after her summer break in Balmoral and her first public outing since July when she visited the set of ITV’s beloved Coronation Street.

The Queen wore a sensible ensemble for the occasion in the muddy Scottish field, opting for a calf length green trench coat, one of her staple headscarf’s and green wellies.

Get exclusive Royal News straight to your inbox with OK! daily newsletter . You can sign up at the top of the page.

The event marks the beginning of her majesty’s Platinum Jubilee pledge to create a lasting legacy by planting trees throughout the prime season of October to March.

As the only monarch to achieve the incredible feat of 70 years on the throne, it is set to be a global event to commemorate the Queen’s ascension to the throne on February 6 1952 when she was just 25 years old.

The QGC is a UK-based program to create a nationwide tribute to the Queen’s 70 years of service to the country, by planting a tree in her name.

The hope is that this network of trees will create a lasting legacy to commemorate this incredible milestone with the catchy slogan: 'Plant a tree for the jubilee.'

The corresponding Twitter account shared that the tree the royals planted today is one of 1,500 others that the Queen has planted around the world during her reign.

The mother and son duo were joined on the 50,000-acre estate by young children from the local school, Crathie Primary School for the occasion and spoke to them.

The children were able to explore Balmoral woods and undertake nature projects as part of the QGC scheme.

One of the young girls presented the Queen with a homemade card and a book filled with drawings of trees, which she affectionately received and told her: "I will look at it in the car. Thank you very much."

As part of the QGC, children will also be able to take part in a new education programme and have the chance to receive a Jubilee edition of the renowned RFS Junior Forester Award.

The award promises to give school aged children and young people an insight into Forestry as a career, it includes learning practical skills in woodland management that they can implement in their local community or school.

In recent weeks, Charles has also planted a tree at the Royal Botanic Garden Edinburgh (RBGE) as part of its postponed 350th birthday celebrations.

The event brings the Queen’s first summer alone to an end at Balmoral estate after the death of her husband, Prince Phillip in April 2021 at 99.