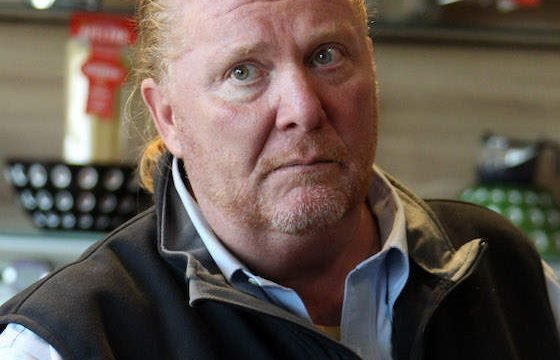 I wonder if the department of corrections offers a prison-issue fleece vest option? Because it sounds like alleged creep-in-Crocs Mario Batali just got one step closer to such a choice.

Back in December 2017, several women came forward in an Eater exposé claiming that celebrity chef and then-host of The Chew (RIP) had served them a plate of sleazeghetti. Several high-profile chefs came forward saying that was Mario’s reputation. Mario gave an apology alongside a cinnamon bun recipe, because apparently no one close to him told him that choosing a bun recipe after he was exposed for alleged groping might not be in good taste. About a year ago, the NYPD got involved and began investigating claims of sexual harassment and assault from 11 women. However, the NYPD closed their investigation in January of 2019 after charges couldn’t be made.

New York might not have found anything on Mario Batali, but Boston did. According to CBS News, a civil complaint was filed in the summer of 2017 in which a woman accused him of assaulting her in a Boston restaurant that year. The Boston Globe says the woman alleges that Mario groped her while she took a selfie with him. She claims he put his arm around her, as one typically does during a selfie, but it quickly got gross, like a congealed plate of chicken parm.

The woman claims Mario grabbed her chest, kissed her face, and touched her groin. The woman claims she stopped taking photos and pulled away, while he tried to pull her in. He allegedly asked her to join him in his hotel room at the Mandarin Oriental, to which she declined. Mario was married at the time. The woman claimed she believed he was drunk, because he stunk of booze. That’s much different than what I thought Mario Batali would smell like, which is rubber, polyester, whatever the opposite of sunscreen is, and cheese.

The woman left the restaurant, and later filed the police report. Boston PD have charged Mario Batali with indecent assault and battery. Mario denies the allegations. He’s expected to be arraigned in Boston tomorrow. If convicted, Mario Batali could face two-and-a-half years in prison, and he’d have to register as a sex offender. If convicted, it also means that we’ll have confirmation that Chef Boyardee has officially lost his title as the Italian-American chef most likely to make you feel super gross inside.