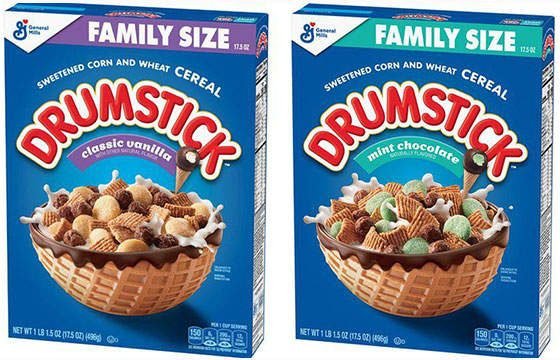 Nearly 31 years after General Mills should’ve been charged with murdering deliciousness and sent to Death Row for discontinuing  the diabetes-summoning magic in a bowl called Ice Cream Cones cereal, they’re trying to right that horrible wrong by bringing us Drumstick cereal! Just in one year’s time alone, we’ve gotten Cinnamon Toast Crunch Churros, the embarrassing fuck effort in milk called Peeps cereal, and Cotton Candy Cap’n Crunch. In possibly related news, one company that makes insulin just put out a half-priced generic version after publice pressure to control prices, so obviously they want more people to get the ‘betes. Yes, the cereal companies are in CAHOOTS with the insulin companies (just call me the gay Erin Brockovich, Erin Cockovich), which leads me to the latest bowl of diabetes conversion nuggets.

Delish says that a small handful of Walmarts, where else, are currently selling Drumstick cereal in Classic Vanilla and Mint Chocolate. The rest of the Walmarts in the country will get it sometime this summer.

Drumstick cereal is made of corn and wheat, and looks like some deconstructed miniature Drumsticks. It’s as thought a serial killer murdered drumsticks, cut up their parts, and then threw them into a bowl. There’s tiny waffle cone bits, tiny chocolate covering bits, and tiny ice cream bits. Sure, General Mills went the lazy and cheap route and didn’t do the 100% right thing by spending the money to hire a team of highly-skilled engineers to find a way to miniaturize full-size Drumsticks, but I’m still going to make my blood sugar levels scream MERCY by swallowing that giant Drumstick bowl and everything in it (it better come with that Drumstick bowl).