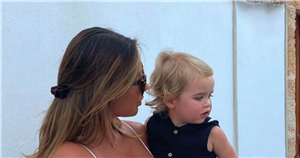 Jess Shears has shared a series of rare photographs of herself with son Presley while on holiday in Greece.

The 28 year old, who found fame on the hit ITV dating show Love Island back in 2017, took to her Instagram feed to first post a single snap of herself wearing a gorgeous white midi dress with wedge sandals as she reached her hand out to her one year old son.

The young tot, who Jess shares with 30 year old husband Dom Lever, could be seen walking all on his own as he donned an all black outfit alongside a pair of matching sandals.

In the caption, Jess told her 1.2million followers: "You guys know the drill ignore the shoes (with this outfit they’re cute with some other outfits)."

The TV personality, who previously shared her excitement at working with Kate Middleton, later returned to post several more pictures of herself with Presley as they explored the tiled streets of Greece together.

In one photo Jess could be seen looking over to her baby boy, while a second saw her leaning against a white wall as she held Presley up in her arms.

A final snap showed the youngster looking away as she held him up in her arms and smiled at him. In the caption, she simply wrote: "My [baby emoji]".

Fans were quick to comment as many were convinced the couple are staying in Lindos. One person wrote: "Lindos is my favourite place in the world," followed by a starry eyed emoji, evil eye emoji and a blue heart emoji.

Another said: "You guys [heart eyes emoji] Jess you are looking amazing," followed by a red heart emoji, while a third added: "He so cute," with a heart eyes emoji.

It comes after the star recently took to Instagram to share a series of pictures of herself in blue lingerie to promote body positivity.

Jess also took the the time to acknowledge the changes her body has been through since becoming a mother in a heartfelt post.

She wrote: "It's taken me over a year and a half to get down to pre baby weight – I mean I've not really tried that hard (I love food way too much) but although the number might be the same my body is far from it.

"Everything has sagged a little, I've not got the same waist I did before, I've got stretch marks and a load of cellulite in places it wasn't before but you know what I'm ok with that."

The brunette beauty went on to share that she isn't getting caught up in trying to change herself, and is taking her time to work on herself.

Jess, who recently enjoyed a romantic date night with Dom to celebrate their two year anniversary, continued: "For me working out to change the way you look is just a viscious cycle of wanting more/to do better/lose more.

"We have started waking up early and training before the baby gets up. It gives us time to ourselves, makes me feel productive and puts me in a good mood for the day."

"It's about being healthy in body and mind more than just an aesthetic," she concluded.

For all your updates on Jess Shears and Love Island 2021, sign up to our Factor 50 newsletter.