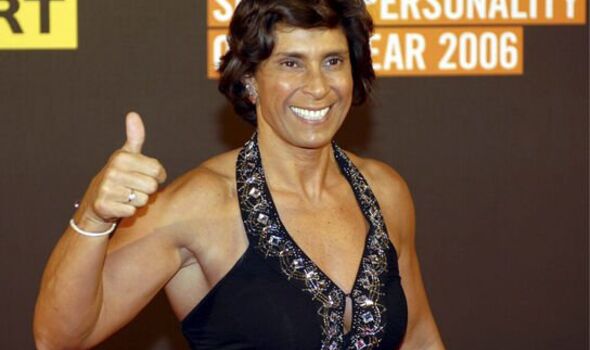 The retired javelin thrower lent her support to campaigners, including Olympic swimmer Sharron Davies, and called for a new category for transgender athletes.

Fatima, who appears tonight in Celebrity SAS: “Who Dares Wins, says if she ever competed against a transgender athlete she would still “kick their a***”.

The 61-year-old also revealed she broke ribs on the gruelling TV challenge, which was filmed in Jordan.

Olympic swimmer Davies has been a vocal critic of transgender women in female sporting events – arguing they have a genetic advantage over competitors born female.

Fatima said: “I’m very much in agreement with Sharron. Hormones definitely play a big part. With my basic knowledge, I still feel that should never be allowed. Definitely not.”

Fatima won silver and bronze medals at Olympics in the 1980s and was world champion in 1987. She retires early due to injury.

Asked if she would compete against a transgender athlete, Fatima said she would be prepared to accept the challenge.

The mum of one said: “I would say, ‘Go on then! Do your best and worst’ because I still kick their a***.

She added: “I know Sharron quite well, she would be the first to say there’s nothing wrong with (transgender females) competing but let’s just get the band or criteria right, a different category that’s how I stand on it.”

While filming the SAS series, Fatima cracked three ribs leaping from a helicopter into the sea but kept quiet so she was not forced off the show. “I never said anything. I just wanted to go through the process and experience what it is like, it’s game over if you say anything.

Fatima is not the only celebrity to have been left battered and bruised by Who Dares Wins.

British boxer Shannon Courtenay, 29, needed surgery after covering up an existing injury to get onto the series, while former soap star Jennifer Ellison, 39, was admitted to hospital after she broke three ribs.

Jennifer said: “After the helicopter jump, I had a pain in my side. When I got back home I went to the hospital they said, ‘You’ve got two broken ribs, you’ve got blood in your lung and you’ve got a bleed in your spleen. I am going to refer you to the surgical team.’”

The ex-Brookside star called the show “inhumane” but credits it with kick-starting her five-stone weight loss.